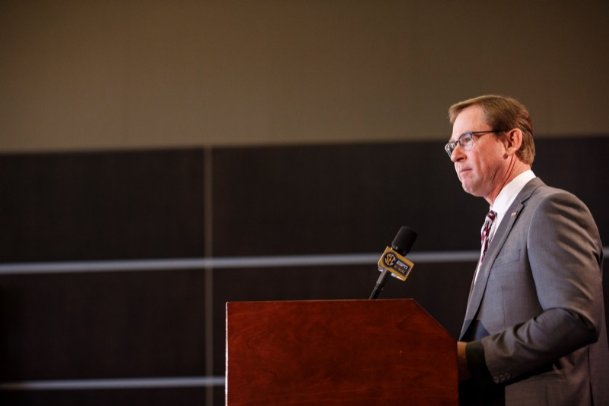 STARKVILLE -- As Davis Wade Stadium sits barren inching through the middle of summer, it remains to be seen when the Mississippi State's football home will be filled once more.

Speaking with The Dispatch Monday, MSU Athletic Director John Cohen said he thinks the school will need to make a final decision on how many fans can attend games this fall around the "30-day mark" ahead of the Bulldogs' opener against New Mexico scheduled for Sept. 5.

Should MSU stick to Cohen's suggested timeline, that would mean a decision would be made in the days around Aug. 1.

"I think the fact that we have some time that we can make some better decisions, that bodes well for us," Cohen told The Dispatch.

While MSU has yet to determine how many fans will be allowed into Davis Wade Stadium this fall in conjunction with what state law will permit, other schools nationwide are preparing for a season with limited capacity.

Monday, officials at Iowa announced that the athletic department would cease ticket sales at the end of this month and only fans who have renewed their season tickets and completed per-seat contributions by June 30 will be incorporated into any new seating plans at Kinnick Stadium.

"We needed to pause additional sales and start focusing on reduced capacity seating models based on our season ticket holders," Iowa Athletic Director Gary Barta said in a news release. "We anticipate finalizing this by late July and will share with our fans."

Earlier this offseason, officials at Iowa State also announced they would only sell 30,000 season tickets to the 61,500-seat Jack Trice Stadium in an effort to incorporate social distancing measures necessitated by the COVID-19 pandemic. It's also expected the school won't sell single-game tickets.

"I think we feel like it's important for all of us to be on the same page," he said. " And the good news is we have some time. So I think it's not necessarily careless, but I think in some ways, it's a little premature to be able to make those decisions."

Cohen also noted that MSU has been in touch with officials at Ole Miss, Southern Miss and Jackson State in regard to how this year's football season could be handled, should it occur.

"We're always talking to other schools and other schools are always reaching out to us," Cohen said. "It's not a bad idea if it's not your own. Other people can have really good ideas. We are in constant contact, we're in meetings with the Southeastern Conference and I think we're constantly bouncing things off of each other."

Having spent eight years as the head baseball coach at MSU coupled with the time he spent playing for former coach Ron Polk in the late-1980s, Cohen has been a part of eight Regionals/Super Regionals held at Dudy Noble Field.

But current and future Bulldog student-athletes may not be entitled to those same events should the Confederate battle emblem remain on the Mississippi state flag.

The NCAA escalated its stance on the Confederate flag on Friday, barring Mississippi from hosting any kind of NCAA postseason event until the controversial iconography is removed from the state banner.

"There is no place in college athletics or the world for symbols or acts of discrimination and oppression," Chair of the NCAA Board of Governors and President of the Ohio State University Michael V. Drake said in a news release Friday. "We must continually evaluate ways to protect and enhance the championship experience for college athletes. Expanding the Confederate flag policy to all championships is an important step by the NCAA to further provide a quality experience for all participants and fans."

With the NCAA levying a major blow to supporters of the Confederate markings emblazoned on the state flag, Cohen sympathized with the student-athletes on campus who may not be able to partake in the regionals he did as both a player and a coach, but added that the decision could also have a staunch economic impact in Starkville.

Having released statements in favor of changing the state flag in recent days alongside MSU President Dr. Mark E. Keenum, Cohen added that the decision to change the state's official banner is now up to the state legislators.

"I mean this is no longer in our hands," he said. "And again, that's one of the things that bothers you is hosting used to be in the hands of the student-athletes and the coaches and their staff. Now it's in somebody else's hands."

With uncertainty regarding football season running rampant throughout college athletics, Cohen said plans for the renovations on Humphrey Coliseum are on hold for the time being.

Should the football season proceed without any major complications, he expects the changes to MSU's home basketball arena to continue as planned, but until then, the school has put the project on pause.

"I mean if we can play seven home football games and if we can get close to full capacity, I think it's realistic," Cohen said. "If that doesn't happen, then it's going to cause delays. So we're in a little bit of a holding pattern to see what football season brings us."