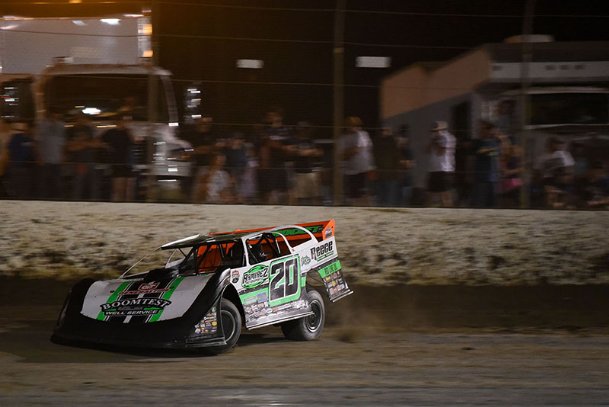 Jimmy Owens makes a turn during the Clash at The Mag on Saturday at Magnolia Motor Speedway in Columbus. Owens placed first and won $15,000. Photo by: Claire Hassler/Dispatch Staff 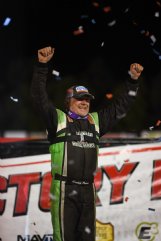 Jimmy Owens stands on top of his car after placing first during the General Tire Clash at The Mag on Saturday at Magnolia Motor Speedway in Columbus. This win marked the 67th career series victory for Owens.
Photo by: Claire Hassler/Dispatch Staff

Jimmy Owens knows no two races at Magnolia Motor Speedway are ever the same.

Track conditions and preparation vary from event to event and night to night, and The Mag's famed "black ice" surface throws a lot of unpredictability into the mix.

But the veteran driver from Newport, Tennessee, didn't have much trouble at the raceway this weekend.

Owens started on the pole, led 93 of 100 laps and won $15,000 with a first-place finish in the Lucas Oil Late Model Dirt Series/COMP Cams feature race at the General Tire Clash at The Mag on Saturday night.

Combined with a win in Friday night's main event and a second-place finish Thursday, and Owens walked away from the raceway's headline weekend with $23,000 cash and some more momentum.

"It's great to get a field of cars with a lot of tough competition, and to be consistently fast all weekend is definitely a big help," Owens said. "It's great morale for the team."

Owens won his eighth race this year and his third on the Lucas Oil circuit, extending his lead in championship points over Tim McCreadie to 160. McCreadie finished 10th on Saturday night.

The race continued a streak of strong showings for the "O Show" dating back to the end of the 2019 circuit.

"We ended the season great and have come out stronger this year," Owens said. "2020 is a good year for us."

Shane Clanton of Zebulon, Georgia, finished second in Saturday's feature, 0.57 seconds behind Owens. Clanton led from the 18th to 23rd lap before Owens overtook him, and a Clanton surge on Lap 81 nearly got him the lead back.

"It got cleaned up there off Turn 2, and I think I found it before he did," Clanton said of Owens. "He was trying to pass some lapped cars and go to the outside. I got a good run and got beside him there, but it was so slick in 3 and 4, and he got back in front of me."

Owens, too, said the track conditions were rough toward the end of the race, making him unsure whether going high to low was his best option.

"We had a great track to race on for the first 70 laps or something like that," he said.

Still, Owens' green and white No. 20 car navigated the ⅜-mile oval track as well Saturday as it did Friday, with the same result both times.

"We were good when the track was slick like this," Owens said. "We were fast all weekend no matter what the conditions have been. Just the hard work of the crew and all that stuff, it all pays off in the end."

After losing the lead to Tyler Erb on the 16th lap, Owens regained it from Clanton seven laps later and soon began lapping cars. That posed a problem, though, when they got in his way.

"It was really tough to do anything with lap traffic and stuff," Owens said. "You don't know where to go, and you just basically have to stay in line and hope the cautions play out your way."

The yellow flag waved on the 21st, 46th, 63rd, 66th and 82nd laps, but Owens was able to shoot off restarts well despite having to slow down to avoid contact with the cars he had already lapped.

Behind Owens and Clanton, Josh Richards, Bobby Pierce and Erb rounded out the top five. Richards, who started fifth, made a late surge to come up third, though he hoped for more.

"Jimmy's been really tough," Richards said. "I feel like if we had a car just a little bit better, we might have had something for him. But hats off to those guys."

On Friday, Richards was second to Owens, while Erb was third. Frank Heckenast Jr. was fourth, and Michael Page was fifth.

Hunter Carroll of Columbus was sixth, and Shay Knight of Steens was 10th.

Mike Pickard of Steens and Knight were 18th and 19th.

Burgess finished ahead of Brett White, Nick Thrash, Colby Ponds of Caledonia and Chance Inman to win the $500 prize.

Thrash, who is from Meridian, beat Carl Kilgore and The Mag promoter Johnny Stokes. TJ Herndon and Heath Minor rounded out the top five.

On Friday, Hayden Matthew Moran of Covington, Louisiana, won a $1,000 prize with a first-place finish.

Fletcher beat out Scooter Ware of West Point, who finished second. Justin King was third, John A. Beard Jr. of Columbus was fourth, and John Johnson IV was fifth.

West Point's Thomas Gable was 16th. Daniel Wiggins of Starkville was 21st, and Bobby Barksdale of Columbus was 23rd.

No local drivers competed in the 13-car race.

Ed Caulder and Judd Murphy of Columbus were 10th and 11th, respectively. Brandon Glenn of Steens was 15th.