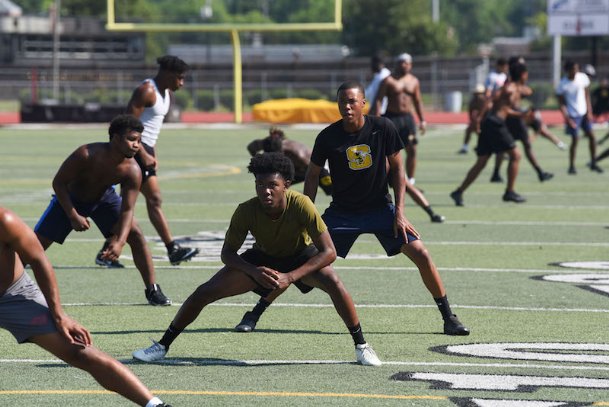 Players stretch during football practice on Thursday at Starkville High School. Head coach Chris Jones said players come to practice in two shifts to keep them spread out due to COVID-19. Photo by: Claire Hassler/Dispatch Staff

Assistant coach Tri Nason sprays weights with sanitizer during football practice on Thursday at Starkville High School. Nason said that the team must clean the weights between each group rotation and any time two players are sharing a set.
Photo by: Claire Hassler/Dispatch Staff 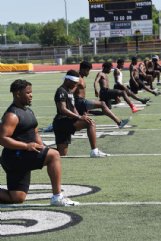 Players stretch during football practice on Thursday at Starkville High School. This was the team's first week back at practice.
Photo by: Claire Hassler/Dispatch Staff 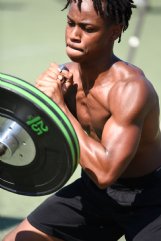 Junior Kamerun Gibson holds a weight while doing squats during football practice on Thursday at Starkville High School. Gibson has been playing football since he was in 8th grade.
Photo by: Claire Hassler/Dispatch Staff

Back when Chris Jones played basketball at Noxubee County High School, offseason workouts were typically along the same lines. The team didn't even use a ball.

"They'd just turn the clock on, and I'd run for hours," Jones said.

Now, with the first week of summer workouts over, the Starkville High School football coach said he feels a similarity to those years-ago runs. This week, Jones has had the Yellow Jackets running and lifting weights on their field, and the team isn't allowed to use a ball until June 29 thanks to MHSAA restrictions imposed because of the COVID-19 pandemic.

But Jones said Wednesday there's no need to rush things.

"It's not honestly that big of a difference other than us not doing seven-on-sevens," the coach said.

Indeed, apart from those drills and being outside rather than inside, not much is different at Starkville High. But adapting to the new restrictions hasn't happened overnight.

"Every day's an adjustment period," Jones said. "Right now, we're just trying to get them in shape."

Senior cornerback Brandon Scott said that wasn't always easy to do at home.

"We can't really work on the stuff that we want to work on because of the coronavirus," Scott said.

He was able to run, do push-ups and use the weight set behind his house, but it wasn't the same as getting on the field and seeing the teammates he missed.

"Being back, it brings a good feeling to you," Scott said. "Like hope."

Jones' squad graduated plenty of talent from a 2019 team that lost to Oxford in the MHSAA Class 6A north state championship game.

And yet Jones is confident the Jackets have plenty of returning experience and talent to succeed as they seem to each year.

Quarterback Luke Altmyer, a Florida State commit, recently accepted an invitation to play in the Under Armour All-America Game. Running back Amariyon Howard is pledged to Mississippi State. Inside linebacker Keyshawn Lawrence and defensive end/linebacker duo Ahmir Taylor and Ronnie Randle will be key pieces, too.

"We've got a lot of kids who played a lot of football last year," Jones said. "We're not having to depend on one or two guys."

While wideouts Joshua Aka, Tae Lucious and Orien Thompson all graduated along with Harvey, Jones pointed to returnees Leroy Hollingshed, Sam Hunt and Stacy Robinson as the best candidates to replace their production.

"We've got some kids who played a lot last year, so we don't have to worry about replacing everybody," Jones said. "We've just got to fill in some spots."

That way, were one player to test positive, Starkville would need only quarantine the players in that group rather than the entire team.

Jones acknowledged that the pandemic has left several key questions unanswered still. He hopes the Yellow Jackets can play a full season but admitted it may be modified or shortened; the MHSAA has given no direction on how many fans can fill the stands at home games this fall, either.

He said until more information is provided to him, Starkville will simply continue what it's been doing: preparing for the season as best it can.

"I haven't been hearing too much about it," Jones said. "We're just going to take it one day at a time. Whatever cards they give us, we're going to play."