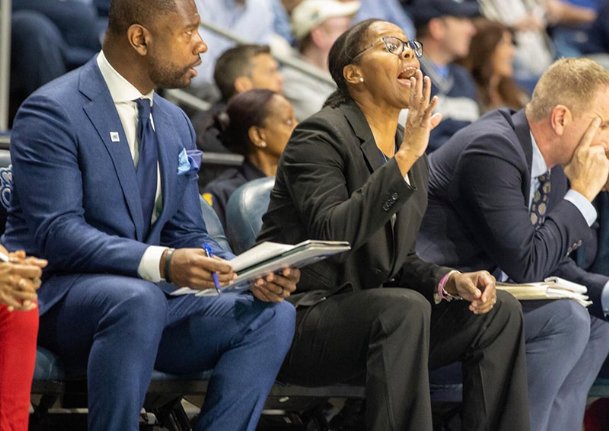 A Tennessee native and former player under longtime UT coach Pat Summitt, Nikki McCray-Pensonâs roots in the area could offer a fertile recruiting ground up the Tennessee-Tombigbee Waterway for Mississippi State. Photo by: Photo courtesy of Old Dominion Athletics

STARKVILLE -- When Nikki McCray-Penson took over for former Mississippi State head coach Vic Schaefer in late April, a foundation for success had been set.

In eight years guiding the Bulldogs before his sudden departure for Texas, Schaefer earned three-straight trips to the Elite Eight or better and took MSU to back-to-back national title games in 2017 and 2018.

And while it remains to be seen what McCray-Penson's on-court prowess will look like in Starkville, she's also borrowed the national recruiting footprint that made Schaefer so successful.

"Vic and his staff have done a tremendous job of making this program very attractive and a place that players want to come and be a part of something special," McCray-Penson told The Dispatch. "For me, it's just continuing to build on that, build on it every single day, getting the top recruits in here every single day."

Over the past three-plus weeks, MSU has earned commitments from five-star 2020 guard Madison Hayes -- who required a second round of recruiting after Schaefer left for Austin -- and 2021 four-stars guards KN'isha Godfrey and Mia Moore. All ranked in the top 100 of ESPNW's HoopGurlz rankings for their respective classes, their varying geography speaks as much to McCray-Penson's strategy as their actual skills.

Hayes, a native Ooltewah, Tennessee, a town just 30 minutes outside of Chattanooga, became the second-straight recipient of Tennessee's Miss Basketball crown to commit to the Bulldogs and marked the first time MSU had corralled players from the Volunteer state in back-to-back years since at least 2007.

A Tennessee native and former player under longtime UT coach Pat Summitt, McCray-Penson's roots in the area could offer a fertile recruiting ground up the Tennessee-Tombigbee Waterway as the Volunteer program hasn't reached a Final Four since 2008.

"She's the number one all-time leading scorer (in Tennessee high school basketball history) and I'm the third all-time," Hayes told The Dispatch. "It's really cool. You know, I didn't expect to play for her but I think it's a really cool connection that we have."

Beyond Tennessee, the Bulldogs have quickly become players in Georgia -- the home state of Moore and rising junior Jessika Carter. Like Tennessee, the hometown Bulldogs have seen their footprint shrink as they've reached just one Elite Eight since 2004 and haven't been to the Final Four since 1999.

With that, Carter -- who finished her high school career as the No. 5 ranked player in the state -- has blossomed into a second team All-SEC performer in her two years in Starkville, while Moore sits as the No. 8 player in Georgia in the 2021 class and should take over point guard duties upon Myah Taylor's graduation.

MSU is also in the recently released top-five for No. 15 overall player and No. 1-ranked Georgia native Kayla McPherson along with North Carolina, Georgia Tech, Arizona and North Carolina State.

Another key cog in MSU's recent pillaging of the Peach State is assistant coach Scepter Brownlee. A one-time graduate assistant for Bruce Pearl at Tennessee, Brownlee spent four years as assistant athletic director and boys' varsity basketball coach at King's Ridge Christian School outside Atlanta after a four year-stint as a men's assistant coach at Georgia State between 2007 and 2011.

"Mississippi State has built with the previous staff from a facility standpoint, from a resource standpoint," Brownlee told The Dispatch. "Everything is in place that you need to be successful. We just want to continue to build on it and raise the standard, a new level of staff here at Mississippi State."

McCray-Penson has also shown an ability to dip into states MSU hasn't had recent success in. With Godrey's commitment on May 29, she became the first Floridian to pledge to the Bulldogs since Iggy Allen in the class of 2016 and LaKaris Salter in the class of 2014.

Entering the 2020 season, MSU will boast 12 players from 11 different states and two countries. And while that geographic diversity was developed under Schaefer, it stands to continue under McCray-Penson.

"He (succeeded) without having top recruits which sometimes is very hard," McCray-Penson said. "But for me and my staff, we've just got to continue to build on the tradition and build on the legacy and bring the right players in here that fit our culture and fit Mississippi State's mission statement."