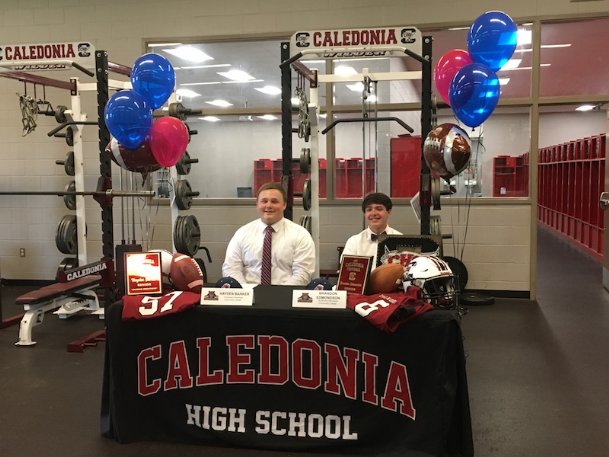 Michael Kelly was looking closely at the helmet his quarterback carried when the realization set in.

"I was looking for this helmet the other day," the Caledonia High School football coach told Brandon Edmondson, "and I forgot you had it."

Edmondson and his teammate, lineman Hayden Barker, had brought in their helmets to help set the stage for Wednesday's signing ceremony. Both players officially celebrated their next step -- playing college football together at Southwest Mississippi Community College -- and, presumably, proceeded to return their helmets to Kelly's custody.

"It's been a dream since I was a little kid," Edmondson said of being able to play at the next level. "I'm just speechless, really."

In front of friends and teammates in the 'Feds' field house Wednesday afternoon, he and Barker were finally able to have a moment Kelly said would have taken place months ago were it not for the COVID-19 pandemic.

The outbreak of the virus affected recruiting contact, visits and communication but ultimately did not stop the pair of Caledonia standouts from becoming future Bears.

"I've always wanted to go somewhere, and I finally get that chance," Barker said. "I've got to prove myself all over again."

Barker did just that in his senior season with Caledonia, learning from the coaching staff and playing both sides of the ball.

"He's a very powerful guy up top, and you can look at him and tell," Kelly said. "I think he'll do a great job at Southwest."

Kelly noted that Barker's future in football is on the offensive line only, something the player was grateful for.

"I'll be able to put more into the one side that I'm gonna be playing, so I'll be better off," Barker said.

Edmondson, too, will be able to bring some continuity from the high school level to the college ranks. The "flex-bone" offense that Kelly has run the past two years in Caledonia translates exactly to what the Bears operate, and that was a factor in the quarterback's decision.

"I wanted to go somewhere where I knew what I was doing, and I knew that I could get into the offense pretty good," Edmondson said.

In that option scheme, timely decisions by the signal caller to pitch the ball or keep it and run are fundamental. Kelly said Edmondson mastered that at Caledonia and is poised to keep it up in Summit.

"He's a tough kid," the coach said. "I think he will succeed in this offense. He's just the kind of kid you need to run what we do and what they do at Southwest."

Edmondson said the college's campus felt like "another home" when he and Barker visited it together two Fridays ago. The pair decided jointly they wanted to attend Southwest, play football there and even room together.

"Just having somebody there to experience it with you who you already know, he's gonna make it a lot better," Edmondson said.

Kelly said having that pre-formed friendship is critical when homesickness inevitably sets in. Summit, after all, is nearly four hours away.

"Playing together, I think, is going to benefit both of them," Kelly said. "Going to play with your friends -- the people you've played with before -- is always a benefit."

The coach said he was glad Barker and Edmondson finally got to celebrate their accomplishment Wednesday and hopes for more events of that nature down the line.

"We're happy for these two," Kelly said. "We're looking forward to the future of our program and many more of these signings to come."