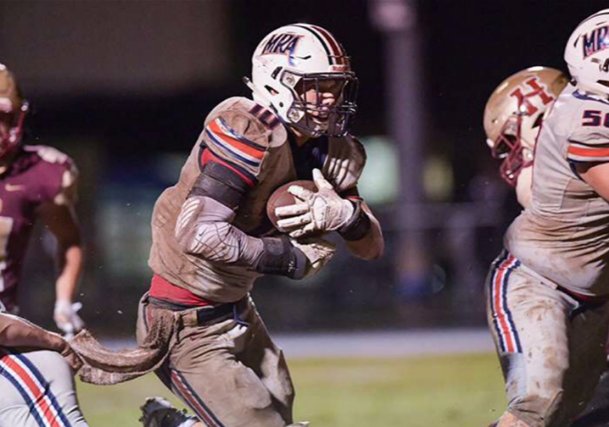 Madison-Ridgeland Academy running back and linebacker Stone Blanton (center) is one of a number of players Mississippi State is recruiting for both football and baseball between the 2021 and 2022 classes â including four-star quarterback commit Sawyer Robertson. Photo by: Photo courtesy of Stone Blanton

STARKVILLE -- Madison-Ridgeland Academy linebacker Stone Blanton raced through the tires placed before him.

With a swift swing of his left leg, Blanton sped out his break and weaved up and back through the percolating rubber circles. Upon reaching the final tire, he began side-stepping back through the hole in each toward his starting position. One final length down the tires involved tapping them with each individual step before sprinting through the finish line.

Hours later and 47 miles down Interstate 20 from Vicksburg where he spent the morning at the Elite Underclassmen Camp, Blanton stared down the third base line at Trustmark Park in Pearl -- the home of the Double-A Mississippi Braves.

With a swift stroke and a raucous ping off his bat, he sent the ensuing pitch left high in the zone over the left field wall for a home run.

"Even when he was younger he was doing a bunch of different activities," Madison-Ridgeland baseball coach Allan Pavatte told The Dispatch. "I mean he was doing karate, playing football, playing baseball, playing basketball, running track -- just doing a multitude of things -- and he just has the discipline and maturity to balance all of those things out."

Just a glimpse into Blanton's long standing dual-sport endeavors -- an undertaking further manifested by the dueling football and baseball action photos in his Twitter profile picture and header, respectively -- he's one of a handful of prospects between the 2021 and 2022 classes that could be balancing time between Davis Wade Stadium and Dudy Noble Field over the next two recruiting cycles.

"We don't do it necessarily so they play multiple sports here, but we like high school athletes that do play multiple sports," MSU Senior Associate Athletics Director for Football Dave Emerick told The Dispatch of recruiting multi-sport athletes. "So much of today is specialization and only playing one sport and then training in that sport all year-round. It's good to see kids in their high school careers playing multiple sports just always competing, striving to be the best in the sport that they're playing."

Helping Madison-Ridgeland to the Class 6A Midsouth Association of Independent Schools state football title last fall, Blanton spent as much time juggling his time at running back, receiver and linebacker as he did maintaining his baseball shape.

Throughout the fall he spent the afternoons with the football team before adding thrice-weekly batting practice sessions to prepare for the impending baseball season -- one in which he'd hit .257 with 10 RBIs and a .312 on base percentage in just 32 plate appearances before being canceled due to the COVID-19 pandemic.

Chasing a future on the diamond, Blanton attended recruiting camps nationwide. For those who couldn't see him in person, he tagged coaches in the film he posted on Twitter in hopes of piquing their interest.

Rated the No. 7 player in Mississippi by Prep Baseball Report along with fellow MSU football/baseball prospect and Canton Academy standout Dakota Jordan -- the No. 2 baseball player in the state who also received football offers from both Ole Miss and MSU in late April -- Blanton committed to the Bulldogs on Jan. 23.

But as the winter turned to spring and football season flipped to baseball, his collegiate looks on the gridiron blossomed. Committing to the MSU baseball program on Jan. 23, he's earned nine Power Five conference football offers since the middle of April.

"It's a blessing for sure," Blanton told The Dispatch. "I'm glad I'm in this position. I feel like I've worked really hard and it's good to see hard work pay off."

Like Blanton, 2021 quarterback commit Sawyer Robertson has spent the majority of his high school career balancing his dual-sport future.

The son of former Montreal Expos first round pick Stan Robertson, baseball has long been the younger Robertson's purview. It wasn't until a transfer from All Saints Episcopal School to Irons Middle School as an eighth-grader that he was even allowed to play football, much to the behest of his mother Angela.

Sticking at quarterback due to his background as a pitcher, Robertson struggled to throw a spiral through his first fall under-center. A freshman year in which he completed just 14 passes followed.

Completing 313 of 483 throws for 3,564 yards and 43 touchdowns to just seven interceptions in his third year of football, Robertson's recruiting profile gained headway as a sophomore. After throwing for another 3,914 yards and 44 touchdowns as a junior, he landed 16 reported scholarship offers and is rated as the No. 136 player in the 2021 class according to 247Sports Composite.

With football quickly boosting his national recruiting stock, Robertson maintained an itch to play baseball at the collegiate level. Settling on a final list of MSU, USC and Texas, he discussed the prospect of playing both football and baseball with all parties.

Ultimately, it was phone calls from MSU coach Chris Lemonis and hitting coach Jake Gautreau that sealed both his football and baseball fates.

"The fact that he got phone calls from both of the coaches -- the head coach, as well as the assistant coach -- there at Mississippi State, that probably had a lot more to do with (his commitment) than I think anybody will probably give it credit," Stan Robertson told The Dispatch in April.

An open line of communication

While Robertson is the lone commit of MSU's three major dual-sport targets in the next two recruiting cycles, the process in which the Bulldogs covet potential baseball/football recruits remains a mixed effort.

With college baseball teams limited to just 11.7 full scholarships to be divided between as many as 27 players on a 35-man roster, prospects like Robertson, Jordan and Blanton are generally placed on football scholarships to allow more flexibility for the baseball staff. Visits to campus also generally include tours of both teams' facilities.

On a clerical front, coaches in both sports maintain a constant line of communication across the parking lot of the Leo Seal Jr. Football Complex and the baseball offices at the foot of Dudy Noble Field to ensure players aren't reached more than allowed by the NCAA and to maintain a unified selling point on the school.

"We want them to succeed just as much as they want us to succeed," Emerick said. "So we have a common goal with the baseball team here."

Though there isn't a long line of baseball/football players at MSU in recent years, rising sophomore Brad Cumbest is the preeminent example of the process. Splitting time as a tight end and outfielder over the past two seasons, Cumbest was set to go through 7-8 spring football practices in the midst of baseball season through an arrangement the respective staffs had worked out.

"I think he's shown that you can do it and be successful at it," Emerick said. "And I think it is a blueprint for those guys in the recruiting process that we can definitely use."

Heading into the summer, Robertson continues to hear from USC and Texas -- though he's remained firm in his commitment to MSU for both baseball and football. Blanton and Jordan are also still Bulldog baseball commits for the time being, but will explore their football options.

"I imagine it'll be similar to what I do (now)," Robertson prognosticated of his future in Starkville back in April. "That means during football season going in and taking a few hacks, taking some batting practice, and then in baseball season always making sure that I continue to throw the football because the release is different, obviously. It's just kind of maintaining the other sport while I'm playing the other season."

And while it remains to be seen who out of the multi-sport trio plays under the lights at both Dudy Noble Field and Davis Wade Stadium, all three will have the opportunity to do so -- though they won't necessarily be scoring touchdowns and hitting home runs on the same day.