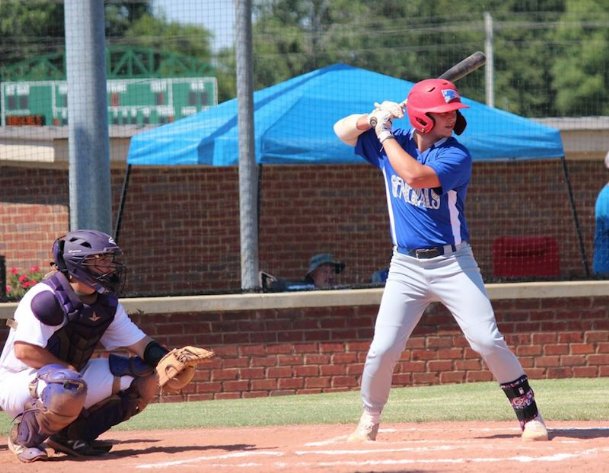 Heritage Academy graduate Blayze Berry stands in for the Hill Country Generals during a game Saturday at BNA Park in New Albany. Berry, who has signed with Mississippi State, is one of 11 Generals players who hails from the Golden Triangle area. Photo by: Courtesy of Cotton States Baseball League

Trailing the North Delta Dealers 1-0 heading into the bottom of the seventh and final inning, the Hill Country Generals loaded the bases with nobody out, threatening to tie the game.

For the Cotton States Baseball League club, which features 11 area players, Sunday's narrow shutout loss was a frustrating reminder that one aspect of the team hasn't fully developed yet.

"Our pitching's way ahead of our hitting," Generals coach Jeffrey Cook said.

But Cook, the former baseball coach at Columbus High School, said that those bats will come with time. This spring's high school graduates are still getting used to wood bats rather than aluminum, and they're adjusting to facing live pitching for the first time in three months.

"We've got a good team, a good group of guys who are playing hard," Cook said. "It's just taking a while for some of them to get back into the swing."

Through two weekends of play at BNA Park in New Albany, only three Generals are batting above .250: Robert Akines Jr. of Memphis, Miller Hancock of East Webster and Ryan Burt of New Hope. All three are hitting over .400.

Consequently, it's the pitching that has helped the Generals to a 3-3 record in the summer season's first six games. Five hurlers -- including Burt, Caledonia's Tony Brooks and Heritage Academy teammates Blayze Berry and Banks Hyde -- have yet to allow an earned run in at least three innings of work apiece.

"We'll be very competitive with the arms that we have," Cook said. "When our bats catch up, we'll be pretty tough to beat."

Cook said Burt, a Pearl River Community College signee, wasn't sure whether he would get to pitch in college as well as playing first base. After seeing the lefty's solid stuff so far -- including a "plus" change-up and breaking pitch and a solid fastball -- Cook called Pearl River coach Michael Avalon to tell him how well Burt had done and confirm Burt would have a chance to play both ways.

It wasn't the only similarity between the Cotton States league and what its players will face in collegiate competition.

After Cook plugged Brooks -- an East Mississippi Community College signee -- into relief of Burt in the fourth inning of Sunday's game, Brooks got out of a two-on, none-out jam with a flyout and a ground-ball double play.

Being tasked with just one inning, Brooks had just gotten a taste of the "relief mode" he will be likely to see in Scooba, Cook explained when he pulled the player aside afterward.

"This is exactly the way it's gonna be for you in college," Cook told Brooks. "You're gonna come in for an inning, and your job is done. ... You're facing guys you're gonna see next year.'"

Cook said one team the Generals have faced consists of five NCAA Division I players; another has a D-I pitcher who touches 91 mph.

"The league is really, really good this year, and it's exciting to play in," Cook said.

Of course, his team brings its own talent to the mix. The Generals are fifth in the standings for the 10-team league, and they're earning contributions from up and down the roster.

Caledonia graduate Cade Stacy, now at EMCC, had a good first outing, and New Hope grad Stallone Shelton looked solid on the mound. Beau Bates, who went from Caledonia to Scooba with Stacy, is figuring things out. New Hope's Rye McGlothin, now teaming up with Bates and Stacy in college, had a stellar first weekend. And fellow Trojan Presley Hall, who is signed to Southwest Mississippi Community College, has made some good plays, Cook said.

The coach promised it's only bound to improve as his players continue to get back into a routine after their long layoff. Mostly, Cook said, they're simply happy to return to the field.

"They're just excited to be outside playing the game they love," Cook said.

How other local players have fared