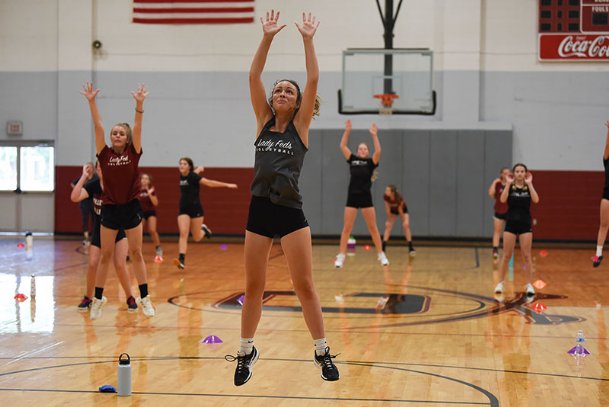 Senior Ella Clark practices blocking during volleyball summer workouts on Wednesday at Caledonia High School. âI have faith in us this year,â Clark said of their upcoming season. Photo by: Claire Hassler/Dispatch Staff

Volleyball players stand spread out during summer workouts on Wednesday at Caledonia High School. The team focused on basic conditioning and muscle memory drills during the first week of workouts because they werenât cleared to use volleyballs due to COVID-19. The team will begin practicing with balls next week, and each player will have their own to minimize sharing surfaces.
Photo by: Claire Hassler/Dispatch Staff

Volleyball coach Samantha Brooks talks to the team while they stretch after a workout on Wednesday at Caledonia High School. âWeâre ready to jump into it and get going,â Brooks said of starting summer workouts after some delays due to COVID-19.
Photo by: Claire Hassler/Dispatch Staff

CALEDONIA -- Caledonia High School volleyball coach Samantha Brooks knows there's pressure -- some of it from her -- for her team to keep up the momentum after a historic season last fall.

But that's nothing new.

"We set the bar high, and we have high expectations, and it's been like that for years," said Brooks, who enters her 14th year coaching the team.

Brooks said the assumption of success is exactly why more than 30 players turned out for Wednesday morning's socially distanced workout in the Caledonia gym, a sizable crop that the coach was happy to see.

"We let them know what's expected, and you can see how many girls turned out for workouts because they know what the expectation is," Brooks said. "We expect to try for state."

In October, the 'Feds got closer to that goal than ever before, reaching the MHSAA Class 4A final four but falling to Vancleave in straight sets. And this spring, the seven seniors who were fundamental in getting the team to that point graduated: Tori Brooks, Camryn Johnson, Ansley Brown, Maddy Suggs, Olivia Boykin, Kennedy Lambert and Shawntel Matthews.

"They were the heart of this team," said outside hitter Zoe Hansen, who will be a senior this fall. "I love them. It makes me sad."

Caledonia's departed seniors aren't far away. Tori Brooks was even present Wednesday, doing burpees and mountain climbers and working on footwork with her former teammates before heading off to play for Itawamba Community College this fall.

But the returning 'Feds know things will be different, and they're staying confident in their own talent.

"It's not like I don't have faith in us; it's just that we lost so many people last year," rising senior setter Ella Clark said. "But I'm glad to see us all getting back together."

'A little bit behind'

Of course, the 'Feds can't get quite as close together as they used to. Physically, anyway.

On the polished hardwood floor of the high school gym, Caledonia players were spread out six feet apart, anchored to multicolored cones and beanbags on the floor that marked their spots.

It's one of the social distancing measures required if Caledonia hopes to work out and play this fall, but players said it certainly takes some getting used to.

"Having to stay six feet apart and all that stuff, it's a lot weirder," rising senior middle hitter Megan Chandler said. "Sometimes, I feel like I want to walk up to somebody, but I can't."

The 'Feds also can't incorporate a ball into their workouts until their two-week acclimation period ends Monday.

The past two weeks, the team has been running, doing exercises designed to strengthen their cores -- a critical aspect of volleyball -- and working on their stances, footwork and serving position.

Coach Brooks said she's been waiting a while to use a ball again but that playing without one emphasizes important aspects of the game as well.

"The good thing about not having a volleyball in hand is that we're able to pay attention to what our bodies are doing, because in order to be consistent, you have to have the correct form," she said.

Usually, her team is fully formed and practicing by this time of year, but Brooks said Wednesday that she likely won't be able to hold tryouts until early August, just a few weeks before the start of the season. Although she said Caledonia is still ahead of several school districts that have yet to start their workouts, the 'Feds are "a little bit behind" others.

"I think everybody kind of feels that," she said. "We're a little bit behind, and so we need to just push forward and do everything we can do to be prepared."

Caledonia's players don't care if they're behind, though. They're just happy to get on the court again.

"I've missed it so much," rising senior Alexa Lindsey said. "I missed volleyball and just hanging out with everybody. I just love it."

Libby McMurphey and Kordelia Bergstrom join Hansen, Clark, Chandler and Lindsey to round out Caledonia's six-player senior class this fall. All of them have years of practice playing together on club, middle school and junior varsity teams.

"We have so much commitment and trust in each other that it's just comfortable, and we just work really well together," Hansen said.

But the players acknowledged that the verbal leadership displayed by the prior crop of seniors is still in the making, and so did their coach.

"The experience is pretty much there," Brooks said. "Vocally, I think they're a little more timid than last year's senior group. But I'm excited to see what's going to happen when we actually get on the court and see how they interact with each other and push each other and work together."

McMurphey said continued team bonding over the summer will help her senior class get to that point. Already, the seniors play at the sand court at Ola J. Pickett Park across the street, and last week they went to Hansen's house to play at her court.

"We lost a lot, but we have a lot to give," she said. "I think we'll do really good -- a lot better than everybody thinks we'll do this year."

Of course, it's not just seniors set to buoy the 'Feds this fall. Juniors Lily Rose Nodine, Kaydence Sudduth and Madalyn Dvorak all play sports year round and have channeled their talent into volleyball, Brooks said.

"That's really important: to not just be a volleyball player, to have that other background," the coach said. "It makes you a little bit more well rounded."

Brooks said sophomore Emily Clark has impressed mightily and looks poised to make the leap to the varsity team this year. A "natural setter" with great court sense, Clark has known she could be standout setter Camryn Johnson's replacement even since last year.

"Can we run quicks?" Brooks remembers Clark asking her as a freshman on the JV team last fall. "Can we start running these things? Because Camryn's leaving next year, and we really want our offense to look like it should."

Ella Clark, Emily's older sister, said her younger sibling is "really deserving" of being on the varsity squad, even though both play the same position.

"It's gonna be weird because we're both setters, so I really don't know how that's gonna play out, but I'm really excited for her to be on the team," Ella Clark said.

Even the few Caledonia players who were out of town and couldn't make workouts over the past two weeks showed their dedication to the team, asking Brooks for instruction on what they could do individually. To the coach, it's one more sign that everyone -- from players to coaches to school administration -- is ready to take a shot this fall at following up last year's success, no matter the obstacles.

"We know we have to follow the guidelines and be safe, and we understand that," Brooks said. "But we are just champing at the bit to go."