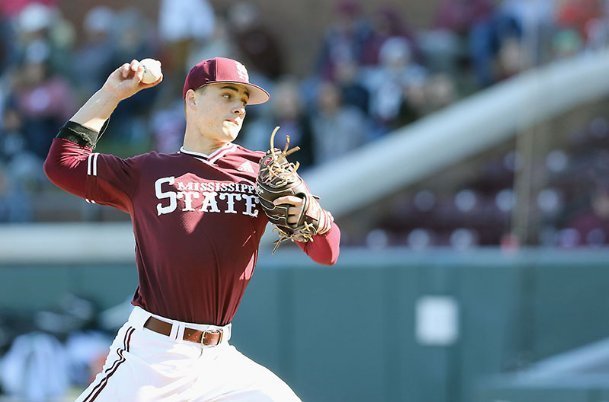 Mississippi State sophomore JT Ginn made only one start this season: Feb. 14 against Wright State. Still, Ginn was drafted in the second round Thursday by the New York Mets at No. 52 overall after undergoing season-ending elbow surgery in March. Photo by: Jim Lytle/Dispatch file photo

STARKVILLE -- Following a night in which Mississippi State juniors Jordan Westburg and Justin Foscue and Bulldog signee Austin Hendrick were selected in the 2020 MLB Draft, two more players associated with the program were taken on the event's second night.

Dropping 22 slots from where he was taken during the 2018 draft out of high school to No. 52 overall on Thursday, sophomore pitcher JT Ginn was the first Bulldog off the board, joining former MSU players Jake Mangum and Cole Gordon in the New York Mets organization.

The final collegiate prospect associated with the maroon and white selected, Ginn entered the draft as the most polarizing of any MSU player or signee available. Having undergone season-ending surgery, Ginn hasn't had any reported setbacks in his rehab, but the procedure may have accounted for the slide.

Injury questions aside, the former Brandon standout dazzled onlookers when healthy during his prolific, albeit short, MSU career. In his first year in Starkville he earned national freshman of the year honors from Perfect Game.

Falling to No. 89 overall to the Boston Red Sox, 2020 signee Blaze Jordan was the next Bulldog off the board.

Having been on the MLB's radar since he committed to MSU as a 13-year-old eighth grader, Jordan's value varied widely entering the draft. Boasting unmistakeable power, Jordan won the MLB high school home run derby at just 16 years old. Reclassifying to be eligible for the 2020 Draft, he hit .440 with 46 RBIs and 10 home runs in just 37 games during his sophomore campaign at DeSoto Central.

"He's got real, real, real juice -- all you've got to do is pull up YouTube and see that he's got a good chance to hit," Perfect Game National Scouting Supervisor Brian Sakowski told The Dispatch. "I think that he wants to get drafted, and somewhere in the second round is probably most likely. He's got some things working in his favor. He's performed really well, and he's obviously super young having reclassified."

"The draft models love that he has a long track record, he has exit (velocity) and power, and he's super young for his class -- which is like the No. 1 thing these models round up on," ESPN Baseball Insider Kiley McDaniel added.

Given his youth at just 17 years and five months entering the draft, Jordan wouldn't be eligible to be taken again until after his junior season in Starkville. It remains to be seen what a deal over the next few days would pay him, though his slot value was set at $667,900 -- a number it's expected will need to be exceeded in order to get Jordan to spurn his commitment to MSU.

"The indications are that basically into the middle of the second round he's expected to sign and sign for slot (value), and then later in the round it's a little bit different," McDaniel told The Dispatch earlier this week. "...I don't know if there's a specific (signing bonus) number, but if he goes in the top 50 or gets top 50 money, he probably goes (pro)."