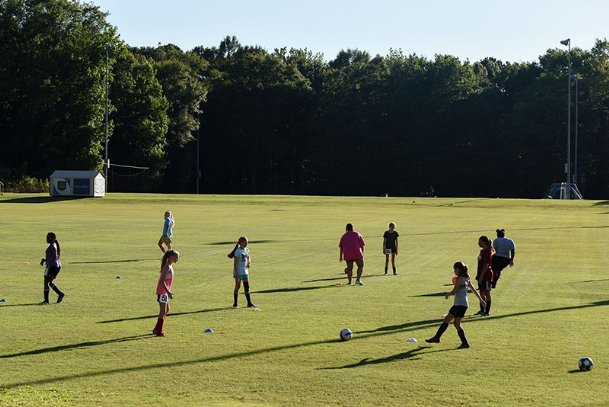 Soccer players try out for Columbus United Soccer Club competitive teams Thursday evening at the Columbus Soccer Complex. This was the second day of tryouts, and it lasted for an hour and a half. Photo by: Claire Hassler/Dispatch Staff 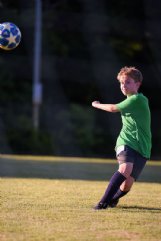 Hutch Clemons, 11, watches the ball after he kicked it towards the goal during tryouts for Columbus United Soccer Club competitive teams Thursday evening at the Columbus Soccer Complex. Clemons was one of 107 kids trying out this year, while around 20 opted out of tryouts.
Photo by: Claire Hassler/Dispatch Staff 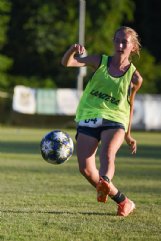 Peyton Hughes has been ready.

Peyton, who will be a fifth grader at New Hope Elementary this fall, was unable to play the sports he loves -- baseball and soccer -- during the COVID-19 pandemic.

Now, his baseball league is happening again, and as of Thursday evening, so is soccer -- giving Peyton another chance to get out on the field.

"He's definitely excited to get back out there and do what he likes," his father, Drew Hughes, said.

Peyton, who participated in Thursday's Columbus United Soccer Club tryouts at the Columbus Soccer Complex, is one of 130 players interested in playing competitive soccer with the organization starting this fall. And he wasn't the only one who's a little out of practice.

"For a lot of these kids, this time is the first time since March that they've touched a soccer ball," Columbus Soccer Organization President Tom Velek said.

Velek said 107 players aged 8 to 17 participated in tryouts held Saturday and Thursday at the soccer complex, with 20 opting out because of vacation or concerns about safety. Columbus United coaches will contact the past coaches of players who opted out to gauge their skill level.

Drew Hughes was among the majority, saying he felt perfectly safe letting Peyton get back on the field.

"I feel good about it," Hughes said. "I feel like it's definitely time to let these kids get back there and do what they enjoy. I'm looking forward to it."

Players who earn a spot on a team roster must accept by July 6, and practice will begin around the start of school in August. The season starts with a September tournament.

Those new faces aren't just from Columbus, either. A sizable contingent from Caledonia and New Hope joined players from Starkville, Hamilton, Amory and even Pontotoc -- with players split fairly evenly between public and private schools.

"We're doing what we want to do, which is attract the best players around," Velek said.

Emma Parham, an incoming seventh grader at Caledonia Middle School, said she signed up to try out knowing the talent within the club team.

"That's a really good team, and a lot of people are really good," Parham said.

Before an informal scrimmage to end the evening and a team passing drill, Parham and the other girls in her group lightly passed the ball back and forth to a partner. Velek said the drill was a simple one to let the group's two talent evaluators judge how technically sound the players were. Technical skill is one of four things Velek and his coaches look for, apart from tactical, physical and mental expertise.

"How well can they receive a pass?" Velek said. "How well do they play a pass?"

He said the girls side of things looked particularly talented. New Mississippi University for Women head coach Catie Lyles will be leading the 18-and-under team, with Velek himself coaching a "strong" U16 squad.

Though the same number of players signed up to play competitive soccer this year and last year, things naturally look different as a result of the pandemic.

Velek said every player who registered filled out a questionnaire screening for the virus and had their temperature taken before participating. He also sanitizes the bathrooms at the complex before players come in toting their own water bottles so as not to spread the virus.

And instead of players pulling pinnies -- bright yellow practice vests -- on and off at will, they're assigned one pinnie each and also have numbered bibs pinned to their shorts.

"We're taking all those precautions to try to ensure that the kids are safe," Velek said.

He also noted that Columbus United offers parents an option to pay registration fees in three parts. Unlike other clubs with the same choice, though, there is no extra charge.

Beth Clark, whose daughter Izzy Clark tried out Thursday, said the resumption of soccer was a way for Izzy and her fellow players to start returning to normal.

"They're ready to be back with their friends and playing soccer and getting back into their routine," Clark said.

Velek said he gave all his players free access to the Techne Futbol app, which offers distance training in the sport, but that coming back to dribble and pass and shoot on the pitch with teammates has no equal.

Heritage Academy rising freshman Chloe Boyd, who plays under Velek with the Patriots girls team, summed up the "fun" of Thursday's return simply.