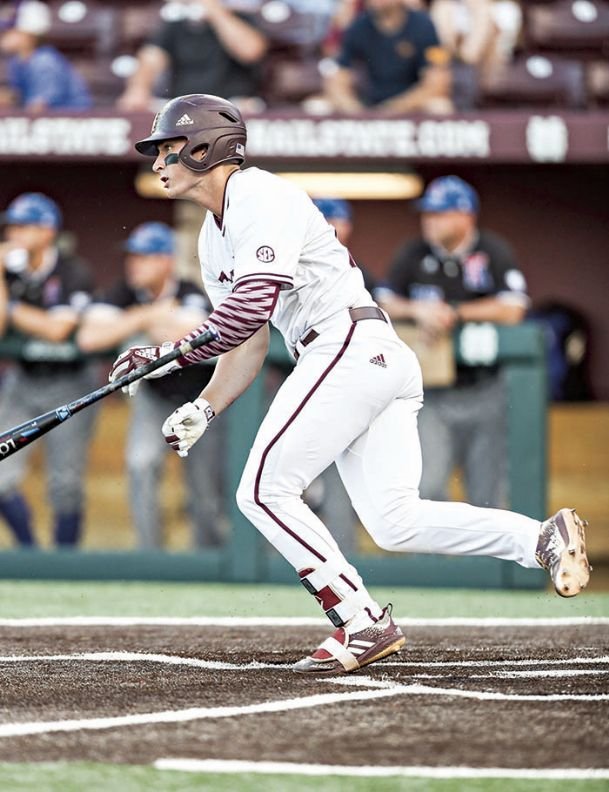 STARKVILLE -- The next wave of Mississippi State players have hit Major League Baseball.

Wednesday night, current Bulldogs Justin Foscue and Jordan Westburg were taken in the first round and competitive balance round, respectively, while signee Austin Hendrick went No. 12 overall.

Here's how the night unfolded:

The flashier of MSU's middle-infield duo in this year's draft, Jordan Westburg has all the tools to be an impact player at the major league level.

Standing 6-f00t-3 and weighing 206 pounds, the New Braunfels, Texas native hit .317 with six doubles, two home runs and 11 RBIs in the COVID-19-shortened 2020 campaign following a summer in which he hit .326 for the Hyannis Harbor Hawks of the Cape Cod League.

And while Westburg has shown improvement in recent months at the plate, his 2019 batting numbers were a slight concern for MLB teams. Batting .294 with 21 doubles and 61 RBIs, he notched just six multi-hit games over his final 30 regular season contests.

The profile is there for Westburg to be a multiple-time all-star at the next level, but he'll have to get more consistent at the plate to do so.

"Westburg is a little more tools over performance, but he also doesn't have a lot of reps in summer showcase, high-level stuff. He's continued to improve and so there's a lot of teams that are model-driven and see his big metrics in terms of exit velocity, speed, size, raw power, and then see his improving stats." -- Kiley McDaniel, ESPN

Justin Foscue is the highest floor, lowest ceiling prospect out of Starkville this year. A prolific hitter and solid fielder, Foscue's bat will appeal to teams given the power he possesses in the infield.

In 67 games last season, the Huntsville, Alabama product hit .331 with 14 home runs and 60 RBIs before spending the summer with the USA Baseball Collegiate National Team in Japan.

The biggest question mark with Foscue is where he'll play in the field at the next level -- be it second or third base -- but he's a decent enough fielder he'll stick with a pro ball club.

"Foscue's got such a strong hit tool projection, and even if the power is an average tool for him at the major league level, that's still the expectation of a really high average, high on-base hitter with 15-20 home runs -- and if he gets to that and he's going to make some all-star teams. The pressure is a little bit more on Foscue's bat, but in that same vein that's also his strongest tool." -- Brian Sakowksi, Perfect Game

And so the first class of 2020 MSU commit is off the board. In a class loaded with left-handed hitting prospects, Austin Hendrick is among the best.

One of the nation's top recruits out of West Allegheny High School in Pennsylvania, there was little chance he ended up at MSU based on mock draft projections and that should remain the case. Hendrick does have some slight swing and miss tendencies that might have scared a few teams off, but he still profiles as one of the best high school bats in this year's shortened draft.

"He reminds me of Bryce Harper now...the left-hand hitting right fielder who provides value in the outfield, but whose profile is built mostly around his power. He takes a super violent swing, and he's got maybe the best raw power of the prep class, at least from the left side. That's a guy that's going to hit and hit for power." -- Brian Sakowski, Perfect Game

5:30 p.m.: Here's a look at where some MSU prospects have been mocked leading up to Wednesday's opening night:

- Draftsite.com -- Competitive Balance Round A, Pick No. 37