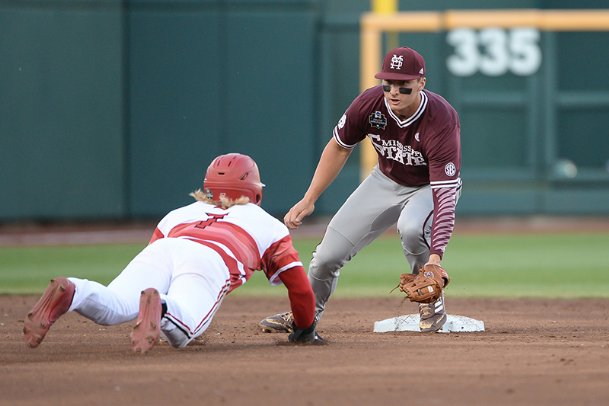 STARKVILLE -- After tying a program record with 11 players selected in the 2019 MLB Draft, the next wave of Mississippi State players will become pros as soon as Wednesday night.

Heading into the COVID-19-shortened 2020 MLB Draft -- down from 40 rounds to five -- a number of current Bulldogs and signees are slated to hear their names called.

With that, here's what to expect from the MSU contingent this week:

At 6-foot-3, 203 pounds, Jordan Westburg looks the part of a professional ballplayer. His movement at shortstop is seamless, while his bat offers a smooth stroke scouts have fallen in love with. The biggest problem? Consistency.

After hitting .294 with 21 doubles and 61 RBIs despite notching multi-hit games just six times over the final 30 regular season games of 2019, an appearance in the Cape Cod League did wonders for Westburg.

In 25 games with the Hyannis Harbor Hawks, he batted .326 with six doubles, four home runs and 14 RBIs after being cut during Team USA tryouts.

Westburg has the tools to be an elite MLB player, but he'll have to find more consistency at the dish.

"Westburg is a little more tools over performance, but he also doesn't have a lot of reps in summer showcase, high-level stuff. He's continued to improve and so there's a lot of teams that are model-driven and see his big metrics in terms of exit velocity, speed, size, raw power, and then see his improving stats. I would say it could be as high as pick No. 20, but it's probably 25-30, 25-35 is where he falls and he seems likely to go and sign."

For what Westburg lacks at the plate, his battery mate Justin Foscue more than makes up for. A three-year impact player in Starkville, Foscue could hear his name called as early as the top-10, though it's more likely he falls toward the middle or end of the first round.

While he doesn't have the athleticism of Westburg in the field, Foscue's bat is one that should translate seamlessly. In 67 games last season, the Alabama native hit .331 with 14 home runs and 60 RBI's.

A high-floor, low-ceiling type prospect, Foscue is the safer of the pair between him and Westburg and that may be reflected on draft night.

"Foscue's got such a strong hit tool projection, and even if the power is an average tool for him at the major league level, that's still the expectation of a really high average, high on-base hitter with 15-20 home runs -- and if he gets to that and he's going to make some all-star teams. The pressure is a little bit more on Foscue's bat, but in that same vein that's also his strongest tool." -- Brian Sakowksi, Perfect Game

JT Ginn is perhaps the biggest question mark of any Bulldog in this year's draft. Having undergone Tommy John surgery before the pandemic ended the 2020 campaign, Ginn's health is an obvious concern.

That said, assuming his arm is on the mend and there haven't been any setbacks, the former Brandon standout is a top-flight talent.

Between his past draft history and a dynamic freshman campaign, it'd be a surprise if Ginn spurned a major pay day again.

"There's a high school kid named Dax Fulton that is also coming off Tommy John (surgery) and (he and Ginn) are getting kind of lumped together. There's also some conventional wisdom that if a kid goes in the middle of the first round, they have Tommy John (surgery), the expectation is 80-85 percent in terms of stuff coming back. Tenth to 15th is where a healthy Fulton and a healthy Ginn would go. They're both in play from (pick No.) 25-40. On talent it's the 25-35 range. So if either of them doesn't go on day one, I would expect them to go in one of the first couple picks on day two." -- Kiley McDaniel, ESPN

Mississippi State fans shouldn't expect to see Austin Hendrick next season. Rated the No. 10 prospect in this year's draft by MLB.com, Hendrick is set to be the first player associated with MSU off the board Wednesday night.

A hard-hitting left-hander from West Allegheny High School, Pennsylvania, he has some swing and miss tendencies that could drop him from the top-10 range to the mid-to-late first round -- though he still profiles as one of the best high school bats in this year's shortened draft.

"I think Hendrick is one of the first two or three (left-handed hitting high school outfielders) off the board. He reminds me of Bryce Harper now...the left-hand hitting right fielder who provides value in the outfield, but whose profile is built mostly around his power. He takes a super violent swing, and he's got maybe the best raw power of the prep class, at least from the left side. That's a guy that's going to hit and hit for power." -- Brian Sakowski, Perfect Game

Blaze Jordan has been on MLB radars for years. After committing to Mississippi State as a 13-year-old eighth-grader, Jordan wowed onlookers with his home run hitting prowess as he belted seven long balls, en route to the MLB High School Home Run Derby.

Having reclassified to be eligible for the 2020 MLB Draft, it's likely Jordan ends up in pro ball next season after finishing his sophomore year at DeSoto Central hitting .440 with 46 RBIs and 10 home runs in just 37 games.

Expect his name to be called somewhere in the middle of Thursday's second round.

"He's got real, real, real juice -- all you've got to do is pull-up YouTube and see that he's got a good chance to hit. I think that he wants to get drafted and somewhere in the second round is probably most likely. He's got some things working in his favor. He's performed really well and he's obviously super young having reclassified." -- Brian Sakowski, Perfect Game

If there's one MSU signee outside of Jordan and Hendrick to be selected this week it's Fristoe. A hard-throwing right hander out of Kentucky, scouts had limited time to see him pitch this spring given the shortened season.

In a normal year, Fristoe is a prospect that could be on the fence about heading to Starkville or turning pro. Given there will only be five rounds in this year's draft, it's a good bet he ends up in the Bulldogs' starting rotation next spring.

"He's also got a big (signing bonus) number. He also is probably going to school. He is polished enough, obviously, -- he's 19 -- and being from Kentucky I don't think he was seen at all this spring. But I think he could be in the weekend rotation, especially given what happened this year. There are some needs in the weekend rotation and this guy is good enough to take that spot." -- Kiley McDaniel, ESPN