'Every place has its own memory': How a cross-country road trip brought Mississippi State offensive line coach Mason Miller and his family together 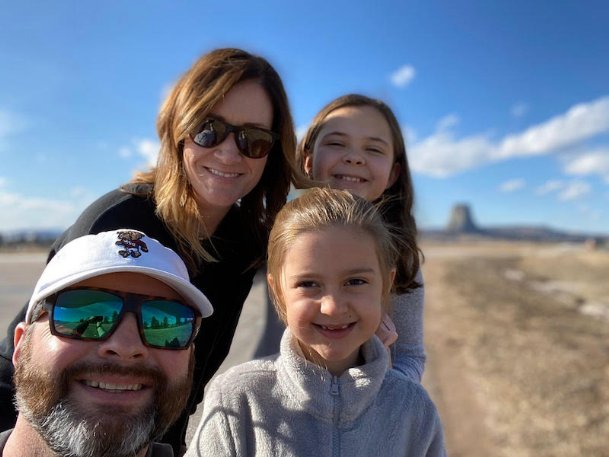 New MSU offensive line coach Mason Miller, his wife Megan and his daughters Mallory and Madison drove from Pullman, Washington, to Starkville in four days in March. By the time they arrived, though, the coronavirus pandemic had already wrought significant changes. When the family went to Mount Rushmore, it was nearly empty. Photo by: Courtesy of Mason Miller

STARKVILLE -- As Mississippi State assistant coach Mason Miller pulled his family's rented GMC Yukon across the Missouri border and into Arkansas, a familiar feeling set in.

Raised in Marietta, Georgia, Miller's winding path through college football took him to Valdosta State where an injury shortened his playing career, but sprung forth his future in coaching. In two decades in the profession he's coached at every level from Division III to Division I; from the PAC-12 and now to the Southeastern Conference.

Making his most recent trip from one job to the next, Miller, his wife, Megan, and daughters Madison, 10, and Mallory, 7, spent four days crossing 12 states as the family moved from Pullman, Washington, to Starkville for Mason's new post coaching the offensive line at MSU.

Working in a profession that is short on family time and persistent in year-to-year movement, the trip and ensuing "shelter at home" order due to the COVID-19 pandemic have offered Miller a chance to spend valuable time with those closest to him.

"It's the first time in my coaching career where I know where things are in my house," he told The Dispatch through a laugh. "Because I actually had to unpack them myself, because I didn't have anything else to do."

Flying would have been the easiest alternative to an over 2,200-mile drive, but Miller quips the family's faithful beagle, Gumbo, forced the National Lampoon-esque endeavor.

Miller wasn't psyched about the idea of Gumbo -- 15 years old -- riding along on a cross-country flight. Instead, the family piled into its rented Yukon on March 8 and began a four-day journey.

Following a one-day drive from Pullman -- where Miller had spent the previous two years coaching at Washington State -- to Bozeman, Montana, the first leg of the family's roadtrip endured with few complications.

Driving from Washington, across the bottleneck of Idaho and into southern Montana, the first three states of the trek had been crossed off the list -- though a restless night's sleep greeted the weary travelers in their hotel room as Miller joked of the banging in the hotel hallway above his own over Twitter.

The second leg the following day brought with it half of Montana, a brief dip into Wyoming and a final stop in Rapid City, South Dakota.

Admittedly intrigued by the history, Miller trotted his family to Little Bighorn -- the site of General George Custer's last stand against the Lakota Sioux, Northern Cheyenne and Arapaho Native Americans in the Great Sioux War of 1876.

A stop at Devils Tower in Crook County, Wyoming, followed. An igneous rock formation in the Bearlodge Ranger District of the Black Hills, the structure was made famous in Steven Spielberg's 1977 film "Close Encounters of the Third Kind."

"I'm a big 'Close Encounters of the Third Kind' guy," Miller said with glee. "I love that movie."

Arriving in Rapid City after a day's worth of sightseeing and over seven hours of driving, the family settled for the night at the WaTiki Indoor Waterpark Resort. Letting the girls run off into the twisting tubes and slides that enveloped the area, Megan and Mason took the time to relax.

In 20 years of coaching, Miller's job has taken his family to eight different schools at varying levels of college football. With that many moves, he and Megan have developed a system. Short on time, Mason heads to the next stop to hit the ground running in his recently acquired post, while also searching for a new home. Back in the previous stop, Megan copes with the decision to leave for a couple days but wholly admits she's raring to go after some time to process -- packing up the house and the girls for their next adventure.

"People always ask, 'Where's your favorite place?' or 'What did you like?'" she told The Dispatch. "Everywhere we've been had a story. It might have been our first job after we got married, or here's where the kids were born, or here's where we met this awesome family. Every place has its own memory."

Heading back to their room at the WaTiki, the Millers were greeted by a gleeful Gumbo and a scattered assortment of snacks. While the Millers enjoyed their time poolside, the family's dog had dug into the candy containers and torn through an entire bag of peanut butter M&Ms.

"I was like 'Oh jeez. How much chocolate is this? Is the dog going to die?'" Megan recounted. "We're driving cross-country because of him, and here he's eaten all this chocolate."

Luckily for Gumbo and the Miller's, the colorfully coated candies had as much peanut butter in them as they did chocolate, leaving the dog without further need of veterinary assistance.

"We were like, 'Here we are,'" Megan said through a chuckle.

Beginning of the end

A die-hard baseball fan, Miller has traded texts with Mississippi State head baseball coach Chris Lemonis since the former was hired in February.

Miller had long anticipated arriving with his family in Starkville to the smoky haze of grills emanating from the Left Field Lounge at Dudy Noble Field as the Bulldogs opened their Southeastern Conference slate against Arkansas on March 13.

His fervor for college baseball grew more rabid as the family spent their third day on the road in Omaha, Nebraska, visiting TD Ameritrade Park -- the annual home of the College World Series.

But listening to the radio broadcast of the Bulldogs' midweek series sweep of then-No. 4 Texas Tech on March 10 and 11, doubt about the future of the college baseball season began to creep in as coronavirus concerns grew larger with each passing day. The NCAA officially canceled the College World Series on March 12.

"We were listening to a lot of talk radio, news radio to pass the time," Megan said. "It was just like 'Woah, things are getting out of control. Things are happening, and stuff's starting to change. I guess it's all worse than we knew from the get-go.'"

As the country began coming to grips with the impending pandemic, the Millers plugged their way through South Dakota, Iowa and Nebraska.

A respite at a nearly-empty Mount Rushmore also left Madison and Mallory puzzled.

"'Why isn't anyone here?" they asked their parents. "We're at all these cool places, and it's just us and a couple other people."

Reminding the girls that they were driving in the middle of the week, Megan quelled their previous concerns as the family continued its trek.

Moving through the fourth and final day of driving, Miller was alerted that the oil levels in the Yukon had reached 10 percent. Calling the rental car company, he was advised to change it himself. Pulling into a Wal-Mart somewhere near Springfield, Missouri, he hopped out, made a quick Google search to figure out the necessary oil, changed it and made one last move toward Starkville.

Spending a final night on the road in Southaven, Mason, Megan, Gumbo and the girls had finally crossed the border into their new home state and the region that Mason and Megan -- a Louisiana native -- had long called home.

"I haven't lived east of the Mississippi (River) in 15 years," Mason said. " But just to be back down here and living here -- it just feels normal."

In the two-plus months since the Millers' cross-country trek, they've spent the days unpacking and organizing their new home in Starkville. Coronavirus restrictions have also granted the family more time together than they're used to during the spring.

In recent weeks, the Millers had a basketball hoop installed. Mallory learned to ride her bike without training wheels. Fishing on the pond down the road from their home has also become a routine outdoor activity for Miller and his daughters.

"This is probably the longest we've ever been together, seeing each other on a daily basis in what, 15 years?" Megan posited.

"Yeah," Mason responded. "We've eaten more meals together in the last two months than we probably have in the last five years."

In the two decades since Miller began coaching, he's never stayed in one spot for more than four years. Now entering his first season at MSU, he hopes the tenure will be long and successful. But should a future job arise under the right circumstances, Megan and the girls will be ready to pack the bags and close on the house as Mason heads off to the next destination before the family is together once more.