Academics come to the forefront as coaches, counselors and athletes enter 'uncharted territory' 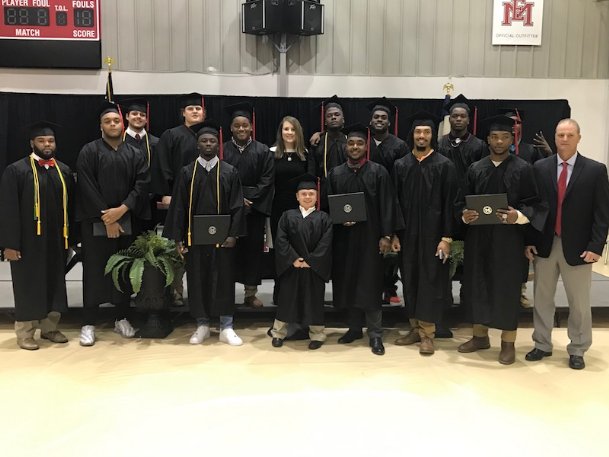 EMCC Athletic Academic Advisor Abby Jenkins poses with the Lions' December graduates, all from the football team. This spring, though, Jenkins didn't get to send off the departing student-athletes, as EMCC held a virtual graduation Wednesday due to the coronavirus pandemic. Photo by: Courtesy of Abby Jenkins

Abby Jenkins had a week off -- at least, as off as a mother of two young boys can be.

Jenkins figured she'd get to return to Scooba on March 16 to help EMCC's student-athletes finish out the rest of the semester. She would get to meet with them, watch the end of the school's baseball and softball seasons and soon watch the Lions' sophomores graduate and move on.

None of that happened the way Jenkins envisioned. When the COVID-19 pandemic hit, the rest of the semester was moved online, and the meticulous Jenkins instantly had to face a completely new reality.

"I'm very planned out and have a very specific plan and strategy every day in a normal situation," she said. "This was more, 'You have to go with the most pressing thing at that moment and move on, and it changes from minute to minute with what's going on and who needs help.'"

That adjustment into what Jenkins called "uncharted territory" this spring has posed new challenges for athletes, academic advisors and coaches at every level of high school and college sports.

At Mississippi State, when the SEC canceled the rest of its spring sports seasons March 17, Assistant Director of Athletic Academic Support Services Sawyer Bowering saw a switch in focus from the Bulldogs' affected student-athletes.

"The kids weren't playing their sports, so academics was kind of the star of the show, so to speak," said Bowering, who serves as the academic advisor for Mississippi State's softball and men's basketball teams.

She said the softball players hold team study halls via Zoom a few times a week, while the men's basketball players typically meet with advisors one on one.

Regardless, though, Bowering said the Bulldogs' athletes have done a good job of "hitting a curveball" in regards to the sudden upheaval of normalcy they've faced.

"I think there are challenges that come with face-to-face classes and playing in the SEC and being in college," Bowering said. "You're always gonna be facing challenges."

Despite lesser resources, athletics departments at the high school level have made steps to help their students -- including student-athletes -- overcome the new challenges the pandemic has posed.

The Columbus Municipal School District placed drive-up WiFi hotspots around its campuses for students to use and passed out learning packets for others. Both those measures, Columbus High School football coach Joshua Pulphus said, helped break down the barriers to education for many of his players.

Pulphus still acknowledged that things aren't the same, saying he misses the "old-school" aspect of education -- eye contact, physical touch and being able to be face to face with players to remind them, "'Hey, you've gotta do your work.'"

"When you're in school, you're able to go in, check on students, visually see them do the work," Pulphus said.

Now, all the coach can see online is whether his students have turned in assignments and, if so, when. Jenkins pointed out that at EMCC, time management issues have become somewhat common among her student-athletes.

"They would say, 'I tried to get on and do my assignment, but it was locked,' and I'm like, 'Well, yeah, because the deadline has passed,'" Jenkins said. "That's just time management. I can't do anything about that."

Despite that, though, Jenkins said her students generally have needed less motivation and have showed more willingness to adapt to their new surroundings, likely because they're less comfortable and don't feel like they can wait until the last minute to do their work.

"Overall, the level of concern for their grades is much higher because I think they do have a level of anxiousness that has made them ask more questions," Jenkins said. "It makes them more in tune than I feel like they normally are in a regular situation in class."

While EMCC typically offers fully online eight-week summer classes for its student-athletes, Jenkins said the school's four-week in-person classes -- worth one semester of course credit -- will become synchronous classes via Zoom and meet at the regular times.

The Lions' football players -- whom the school aims to have graduate by December to be ready for a return to play in Division I or elsewhere -- will begin classes June 1.

Men's and women's basketball players will begin classes in July, and Jenkins said the Lions are all ready to get back to things even if they can't come to campus just yet.

"They're definitely ready," she said. "They're all ready to get back into practicing their sport whether they're gonna be in season or it'll still be their offseason. They're just ready to get in the weight room and get back to a normal routine."

But Bowering said Mississippi State, which has said it expects a return to in-person classes in the fall, is still evaluating plans for a remote fall semester if need be.

"We learned that we can do it, so I don't think that the fall would be much of an adjustment if we have to stay remote," Bowering said.

More likely, she said, is a middle ground where face-to-face instruction resumes, but social distancing practices are put in place.

"I think that's our current challenge: trying to figure out all the logistics of that," Bowering said.

Jenkins, who said she greatly prefers in-person meetings with students to the text and email conversations she's been having, described the remote approach as "impersonal."

She said while the Lions' teachers, coaches and staff got into a groove near the end of the semester, as all six teams had a GPA above 3.00, and the school's combined athletic GPA this school year was 3.25.

But knowing the circumstances were temporary was a big factor in that success, Jenkins said. Should they continue longer, she'll be missing even more of the parts of her job that she cherishes. On Wednesday, for example, the Lions held their virtual graduation as Jenkins missed a chance to send off the school's sophomores in person.

"It was hard knowing that we don't get to say our usual goodbyes," Jenkins said.

Still, though, she's willing to do what it takes -- as long as it takes -- to keep the campus safe.

"But at the same time, everybody's health is the No. 1 concern, and we want to do what's right," Jenkins said.