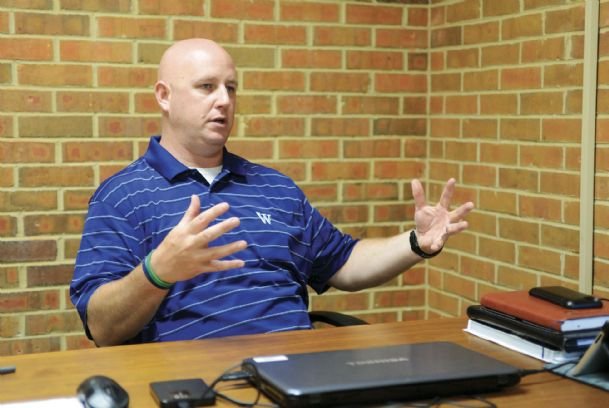 MUW Athletic Director Jason Trufant said he doesn't expect any cuts for athletic programs coming as a result of COVID-19. âIf and when that situation arises, the campus will handle that appropriately," Trufant said. "Itâs definitely not anything I foresee coming in the future.â Photo by: Mary Alice Truitt/Dispatch file photo

Jason Trufant is still trying to figure out what's next.

Two months after the Mississippi University for Women athletic director suspended the Owls' athletics programs indefinitely amid the outbreak of COVID-19, Trufant is still left with more questions than answers.

He's not sure how the virus affects the timeline for The W's planned baseball park, unclear on what financial consequences the virus could inflict on Owls sports down the line.

Even a more immediate occurrence -- this fall semester -- could play out in myriad ways, and Trufant knows it's far too early to commit to just one course of action.

Trufant stressed that the Owls aren't "anywhere near" discontinuing any of their athletic programs, which has been a cost-cutting measure employed by several major schools.

"I think we are doing everything we can do for our campus, and athletics plays a vital role on this campus," Trufant said. "If and when that situation arises, the campus will handle that appropriately. It's definitely not anything I foresee coming in the future."

Trufant noted that The W -- making the transition to Division III -- isn't a "revenue-generating program" and thus isn't at risk of losing out on millions if football and men's basketball don't allow fans to attend games.

"We don't rely on ticket sales and concession sales," Trufant said. "That's not our model. ... Revenue from athletics outside of tuition is not something vital for us."

Money brought in by athletics has decreased in Scooba, but that's not unique to EMCC, and it's not a pressing issue, Thompson said. Like smaller Division I programs and Division II schools, junior college athletic programs simply don't produce that much revenue.

"You don't make a lot of money off of JUCO athletic events anyway," Thompson pointed out.

She said that while EMCC's cabinet meets every day, the school has had no discussions whatsoever about cutting athletics programs because of the pandemic.

"Everybody's just kind of surviving and just trying to keep their head above water," Thompson said.

Should the virus not allow her school to return to in-person instruction this fall, Thompson said, student-athletes will not be able to return to campus, as the National Junior College Athletic Association has said member schools' general populations must be privy to the same resources afforded to athletes.

Trufant said the decision to allow athletes at The W to return to campus in the fall if the rest of the student body cannot is not his to make.

Regarding the school's plan for a new baseball park on campus, Trufant said, a previous timeline of 18 to 24 months to complete the first of three phases may not still hold.

"Obviously, timelines have changed, and they're gonna change, but that's not something that we're just gonna stop providing effort for," Trufant said.

For now, he and his staff will keep adjusting to a "new normal" that changes constantly. It's all they can do, after all.

"I think we have to take this like everybody else is -- one day and one minute at a time -- and be prepared for what's next," Trufant said.