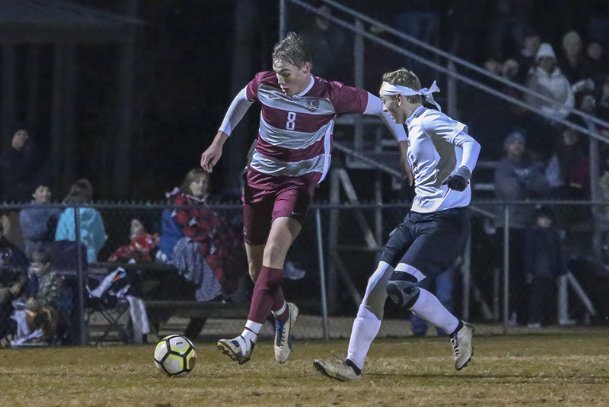 Ben Bradley doesn't even remember the essay he submitted as part of his application to the Mississippi High School Activities Association's Lindy Callahan Scholar-Athletes program.

But he knows it must have been good.

The New Hope high school senior has turned in more than 30 of them by now, with his mother Aimee looking over each one to attest to their quality. And so far, they've all been great -- or, at least, Ben has. He's already earned nearly enough scholarship money to pay for almost four years of college at Ole Miss, and he hopes there's more on the way.

On Tuesday, the high-achieving Trojan -- ranked seventh in his graduating class while playing for the school's soccer team as a central defensive midfielder and the football team as the starting placekicker -- deservedly added another chunk of change to a growing pile.

He was one of 16 seniors around the state named a Lindy Callahan Scholar-Athlete, a distinction that will earn him a $1,500 scholarship. One boy and one girl from each of the state's eight geographical districts were selected for their academic accomplishments as well as their participation in high school sports and other activities. For District 4, that boy was Bradley.

"I'm really honored that I made it that far," he said. "I feel really special that I got it."

With the win, Bradley became only the second New Hope student ever to earn the award since it was started in 1996 to honor longtime Gulfport High School coach and athletic director Lindy Callahan.

The first? Ben's brother Jerrod, who won in 2014. (Plus, both will have attended pharmacy school at Ole Miss once Ben starts the program Oxford this fall.)

Several people have said the family connection was a coincidence, but Ben insisted it was the product of plenty of effort by both of them.

"We both worked really hard for it, and it's awesome that we both got it," he said.

But there's still plenty of competition among the siblings. When Jerrod scored a 30 on his ACT, Ben remembered and was happy to edge him with a 31. And Tuesday, when Ben sent his older brother a screenshot of his name among the honorees, Jerrod had words for his youngest sibling.

"'If only you weren't as ugly, then you would be a spitting image of me,'" Ben recalled Jerrod saying. "That's just him being an older brother."

The two winning Bradleys still form a Rebel alliance against their other two siblings, who are current students at rival Mississippi State. Victoria, who's starting a master's program at Starkville, and Daniel, who will be a junior, often plague Ben and Jerrod with friendly banter about their chosen school. (Victoria applied for the Callahan scholarship in 2016, and Daniel did the same in 2018, but neither won.)

"They always talk about ringing cowbells and stuff," Ben said. "I'm just like, 'I don't want to.' I feel a lot better at Ole Miss. In my opinion, it's way better than Mississippi State. But it's just a matter of opinion."

When the youngest Bradley heads to Oxford, he'll come in with a head start, too. Thanks to dual-credit classes at New Hope, Ben only had to take one class at the high school this spring, and it was only two days a week. He'll head to Ole Miss with 15 credit hours already taken care of, a load off his course schedule and his mind as he prepares for pharmacy school.

To New Hope football coach Wade Tackett, Bradley's insistence on putting academics first made him what the coach called an "ideal" student-athlete.

"Ben is the epitome of 'student-athlete,'" Tackett said. "When you hear that term, Ben Bradley immediately comes to mind."

When Bradley's ACT score came in, the coach recalled, his kicker was excited, happy and willing to talk about it to his coach. That focus on academics over football stuck with Tackett.

"That was at the forefront of his mind," the coach said. "You knew he put an emphasis on it. You knew it mattered to him."

Bradley said when anyone asks how to achieve the success he has seen, he's developed a simple answer: Devote yourself to academics first, because that will keep you eligible to play and let you focus more on athletics.

"'You have to focus on your grades first, and then you worry about your sports,''" Bradley said.

Bradley has even found time this spring and summer for more than that, working the front desk at AlarmPro in Columbus in the spring and taking on a job at the Allegro Family Clinic pharmacy on New Hope Road, walking distance from his school, this summer.

Right now, he's working Mondays, Wednesdays and Fridays at AlarmPro; Tuesdays, Thursdays and Saturdays are devoted to the pharmacy.

"It keeps me busy, but I'm glad that I'm doing it, because I need a lot of experience out of it," Bradley said.

He said his mother's emphasis on community service for all her kids was a big reason why he has been so active in his jobs, academics and sports. To Tackett, Bradley's success reflects well on him, his family, his school and the area as a whole.

"That's a good sign of not only the school culture and environment but also the community of New Hope," Tackett said.

The coach said he and principal Matt Smith both knew straight away who the school's nominee should be for this year's scholarship, and Tackett said he's happy to see hard work continue to pay off for his highly motivated player.