'I'm looking at it as an academic first kind of thing': How former Mississippi State walk-on Logan Burnett is managing the transfer portal during the COVID-19 pandemic 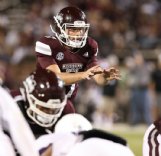 STARKVILLE -- Logan Burnett stood on the pavement outside his suburban Birmingham home and fired a pass down the street. There a neighbor corralled the ball from the one-time Mississippi State walk-on, tight spiral and all.

For weeks, the COVID-19 pandemic has left this scene on repeat as Burnett tosses crossing routes, hitches, slants and a handful of verticals to anyone who's willing as he prepares for his final season of college football.

Inside his home, he's converted his basement into a workout room. Now inhabited with a bench press and a squat rack, Burnett and a handful of friends use the space almost daily to stay in shape.

"He's just doing everything he can do to improvise and make the most of the situation," Brett Burnett, Logan's father, told The Dispatch.

And while Burnett is doing what he can to prepare for a season that still lacks a hard and fast start date due to ongoing coronavirus concerns, he's spent most of his time this offseason battling the college football purgatory better known as the transfer portal in hopes of finding an academic and athletic fit for his final year of eligibility.

"You get a lot of responses, but it's kind of tough to get someone to commit to you right now and tell you to come on just because everything that's going on," Burnett said. "But I'm keeping my fingers crossed that it'll happen here in the next two weeks or so."

While Burnett boasts a perfect completion percentage and an average of three yards per rush over his four years in Starkville, he doesn't pretend his transfer is for playing time.

A career walk-on, he appeared in six games for the Bulldogs -- completing two passes for 36 yards and adding another three yards on one rush. But more than a chance to play, Burnett sees his final year as a college quarterback as an opportunity to learn and further connect with those involved in collegiate athletics as he prepares for a life in sports administration.

Originally entering the transfer portal in early November, NCAA rules mandated he do so in order to visit Texas Christian University during MSU's bye week to complete his MBA admittance presentation and interview and visit with the football program. Once the trek was completed, he finished the season in Starkville -- graduating in just three and a half years with a degree in management.

Following the season, Burnett enrolled at TCU as an MBA student and, again, walked on to the football team. Going through spring with the Horned Frogs, he received more reps than he initially anticipated as a slew of injuries and transfers hit the quarterback room in Fort Worth.

But as the spring semester came to a close and his first set of master's classes neared their end, Burnett felt unfulfilled. Seeking an opportunity more in line with his interest in sports administration and more financially affordable than TCU's $120,000 tuition over three years, he entered the transfer portal once more.

"I had a great experience at TCU football-wise," Burnett said. "I love the coaches. I loved the area -- Fort Worth is a great area. Academically it was awesome -- great professors, great administrators. It was just more the financial thing. Seeing what my long term goals were, I think it was best to switch to the sports administration track and save that money and try to get done a little sooner."

Rather than recruiting rankings or the fan-induced hype that has helped transfer quarterbacks snag headlines in recent years, Burnett's process has been one of cold-calls and pitches.

Calling and emailing advisors, admission officers and anyone who could guide him through the varying entrance processes at his desired schools, he spends hours upon hours on the computer researching the academic legs of each potential destination -- a task he says has proved exceedingly difficult as few school employees are working on-campus due to the coronavirus pandemic.

Burnett has also used his varying resources from MSU and other coaches he knows around the country to try and navigate which schools might be in need of a quarterback this fall, though that's also proven trickier than normal given the cancelation of spring ball.

Unlike most offseasons, the transfer carousel has slowed as position battles that tend to work themselves out in late March and early April never had the chance to progress. Instead, it's left coaches and potential transfers -- like Burnett -- in an ongoing flux as teams look to sort out their rosters.

"There's so much that's up in the air," Brett Burnett said. "And I think that there's a lot of people just kind of in a holding pattern, making decisions on what they're gonna do, who they're gonna bring in etc. So we've tried to just be patient and continue to work hard like you're gonna be somewhere next season."

While Burnett continues to monitor the academic leg of his future football career, it hasn't stopped him from improving his on-field ability.

Though he readily concedes he's not transferring for playing time purposes, he still hopes to have an impact as a scout team quarterback and helping to relay plays from the sidelines.

As Alabama's "shelter in place" ordinances have become more relaxed, Burnett has transitioned from the pavement outside his house, to the practice field at nearby Hoover High School. Corralling his former Bessemer Academy teammates -- the same players he helped lead to an undefeated state championship in 2015 -- and a number of other collegiate talents from the area, it's become a perfect avenue for the one-time Bulldog to catch up with old friends and create new ones.

Among those newer faces in Burnett's football circle is former Alabama walk-on and recent Vanderbilt commit Mac Hereford. Connecting with Burnett through a mutual acquaintance at QB Country -- a quarterback training program based in Alabama -- Hereford was advised to meet up with Burnett down in Destin, Florida as the pair were both slated to be in the area during spring break.

Upon meeting, the pair clicked. Like Burnett, Hereford too had sought a postgraduate business program after his time at Alabama concluded. On the field, he also offered Burnett a reliable target who was willing to show up to work each time out.

Most recently, he was among the receivers to catch passes from Burnett during a pseudo-Pro Day the former Bulldog constructed. Hereford also reached out to a number of coaches he's connected with to make them aware of his new passing partner.

"For someone like Logan, who was just getting started talking to people, it can be a very frustrating process," he said. "....What I've done is basically for any of my friends like Logan or guys who are to find a new spot right now is I've tried to reach out to some schools that I know and just personally ask them or let them know that, I know a quarterback here or there or different position guy just to help them out a little bit."

While the NCAA has pushed back its moratorium on in-person recruiting through June 30, Burnett is hoping to have a final destination chosen in the next couple weeks.

Though he wouldn't disclose the exact schools he's been in talks with of late, he did concede options closer to his home in Pelham, Alabama would be ideal.

And though it's likely Burnett will throw more passes to his neighbors on the pavement in front of his house over the coming weeks than he will his entire senior season, it's the academic side to his next college stop that is as important as the number of live snaps he sees under-center.

"I'm looking at it as an academic first kind of thing," he said. "I'm not going to play at the next level. I'm looking to get a great education, make those great connections in an athletic department, with football coaches and experience (football) for one more season."