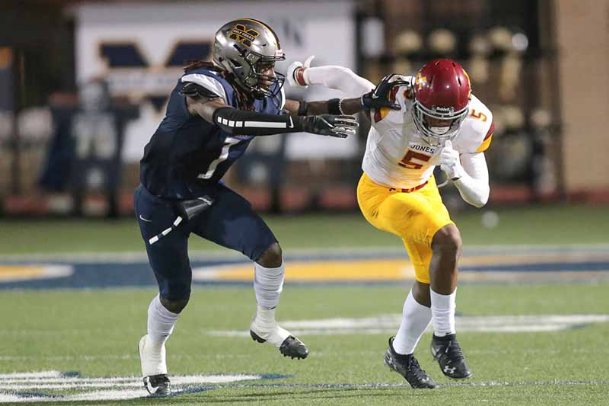 Mississippi State target Jadarrius Perkins, left, has seen a large amount of recruiting interest, picking up 17 offers from schools since March 22. Mississippi State has steadily remained in the mix for his services. Photo by: Photos courtesy of Mississippi Gulf Coast Community College

STARKVILLE -- While the spring football season was marred by the COVID-19 pandemic, recruiting interest in Mississippi Gulf Coast Community College defensive back Jadarrius Perkins has persisted in bulk.

Since March 22, Perkins has picked up 17 offers from schools ranging from Texas A&M, Oregon and Ole Miss to Texas Tech, Louisville and Oklahoma according to 247sports. Mississippi State has also steadily remained in the mix for his services.

And while Perkins told The Dispatch he doesn't have an exact timetable for when he hopes to make a college decision, he'd fit what coach Mike Leach and defensive coordinator Zach Arnett are building in the secondary in Starkville should he pick the Bulldogs.

At 6-foot-2, 190 pounds, Perkins mimics the length and strength of previous MSU commits in the class of 2020 and 2021. MGCCC teammate Cortez Eatmon, who spent his freshman season at Independence Community College in Kansas and committed to MSU earlier this month, stands at 6-foot-3, 190 pounds. Emmanuel Forbes -- the second-highest rated player in MSU's 2020 class -- and Decamerion Richardson stand 6-foot-1, 171 pounds and 6-foot-2, 176 pounds, respectively.

Given his size, Perkins excels in coverage against the exceedingly larger wide receivers that have begun infiltrating the college game. His 4.42 40-yard dash time also offers a glimpse at the elite level speed he possesses.

"He's just a bigger body, bigger shoulders, bigger legs," MGCCC coach Jack Wright said. "He's the type of corner now that all the big time programs want, because at some point they're going to try a big athlete out there and try to get you one-on-one, man (coverage) and he's the type with his body type that really can match up with that."

Beyond the physical attributes, Perkins boasts a confident persona that gives him a certain edge when lined up along the line of scrimmage. As an ode to this mantra, the message "#COCKY" is conveniently nestled at the back end of his Twitter biography.

"That's just saying I'm fearless; I have the confidence that I will dominate anybody that steps in front of me," he explained in a text message Monday. "It's more like a mentality that I feel is something you need to play this position."

Though offseason work and spring ball were slowed or entirely canceled due to the coronavirus, Perkins has continued to put in time honing his craft. As recently as Sunday, he was running through cone drills in which he'd chop his feet, hit a certain spot and swat a tennis ball thrown his way. Upon reaching the final cone, he turned, backpedaled and leaped into the air to catch a football tossed over his shoulder to simulate coverage.

Performing the drill along a set of railroad tracks, Perkins conceded he's had to get creative in where he can work out. Most days he bounces between his front yard and the practice field at Hattiesburg High School -- where he helped the Tigers to a 13-1 record and a second round appearance in the MHSAA 5A Playoffs as a senior in 2018.

Now two years on from that final season, Perkins stands as one of the more sought after junior college defensive backs in the country despite previously being rated a two-star recruit by Rivals out of high school.

As far as MSU is concerned, he told The Dispatch he's heard frequently from the Bulldog coaching staff -- most notably safeties coach Jason Washington and head coach Mike Leach.

That said, whether Perkins ends up in Starkville remains to be seen. Recent offers from Oregon and Texas A&M have caught his attention. Arkansas should also factor into his recruitment as it hits the home stretch.

But wherever Perkins does end up, he'll carry the physical traits of dominant defensive backs before him and a confidence he'll succeed at any level.

"I mean, he knows he's a good player," Wright said. "And I think if you look at the best players at (defensive back), they have a lot of confidence. If they do give up a ball, in their mind, it's because they made a mistake or somebody got lucky, so it's on to the next play. I think he brings that attitude to the secondary that, I think, you've got to have to be successful there."