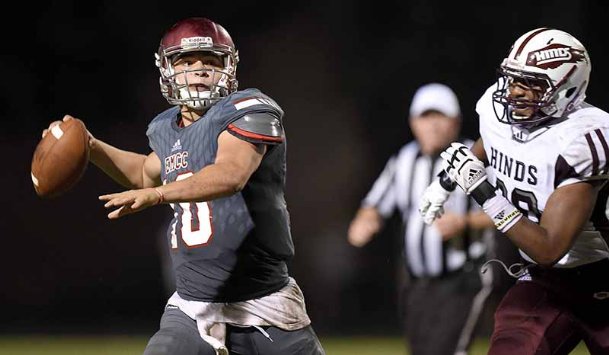 East Mississippi Community College quarterback Connor Neville throws a pass against Hinds Community College on Aug. 29 in Raymond. After an up-and-down season with the Lions, the Washington State transfer is still fighting for a return trip into college footballâs highest echelons. Photo by: Chris Todd/EMCC Athletics

When Connor Neville transferred to East Mississippi Community College before the 2019 football season, he felt like he was standing on holy ground.

Before coming in from Washington State, Neville had watched Netflix's "Last Chance U," which highlighted the EMCC players who came to Scooba to earn another chance to play at college football's highest level.

Neville, a four-star recruit, redshirted in his first year with the Cougars in 2017 and didn't play at all in 2018. Looking for a new place to play, he turned to the school he'd seen produce countless Division I players and even NFL stars like LeGarrette Blount, Jarran Reed and ZaDarius Smith.

"'Wow, this is an amazing opportunity that not many kids get,'" Neville thought when he arrived in Scooba and was handed the keys to the Lions' offense as the team's starting quarterback. He expected to play a key role for a team that hadn't lost since October 2017; to add another national championship to the collection for a school that had won two straight titles and four of the past six; to catch the eyes of coaches at the top echelons of Division I.

EMCC's winning streak was broken in its first game, the Lions finished 6-4 and lost in the first round of the state playoffs, and Neville's recruiting never took off. The quarterback currently holds offers from FCS schools Mississippi Valley State and Morgan State, and he's hoping for more before making a decision.

"I thought I was gonna have a lot more going for me," Neville said. " ... Unfortunately, everything didn't go as planned, but I'm trying to make the most of it."

The quarterback, who finished the season ranked seventh in the nation in passing yards per game but also tied for second in interceptions, also said the Lions' coaches didn't help as much as he anticipated.

Multiple Division I coaches were lined up to talk to Neville after EMCC's Oct. 3 home game against Northwest Mississippi Community College, but when the Lions lost 56-36 to snap a seven-year, 36-game home winning streak, head coach Buddy Stephens ordered the team into the locker room right away, telling Neville he couldn't talk to anyone. The coaches left.

"That doesn't help when you can't talk to a school," Neville said.

Neville said he's well aware of how the recruiting process works and that he feels worse for the players who deserved it more but for whom it didn't pan out.

"A lot of coaches want the big-time superstar guy, and I've always been an underdog," Neville said. "I feel like I can compete with anybody. There's no question about that. It's just who's willing to pull the trigger on me."

Two schools have so far, and Neville said he's familiar with the Morgan State area since his dad grew up in Baltimore before wrestling at West Point and going into the U.S. Army. Despite a few visits to Valley's campus in Itta Bena, though, Neville said he didn't feel much of a connection with the school and wasn't sure how he might fit in.

Coaches from Maryland and East Carolina have checked in with the quarterback, with the Pirates asking him about his GPA, stats and game tape with the Lions. Otherwise, the interest in Neville has been far less than he expected, due in part to a junior-college quarterback market he called "a little weird."

If the fall season, though, gets delayed or even canceled due to the COVID-19 pandemic, Neville isn't necessarily against having more time to find a good fit. As things stand, with schools' summer workouts delayed, the quarterback isn't sure how safe things are with regard to starting the season on time.

"If we can't even have summer workouts, then what's the point of having a season?" Neville said.

The Beaverton, Oregon, native pointed to the cancellation of in-person instruction and fall athletics in the California State University system as a sign that similar things could happen across the rest of the country.

"If a big place like California is affected by that so strongly, I feel like other states will do the same thing," Neville said.

Back in Beaverton since December after receiving his associate's degree from EMCC, Neville has been staying in shape during the pandemic: throwing with his twin brother in the field next to their house; hanging from the pull-up bar or working out on the full weight set in the garage.

He's still waiting, too: waiting for the opportunity he thought -- he still thinks -- EMCC can bring him.

"I have faith that someone will come around and be ready to pick me up," Neville said.