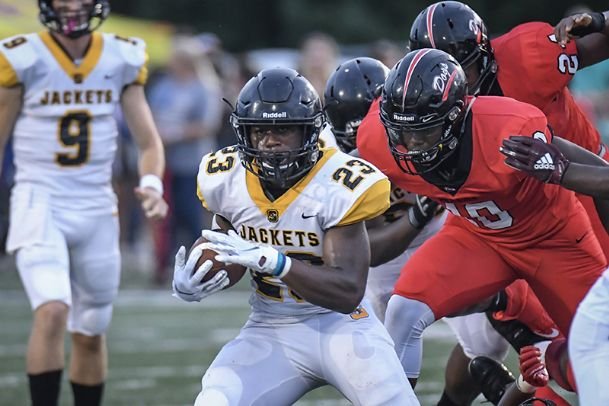 Starkville running back Amariyon Howard finds a hole for a gain against a stingy Brandon defense on Aug. 23. Howard is a MSU commit and will play for the Bulldogs in the fall of 2021. Photo by: Austin Frayser/Dispatch file photo

STARKVILLE -- Amariyon Howard's workouts amidst the COVID-19 crisis have come out of sight.

Racing up and down a hill tucked in and around the Thad Cochran Research, Technology and Economic Development Park just minutes off Mississippi State's campus, Howard runs up and down the hill five to six times per week.

Regularly joined by his father, Marcus Sherman, and cousin Jerry Johnson -- a former Ole Miss defensive back -- the trio bets push-ups before each trek up the hill, with the loser having a certain number to endure after the spring. And while the challenge has been stiff, Howard remains steadfast that he's won the majority of the sprints up the nearly vertical slope.

"I've been winning so far," he said through a laugh. "I can't get arrogant. We'll see what we're working with today."

While his workout routine has been modified since the closure of Starkville High School in early March due to the coronavirus pandemic, Howard has remained persistent in his own pursuits ahead of his senior season -- if and when that may come.

Committing to MSU on Dec. 6, the stocky running back is set to improve upon an already impressive junior season in which he trudged for 833 yards and six touchdowns on 140 carries, while adding another 18 receptions for 205 yards and two scores.

"I think football you have to be able to change and play to your strengths," Starkville coach Chris Jones told The Dispatch. "Last year our receivers were our strength, but this year we'll have to rely on Amariyon because he's going to be our strength...We plan to put a lot on his shoulders and I think he's ready for it."

On the recruiting front, Howard's star has remained relatively dim despite a prolific junior season. He currently boasts just three offers -- Mississippi State, Louisiana-Monroe and Southern Mississippi -- and is rated the No. 1,019 recruit in the country according to 247 composite.

With the spring washed out due to COVID-19 concerns, Howard also missed a prime opportunity to boost his national profile at camps and prospect showcases a normal offseason would afford.

"I think spring would have been really, really good for him," Jones said. "He would have had a chance to impress a lot of people who haven't seen him. He's still kind of under the radar as a running back but I think he's the best running back in the state."

And though Howard's profile has stayed under wraps, he's taken the past few months to develop a rapport with Mike Leach's coaching staff after previously pledging to the ousted Joe Moorhead. Howard told The Dispatch he hears from running backs coach Eric Mele almost every day. He also receives postcards and graphics from MSU regularly.

"I like the new staff," Howard said. "We've had Zoom meetings and FaceTimes where we got to talk to them and it was pretty cool to be able to talk to them over (video chat). They're cool so I should be able to get in well with them."

Beyond the daily interactions with the Bulldogs' staff, the coaching change has Howard bound for an offense that fits what he's done for three seasons at Starkville. A functional cog in a Yellow Jacket offense that saw its quarterbacks combine for 450 passing attempts a season ago, the air raid concepts that have led Leach to 193 career wins are reflected in Jones' offense just 2.2 miles down Highway 12 from Davis Wade Stadium.

"We take advantage of the running back in the flat, or a wheel route, or throwing screens and that kind of stuff," Jones said. "But I think he'll adjust easily just because it's already something he does and he'll be comfortable doing it and he's only going to get better the more he does it. I think that's going to help add to his total package as a running back."

And while Howard remains a year away from his first collegiate contest in the maroon and white, the immediate future will be filled with his training sessions alongside Johnson and his father, where even in defeat, he's adding to his already impressive frame.

"We do a lot of work," Howard said. "We're always pushing each other."