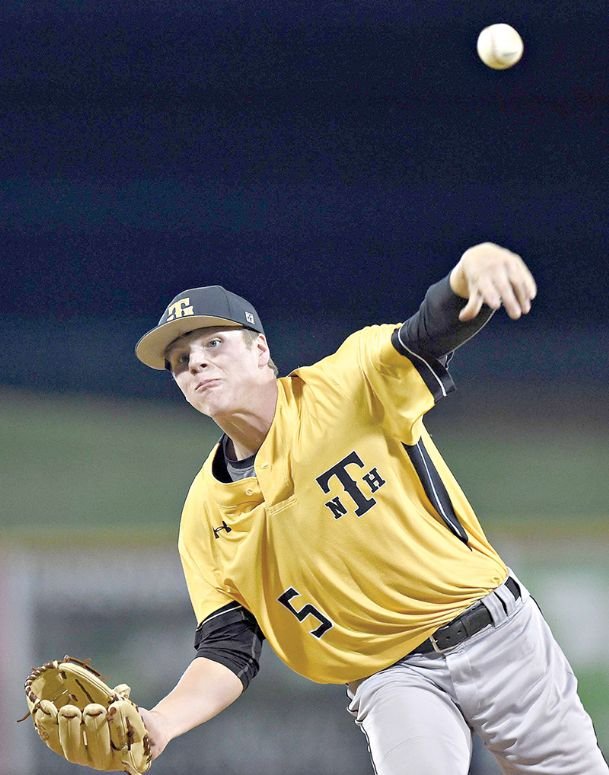 Stallone Shelton, a senior starter at catcher for the New Hope High School baseball team this spring, is dying for a chance to play college baseball. He's even willing to wait a year and play anywhere on the diamond to achieve that goal.

But the opportunity hasn't come around yet for him.

With the COVID-19 pandemic raging and just a few months remaining until the start of classes this fall, Shelton knows he may not have many chances left to impress college coaches.

It's why he signed up for the Cotton States Baseball League, a wood bat summer league for high school graduates and current college players held at BNA Park in New Albany.

"It may be my last opportunity to showcase my talent, and hopefully I can do really well when we start to play," Shelton said.

That start is currently slated for June 5 -- pending the relaxing of state policies currently limiting outdoor gatherings to 20 or fewer people -- as Shelton readies to take the field with a veritable All-Star team from the Golden Triangle.

Eleven of the 18 players comprising the Hill Country Generals, one of the CSBL's eight teams, hail from the area, including Shelton's senior teammates Ryan Burt and Presley Hall.

Shelton, though, is the only uncommitted player on the Generals' roster, as Burt has signed with Pearl River Community College and Hall will play for Southwest Mississippi CC.

With Division I coaches promising to watch Shelton play and major league scouts likely to drop by to check out the league, Generals coach Jeffrey Cook said the CSBL is a way for Shelton and players like him to earn the attention they haven't yet been able to.

"That's one of my main goals this summer: helping Stallone find a place," said Cook, who resigned his job as Columbus High School's baseball coach in 2014 to take a job as an assistant football coach at South Pontotoc. "He will. He's a quality player from a quality program, and he's a high-quality kid. He'll get an opportunity. There will be somewhere for him to play."

Cook said Shelton has been caught up in the "numbers game" affecting community colleges across the country after the National Junior College Athletic Association will allow spring-sports athletes to take an extra year of eligibility. That has kept rosters full and limited teams in the amount of incoming freshmen they could take on.

Consequently, Shelton and the 12 other uncommitted players knows getting a chance to prove themselves this summer could "make or break" whether their baseball careers will be able to continue.

"I think that I can do it, and I just have to hopefully show that I can," Shelton said. "Hopefully I have a good summer."

Since Shelton was in kindergarten, he's known Cook, even getting the chance to play under the coach in the CSBL's high school fall league in 2019. There, Cook said, Shelton -- buried in New Hope's rotation behind the likes of Burt, Payton Springfield and Rye McGlothin -- actually showed the most promise as a pitcher.

This summer, the competition level increases as Shelton and the Generals face players from the likes of the University of Memphis, Louisiana Tech, Middle Tennessee, Arkansas State, Saint Louis and Northern Kentucky.

"It'll be really good for a lot of us, being able to see people we'll be playing against at other colleges and getting back into the routine of playing," said Caledonia senior Tony Brooks, a teammate of Shelton's in the fall league and an East Mississippi Community College commit.

The CSBL's reach will be wide this spring, citing the addition of Macalester College outfielder Finn Snyder, who will come to north Mississippi from his hometown of Bozeman, Montana.

The cancellations of prominent summer leagues, including the Cape Cod Baseball League, mean the CSBL can reap the benefits.

"There's more depth than we've ever had in the league because of the other cancellations around the nation," Cook said.

The league, which has scheduled each team to play 23 games from June 5 to Aug. 2, has increased its number of teams from six to eight and still has 30 players without a spot locked in, Cook said. (Once more pitchers sign up, a new team can be formed.)

Heritage Academy product Brandon Jones, now playing at the Mississippi University for Women, is in that situation, but other Golden Triangle products can be found on rosters across the league.

Oak Hill Academy product Heath Ford, now playing with Jones at The W, will be part of the Rascals. Fellow Owl Logan Suggs, a Caledonia product, is on the Xplorers.

Teammates at New Hope and Itawamba CC, Jonathan Whittington and Tyler Murphy will team up again with the Thunder. Caledonia center fielder and Itawamba signee Thomas Henry Tucker will play for the Tribe, and West Point utility man Baker Watson will rep the Mudcats.

But combined, the Generals' roster dwarfs the seven other teams in local talent. With players able to request teammates prior to Monday's league draft, the three New Hope products are rivaled by Berry, Pearl River signee Banks Hyde and EMCC signee Seth Harris from Heritage Academy.

"I grew up playing with them and know what all they can do," said Brooks, who joins former Caledonia standouts Beau Bates (EMCC) and Cade Stacy (Meridian CC) on the team.

"It just kind of worked out that way," the coach said. "It doesn't work out that way every year."

Cook and his team are raring to get going three weeks from Friday, but the coach said a timely start won't happen if Gov. Tate Reeves doesn't announce an increase to the number of people who are legally permitted to gather outside in one location in the state. Currently, that number is 20, but Cook said he expects Reeves will push it to 50 or more by June 1 -- a critical component to ensure the league will go on as planned.

Cook said the risks of playing in a pandemic are fairly low for his sport, saying he would feel safe if his son Jackson, a junior at South Pontotoc, were playing.

"You don't hear of very many young people that have contracted the disease," Cook said. "Baseball, you're kind of close, but we're still baseball. You are able to really distance yourself. You're not like basketball where you're all over folks and all the time around."

Cook knows what not having a summer season could mean for Shelton and players in the same boat -- especially after they missed out on most of their senior high school seasons. He knows the league's coaches and players alike are ready to get going as soon as they safely can.

"We'll be excited about getting back to baseball, no doubt," Cook said.