A look ahead at Mississippi State softball's crowded 2021 roster 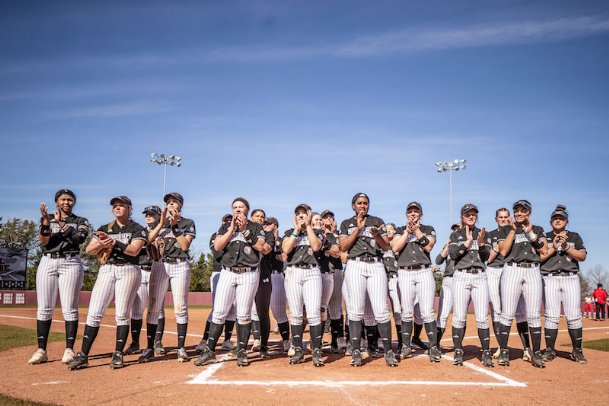 The Mississippi State softball team celebrates after its win against Southeast Missouri State on March 8 at the Snowman (Alex Wilcox Memorial) Tournament at Nusz Park. With four of five seniors returning next year, the Bulldogs' 2021 roster portends to be crowded but full of talent. Photo by: Gabby Zgunda/MSU Athletics

After the best start in school history, the Mississippi State softball team experienced an abrupt and disappointing end to its 2020 season.

The Bulldogs went 25-3, earned a win at the NFCA Leadoff Classic and were poised to start Southeastern Conference play with a home series against Kentucky. But one day before the Wildcats came to Nusz Park, Mississippi State's season was halted, and the Women's College World Series was canceled. Five days later, the Bulldogs' promising year under first-time head coach Samantha Ricketts was officially over.

Williams, who chose not to take an extra year of eligibility, will be the only piece not returning next season as the Bulldogs essentially get to reset in 2021.

Ricketts told The Dispatch that while the Bulldogs remain disappointed about what could have been, the chance to return all that talent is a rare "redo," and the team is ready to reap the benefits. The coach summed up her team's mentality: "'Hey, what an awesome opportunity that we can take advantage of.'"

Let's take a look at Mississippi State's likely 2021 roster -- broken down by position -- as the Bulldogs hope for a repeat of the magic they captured this spring.

Mississippi State's only departure to date comes on the infield, as Williams will pursue a career in civil engineering right away rather than come back next season.

But the Bulldogs return plenty of hitting and fielding talent for 2021.

Davidson and Leilua, who led the SEC with 48 home runs in 2019, had 16 combined long balls in 2020 before the season was suspended. Davidson hit .330 and Leilua .384, and the two players made as formidable a one-two punch as the conference has. They'll almost certainly start at catcher and first base respectively in 2021 and should reprise their roles as the team's No. 2 and No. 3 hitters as well.

Davidson's sister Montana, who was also a junior this season, started 27 of Mississippi State's 28 games at third base in 2020, but she struggled to a .228 batting average. As of now, Montana Davidson should still have the inside track to a starting job, but several Bulldogs who didn't play as much this spring could change that.

Freshman Paige Cook came off the bench 10 times, hitting 4 for 6 despite limited playing time; sophomore Jackie McKenna, who led the team in batting average in mostly pinch-hit appearances and showed off her arm at catcher, is also listed as a third baseman.

Incoming freshman Taylor Middlebrook, a defensive whiz at Alexander High School in Douglasville, Georgia, could see her glove propel her into a starting spot at third.

Middlebrook could play shortstop or second base as well, but two slightly more established Bulldogs seem likely to start in the middle infield in 2021.

Madisyn Kennedy held down the starting shortstop job all season, showing off her slick fielding and hitting .333 with six extra-base hits to boot; Aquana Brownlee, who played in 15 games with seven starts, seems to be the natural successor to Williams at second base.

Incoming College of San Mateo transfer Shea Moreno has the ability to fill in at catcher or in the infield, and shortstop Desiree Lewis redshirted this spring but could also see playing time in 2021.

With all three starters poised to return, what was a solid if not spectacular outfield in 2020 should remain the same for Mississippi State in 2021 in the Bulldogs' least complicated position group.

Senior Candace Denis, who announced April 27 she'll return for another year, started all 28 games and hit .295 while tying for the team lead with eight doubles. Denis, who doubles as a pitcher when the Bulldogs need her, allowed one run in three solid innings in the circle.

Behind that quartet, a group of young players will compete for playing time in the outfield.

Freshman Brylie St. Clair, who hit .417 in 22 games in 2020 while starting just once, will hope to earn a regular spot in the lineup. So will Kiki Edwards (six at-bats) and Celeste Soliz (one), who played sparingly as freshmen.

Junior Carter Spexarth, who is listed as an outfielder but slotted into the lineup at designated player in all 18 of her starts this season, was behind only Leilua in batting average among the Bulldogs' regular starters and should have no trouble starting at the position again.

While Mississippi State's lineup was more than competitive in nonconference play in 2020, it was pitching that helped the Bulldogs to the success they enjoyed this spring.

And if several of the team's pitchers can repeat the career years they had, that success can be replicated.

Under first-year pitching coach Josh Johnson, sophomore Emily Williams posted an ERA of 0.46, and junior Annie Willis had an 0.80 mark. Williams started four games and earned saves in five, while Willis -- a transfer from Troy -- went 9-1 in seven starts.

If the two can excel again next season, the Bulldogs' pitching staff, which had the fourth-best ERA in the nation this spring, could keep up its success in 2021.

But that will take solid performances from the rest of Mississippi State's pitchers, too.

Grace Fagan didn't have quite the sophomore season she wanted, but she pitched to a respectable 2.41 ERA in a team-leading nine starts.

Senior Alyssa Loza, who will be returning next season, was effective in her swingman role, and freshmen Kenley Hawk and Aspen Wesley did well in mostly midweek appearances.

Incoming freshmen Kylie Taylor and Addison Purvis also have the potential to make significant contributions right away for the Bulldogs. Both hitting stars at their respective high schools, the pair put up big numbers in the circle, too. Should they get chances to play on a crowded roster in 2021, they can help Mississippi State's pitching staff keep up the good work.