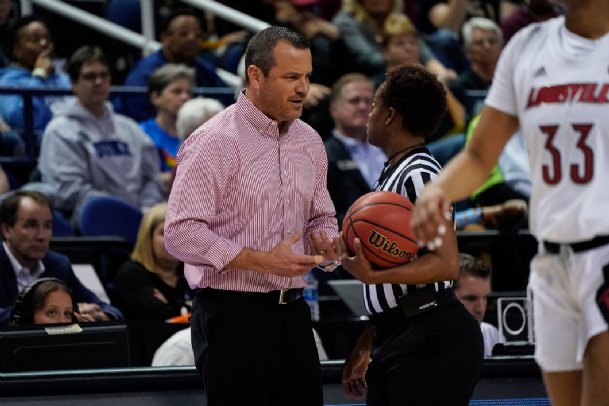 Louisville Cardinals head coach Jeff Walz talks a call over with the official during the first half against the Florida State Seminoles at Greensboro Coliseum on March 7. Walz is one of two finalists for the MSU job. Photo by: Jim Dedmon/USA TODAY Sports

STARKVILLE -- Mississippi State is nearing the end of its women's basketball coaching search.

A source with immediate knowledge of the situation told The Dispatch Thursday that MSU Athletic Director John Cohen is down to a final two of Louisville's Jeff Walz and Old Dominion's Nikki McCray-Penson.

Johnnie Harris, who served as former coach Vic Schaefer's associate head coach for the entirety of his stay in Starkville, also interviewed for the job earlier this week.

A final decision could be made as early as Thursday as both Walz and McCray-Penson reportedly want the job.

It remains to be seen what either would be paid should they take the job.

A source told The Dispatch last week that Schaefer was slated to make almost $2 million annually should he have stayed at MSU. For context, Walz made $1.475 million in base salary during the 2018-19 season according to the Louisville Courier-Journal, while McCray-Penson earned a base salary of $200,000 in 2018-19 according to the Richmond Times-Dispatch.

If hired, both coaches would bring impressive resumes to MSU.

Walz would leave Louisville as the winningest coach in school history as he guided the program to two national title games, three Final Fours, two Elite Eights and four Sweet Sixteens. Under his watch, the Cardinals made the NCAA tournament in 11 of his 12 seasons and won the Atlantic Coast Conference regular season championship in 2018 and 2019.

Before Louisville, Walz spent eight years as an assistant for Brenda Frese at Maryland along with prior stops at Western Kentucky, Nebraska and Minnesota.

As for McCray-Penson, she played professionally for 11 years -- earning three WNBA All-Star nods and two Olympic medals -- following a standout career under Pat Summitt at Tennessee.

Her first coaching gig also came as an assistant at Western Kentucky between 2006 and 2008, where she helped the Hilltoppers to the 2008 Sun Belt Tournament championship and an appearance in the NCAA tournament.

McCray-Penson was then hired as an assistant for Dawn Staley at South Carolina. During her 10-year tenure in Columbia, the Gamecocks won four SEC regular season titles, three conference tournament championships and the 2017 national title.

McCray-Penson then parlayed her time under Staley into the head coaching job at Old Dominion where she's recorded a 53-40 record in three seasons at the helm -- including 20-win campaigns in both 2019 and 2020.

Should neither Walz or McCray-Penson take the job, a contingency plan is in place, but decision-makers are confident a deal will be reached with one of the two candidates in the coming days.

3. Despite starting workouts a month behind other schools, Columbus High plans to keep it simple HIGH SCHOOL SPORTS