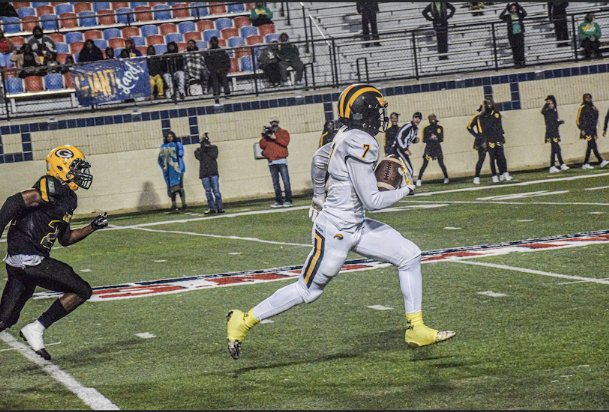 Shazz Preston (right) breaks into the open field in a game for St. James High School. Preston is the No. 38-ranked player in the 2022 class according to 247sports. Photo by: Courtesy of Shawn Preston Sr.

In the thick of overtime in the under-15, 7-on-7 national championship game, Preston raced down the seam, past a defender and across the goal line.

Nearing the back edge of the end zone, he tracked a 40-yard pass from quarterback Eli Holstein, tapped his feet and secured the ball for a national-title winning score.

"It was toe drag swag," Ernest Harvey Jr., Preston's trainer and former 7-on-7 coach told The Dispatch. "It was over the defense in the back of the end zone. It was a controversial call -- he had to get his feet in, catch the ball falling down. Big throw. Big catch."

Just a glimpse at the speed and athletic ability Preston has flashed as a sophomore in high school, it's plays such as these that earned him the No. 1 prospect ranking in the state of Louisiana for the 2022 class last week. And while his football aspirations remain in their infancy, it's those around him that have afforded him the opportunity to thrive at the next level.

"It was a blessing," Preston said of being named the top player in Louisiana in his grade. "And that opened my eyes that I can make something out of this and that I can go far in this sport that I'm doing."

At 5-foot-11, 178 pounds, Preston is far from the largest receiver in his age group. But there's a headinness to his game. His 4.6-second 40-yard dash speed also helps.

Playing under the guidance of head coach Robert Valdez -- a former teammate of Preston's father, Shawn Sr., at Southern University in Baton Rouge -- he notched 1,018 yards and nine touchdowns as he helped guide St. James High School to a Louisiana class 3A state title last fall -- including a 12-catch, 185-yard, one-touchdown game in the state semifinals against Union Parish on Dec. 6.

As impressive, Preston's 63 receptions last year came in a run-first scheme that saw just 249 passes thrown over 15 games. Despite that, he recorded a catch on one out of every four throws the Wildcats attempted.

"The bigger the games, the bigger the stage, he comes up to it," Valdez told The Dispatch. "He does such a great job for us in big games and he's just scratching the surface, to be honest with you."

Beyond his work at St. James, Preston has spent the better part of two years playing with the Louisiana Bootleggers 7-on-7 team -- a squad that further intertwines his deep football family roots.

After starting the organization in 2009, founder Jimmy D. Smith added an under-15 team to the program's ranks in the spring of 2018. Seeking a coach for the squad, Smith turned to Shawn Sr. for the role.

Smith's familiarity with the eldest Preston dated back years. Shawn Jr. -- now a redshirt sophomore safety at Mississippi State -- played with the Bootleggers during his high school days. Shawn Sr. also spent 14 years in the school system as a coach prior to his current administrative post.

"When you meet a parent like them you kind of gravitate toward them and stick to them and they become part of your circle," Smith said. "That's kind of what happened with the Preston's and they're just really great people -- solid people all the way around and the kind of people you want to have in your corner."

"There's an old saying that 'Iron sharpens iron,' and I think with Shazz having an older brother that went through this process, he kind of knows that you're not just competing with the talent at your high school," Shawn Sr. told The Dispatch. "I think 7-on-7, the way the Bootlegger organization is structured, it brings the top of the top in the state together."

Now out of school and home with family due to the outbreak of COVID-19, Shazz and Shawn Jr. have also taken the extra time to work out together -- further pushing the younger Preston on the field.

Returning home from a morning workout with the Preston boys last week, Harvey Jr. said there's a consistent competitiveness between the siblings. Shawn Sr. added the fire between his sons has always been there.

"It's your typical big brother-little brother relationship," he said. "They're probably going to be around each other so long and then a couple hours later they're looking for each other."

Still three seasons away from making his collegiate debut, Preston said last week he has no commitment timetable -- though that hasn't slowed the hype train.

Since being named the No. 1 player in the Pelican State, he picked up offers from Memphis, Georgia, Oregon, Louisville and Florida State all in a four-day span. Home state school LSU remains solidly in the mix. So too does MSU.

After being offered by former coach Joe Moorhead's regime, the Bulldogs' new staff has remained heavily involved in Preston's recruitment. A wide-open Mike Leach offense has its appeals. As does Preston's familiarity with Starkville -- a place he's visited ample times to see his brother don the maroon and white.

And while there's no rush to commit in the immediate future, those around Preston expect MSU to remain in the sweepstakes for the high-flying pass catcher down the stretch.

"I would say because of his brother being there, because of the relationship we have with some of the recruiting staff I would think that, yes, they will be in the mix," Shawn Sr. said.

In the meantime, Preston is focused on continuing to climb the national recruiting ranks. At present, he's rated the seventh-best receiver in his class according to 247sports. If Preston has his way, he'll be No. 1 when all is said and done.

"My response to him was 'You've got six people in front of you,'" Harvey Jr. said. "And all he did was say 'Alright coach,' because he understands the expectation."