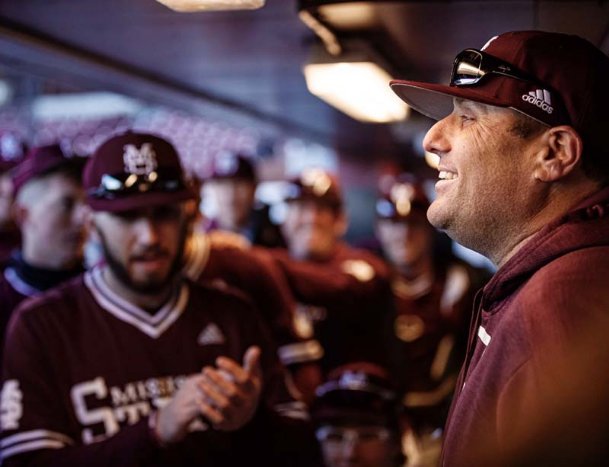 Mississippi State baseball coach Chris Lemonis addresses his team after a college baseball game earlier this season. The 2020 season ended early for the Bulldogs due to the outbreak of COVID-19. If the NCAA extends eligibility for all spring athletes, Lemonis and company will face a roster crunch in 2021. Photo by: MSU athletics

STARKVILLE -- While the Mississippi State baseball season has come to a sudden halt due to the outbreak of COVID-19, coach Chris Lemonis may have his toughest battle yet to come -- a duel with the 2021 roster.

At present, the NCAA is in discussions to potentially extend an extra year of eligibility to players whose seasons were lost due to the coronavirus pandemic. Division II players have already been awarded an extra year. Division I is expected to be next.

And while the idea offers a logical solution to this season's cancelation, the present and future implications on recruits remain a potential snag.

"If we end up with loaded rosters, that's going to be an issue," Lemonis said of a lack of available playing time for incoming prospects. "We haven't spoken about it yet just because we don't know what's going to happen. I don't want to get the cart ahead of the horse, but I think as time goes on that's a possibility and unfortunately, in this day and time, everybody is dealing with (it). It's affecting us negatively in a lot of ways. There's going to be issues."

As it stands, the Bulldogs have currently inked a 14-player class for next season, according to Perfect Game. And while it figures to lose a handful of newcomers to the MLB draft, MSU's roster already boasts 36 players on it.

Beyond the obvious scholarship limitations college baseball already endures, a roster of as many as 50 players leaves playing time sparsely available.

Despite that, MSU recruits have remained rather optimistic about the situation. Wallace State Community College (Alabama) pitcher Drew Talley -- who spent his freshman season at Memphis -- is confident the situation will breed a competitive edge amongst next year's squad.

"I've honestly had no reaction to it yet or what it's going to be like or how everything is going to work," Puckett conceded. "I'm kind of just waiting for everything to set in stone and see how everything goes with that."

Beyond MSU's longer-standing commits, the potential for limited playing time has not stopped the Bulldogs from adding to their class. The latest addition, redshirt sophomore outfielder Brayland Skinner, committed to Lemonis and his staff after three seasons at Northwest Mississippi Community College in Senatobia on March 17.

And while the Bulldogs' future roster construction was a valid concern, Skinner said MSU felt right regardless.

"Mississippi State was the school the whole way," he told The Dispatch. "I think if you look at it as a way to compete I feel like you can only make yourself get better."

As of Monday, the NCAA has yet to reach a decision on extra eligibility. Lemonis said he believed decision makers were meeting March 30 to come to a consensus. And while ample question marks remain about who will even be in the fold come next spring, MSU recruits have largely remained upbeat about the potential for loaded rosters.

"We've just never been here and I think that's the really hard part for us -- for everybody," Lemonis said. "And then we don't know what's going to happen in the future. There's so many question marks. We're hoping the NCAA takes care of the student-athlete -- that's the biggest thing. (It) has to figure out what's best for student athletes and everything that's out there."