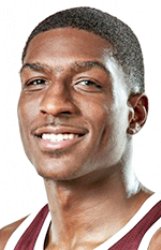 It marks back-to-back seasons where the Bulldogs have had an NABC All-District first-team pick, as Quinndary Weatherspoon was a first-team selection last season.

Perry, a Karl Malone Award top 5 finalist given to the nation's top power forward by the Naismith Basketball Hall of Fame, has already been named consensus All-SEC First Team in addition to United States Basketball Writers Association (USBWA) All-District accolades. He claimed SEC Co-Player of the Year by the Associated Press and was the Bailey Howell Trophy recipient awarded to the state of Mississippi's top collegiate player.

Perry is the only SEC player to rank among the league's top 10 in points (17.4 -- 6th), rebounds (10.1 -- 1st), field goal percentage (50.0 -- 4th) and blocks (1.2 -- 9th). The sophomore was the eighth SEC player over the last decade to average a season double-double. The last MSU players to post season double-double averages were Jarvis Varnado (2009-10) and Arnett Moultrie (2011-12). Among those on the SEC's list are NBA standouts Anthony Davis and Julius Randle from Kentucky along with LSU's Ben Simmons.

Perry became the 17th player overall and seventh player to amass 500-plus points during their sophomore season or earlier in program history. He racked up all 11 of his 20-plus point performances where the Bulldogs posted a 9-2 record since the Kent State game on 12/30. Perry's 10 outings of 20-plus points against SEC opponents were second on the conference leaderboard.

Perry's 26 career double-doubles were tops among SEC active players, and the most by a MSU player during their freshman and sophomore seasons since 1972-73 when freshmen become eligible to play college basketball.

Mississippi State won 11 of its last 15 SEC games to earn a top 4 finish in the conference standings, the program's highest overall finish since 2010-11. The Bulldogs have tucked away three consecutive 20-plus win seasons under Ben Howland for the fifth time in program history, and the first time dating back to the 2007-08, 2008-09 and 2009-10 seasons. The 68 victories are the fourth-highest total in program history for a three-year span.