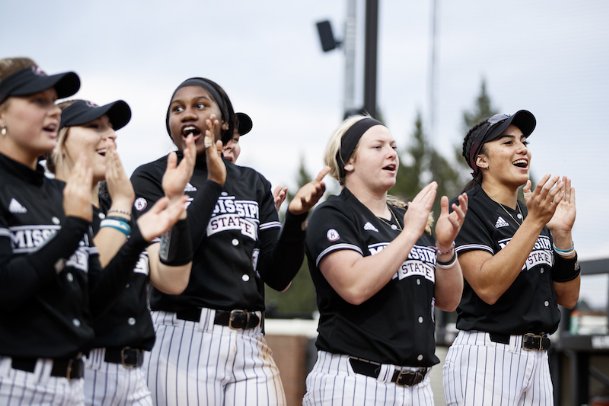 The Mississippi State softball team celebrates its win over UT Martin on March 1 at Nusz Park in Starkville. The Bulldogs won their last 14 games and held a record of 25-3 before their season was officially canceled last Tuesday. Photo by: Austin Perryman/MSU Athletics

The news broke before Samantha Ricketts could break it.

As the Mississippi State softball coach took a phone call from her car, she watched the Bulldogs' players spill onto the field at Nusz Park in Starkville for the meeting Ricketts had called to order. It was around noon on March 12, and Ricketts had just been told that the Southeastern Conference had suspended play until March 30 due to the spread of COVID-19, the disease caused by the novel coronavirus.

Ricketts was ready to give her team the bad news, but it came out on social media first. The coach watched through her car window as outfielder Candace Denis stared at her phone, realizing her senior season had been put on hold. As Ricketts sat there, Denis lowered her head onto a teammate's shoulder and started to cry.

"There's just a lot of low moments like that where I remember just kind of slowly starting to learn how big this was and how serious it was and what the impact was gonna be on our season," Ricketts told The Dispatch on Monday.

In her first year as head coach, Mississippi State had rocketed to a 25-3 start, but by the end of the Bulldogs' practice that day, their chance at the postseason was gone as the NCAA canceled all remaining winter and spring championships, including the Women's College World Series. Five days later, the SEC made one final announcement: The 2019-20 season was over.

The Bulldogs had gotten back from Hattiesburg late Wednesday night after a road game at Southern Miss, so Ricketts scheduled practice later Thursday, wanting to get her players a little more rest.

Mississippi State won the contest 7-2, and immediately afterward, Ricketts turned to find director of softball operations Kayla Winkfield right in front of her, waiting with news.

Winkfield told her head coach there had been a positive test for COVID-19 in Forrest County, home to Hattiesburg. It was the first confirmed case of the disease in Mississippi.

So Ricketts and her team skipped out on signing autographs and taking pictures with the kids who bunched up along the first- and third-base lines at the Southern Miss Softball Complex. The Bulldogs bid their cheering section goodbye and boarded the bus home.

"We had a lot of fans there," Ricketts noted. "It was a great crowd."

The next morning, just one day before the Mississippi State men's basketball team was set to play, the SEC tournament in Nashville, Tennessee, was canceled. An hour later, Ricketts got a call from Athletic Director John Cohen: Softball and all other sports had been put on hold for nearly three weeks.

That afternoon, the Bulldogs had what Ricketts called a great practice -- despite the events of the day.

But with about half an hour left in practice, Ricketts got the news that the NCAA had canceled its championships. Even if the Bulldogs resumed their season, they wouldn't be playing for anything.

"Just kind of knowing that and watching them out there having fun and working hard and enjoying each other and the sport was tough," Ricketts said.

Ten days after the practice at the end of the world, only three of Ricketts' players are still on campus. Senior first baseman Fa Leilua, senior pitcher Alyssa Loza and sophomore outfielder Chloe Malau'ulu -- all natives of California -- remain in Starkville, as their families advised against going home. The rest of the roster went back not long after the decision.

Ricketts said for now the team's biggest priority is making sure her players are OK -- physically, mentally and academically -- no matter where they are.

"It's definitely not what we expected, but everyone's doing well," Ricketts said. "The girls are doing good. We're adjusting to kind of a new normal."

While doing so, the Bulldogs are still dealing with the fallout of the sudden end to their promising season -- including what could be somewhat of a roster crunch next season.

The NCAA has yet to rule on whether it will grant players an extra year of collegiate eligibility, and for Denis, Leilua, Loza and fellow seniors Christian Quinn and Lindsey Williams, that decision will be consequential. Ricketts said Mississippi State could be hard pressed to find a way for Leilua, who sat out the 2018 season when she transferred from Arizona State, to stay in college for a sixth year.

So far, Ricketts said most of her seniors are leaning toward coming back, but in the absence of a decision from the NCAA, she hasn't asked them to make a lasting choice.

She said her players "took it hard and understandably so" -- but more importantly, they understood the "why" in an unprecedented situation.

"(T)his was bigger than us and bigger than softball, and this was about not just their health but their families' health and this entire country and world's health," Ricketts said. "We talk a lot about softball: It's not who you are; it's what you do. It is something that these girls do every day, and they spend their whole lives doing, but they understand that it's just a small part of what makes them who they are."

At the end of that Thursday practice, Ricketts gathered her team one more time to tell them the second burst of bad news.

As the team huddled in the left-field grass, Ricketts stepped aside to take another phone call. Leilua spoke to the assembled Bulldogs, telling her teammates how much she appreciated them and how proud she was of who they were and what they'd done.

The senior turned to sophomore outfielder Anna Kate Segars, asking her to lead the team in prayer. Segars began the invocation as heads bent slowly toward the grass.

"For that to come from the girls and for it to be so player led as far as just the speaking and the praying, that's what really got me," Ricketts said. "It was a really cool moment to see as a coach when they step up like that, especially as people."

Her call finished, Ricketts rejoined the circle as the meeting began to break up. She saw her players hug; she heard underclassmen tell seniors that they loved them, that they were there for them in uncertain times even if the season was there no longer.