Analysis: A look ahead to the 2020-2021 Mississippi State men's basketball team 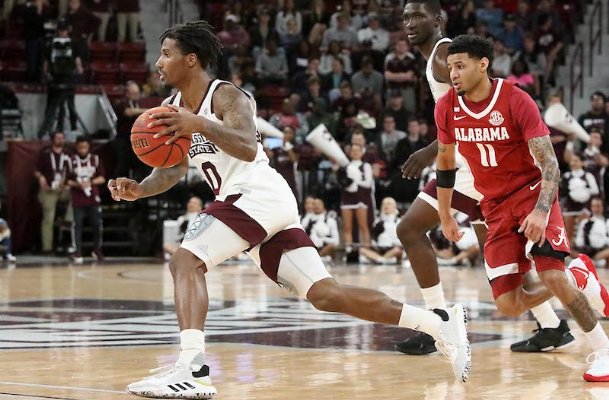 Guard Nick Weatherspoon might have to be the focal point of the Bulldogs' offense next season. Whether heâll do it at point guard or shooting guard is still unknown. Photo by: Jim Lytle/Dispatch file photo

STARKVILLE -- The speculation will go on for months, but no one will really know if Mississippi State had one last run in it at the SEC tournament to get into March Madness. One day before the Bulldogs were scheduled to play a quarterfinal matchup against the winner of Florida and Georgia, the college basketball season was abruptly canceled amid concerns about COVID-19, the disease caused by the novel coronavirus.

It's unfortunate, but the story of the 2019-2020 Bulldogs is over. However, it's never too early for a look ahead to next season. Yet, the makeup of the team could vary drastically depending on decisions several key players will make this offseason.

Here's where the Bulldogs stand:

The lone senior on the team, Tyson Carter, probably had his curtain call in what will likely be his last collegiate game in a 69-44 victory against Ole Miss at Humphrey Coliseum on senior night.

After four years at MSU, the Starkville native totaled 1,352 career points and made 216 career 3-pointers. He became MSU's first-ever player to win SEC Sixth Man of the Year award after averaging a career-best 13.9 points per game in his senior season.

He and his father, Greg, are the only father-son duo in the history of the SEC to amass at least 1,000 points in their collegiate careers. Tyson passed his father's scoring total of 1,123 career points on his birthday earlier this year in a win against Missouri.

The NCAA has preliminary tossed the idea of extended eligibility around for winter athletes that had their season cut short by the virus, and Carter told The Dispatch earlier this week he would consider coming back if granted a waiver by the NCAA.

But as it stands, the NCAA granting Carter another year seems extremely unlikely.

Seemingly one foot out the door

It's not often a sophomore has a swan song moment on senior night, but that's what it sure felt like when Reggie Perry saluted Humphrey Coliseum after being subbed out against the Rebels. Perry was asked about his gesture postgame, and the 6-foot-10 forward snickered and said he was caught up in the moment. Other players beside him, including Carter and junior Nick Weatherspoon, laughed at the remark as if they were both saying "C'mon, man."

Perry was the Associated Press co-SEC Player of The Year award after averaging 17.4 points and 10.1 rebounds per game. It's expected he will declare for the NBA draft.

In his last NBA mock draft, The Athletic's Sam Vecenie projected Woodard will be selected No. 37 overall, higher than Perry, actually (No. 54). Some NBA draft experts think Woodard's game is more suited for the NBA because of his superior athleticism and ability to convert quick mid-range jumpshots. The Columbus native averaged 11.4 points per game, shot 50 percent from the field and 45 percent from beyond the arc last year.

Something to keep in mind, though: school is a huge priority for the Woodard family, considering he was the valedictorian of his senior class at Columbus High School. If Woodard is told by pro evaluators he can expect life-changing money, it would certainly be a hard thing to pass up. Anything other than that evaluation probably ensures Woodard II returns to Starkville for his junior year.

The Bulldogs will have some interesting options here. Weatherspoon will likely be a focal point of the offense again in his senior year after averaging 11.6 points per game. Depending on how fast incoming mega-prospect Deivon Smith transitions to the college game, Weatherspoon could run point again or transition to the two spot. Iverson Molinar showed flashes of brilliance in an up-and-down true freshman campaign and will likely see a larger role a year from now after contributing 15.4 minutes per game this season.

Redshirt freshman D.J. Stewart might be an early favorite for MSU's most improved player next season, considering Stewart rotated between the two and three spots this season and played stout defense regardless. Offense was hit or miss for Stewart, who could be a consistent jump shot away from turning into an all-SEC player.

One thing that will remain consistent is Abdul Ado at center, as the 6-foot-11 post presence enters his senior year. Ado won't move the needle much offensively but is a fantastic rim protector and rebounder. Western Kentucky transfer Tolu Smith will be eligible starting next season and figures to slide into the rotation.

Despite a big offseason in which he dropped 20-plus pounds, junior KeyShawn Feazell became nearly invisible in MSU's lineup down the stretch, but it's likely he'll be given a chance to compete for minutes in the post with Prince Oduro's impending transfer.

If MSU coach Ben Howland is going to go after a grad transfer, it's likely going to be at forward.

The crown jewel of the Bulldogs' recruiting class is Smith, a 5-foot-11 point guard from Loganville, Georgia. Smith is a four-star recruit according to 24/7 Sports and is ranked as the 52nd-best prospect in America.

Cameron Matthews, a three-star small forward from Olive Branch, is the other signee in the class of 2020. Matthews is the second-best prospect in the state of Mississippi, according to 24/7 Sports.