'This is an unprecedented time right now in the history of our world': Vic Schaefer copes with the abrupt end to the Mississippi State women's basketball season 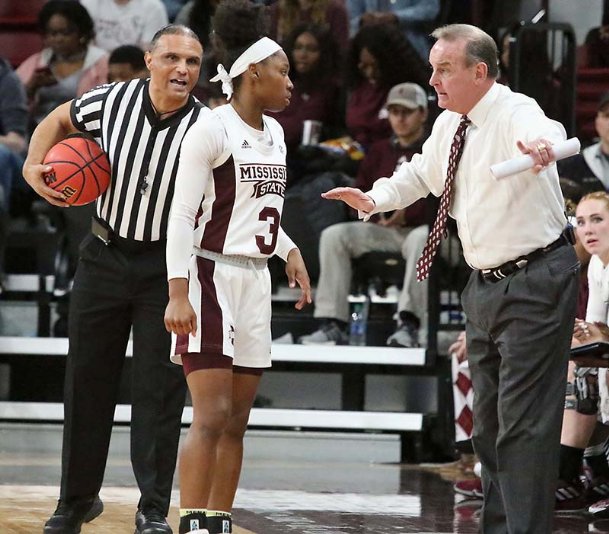 Mississippi State head coach Vic Schaefer talks to Aliyah Matharu (3) during a time-out in the first half of their NCAA college basketball game against Arkansas on Feb. 27 in Starkville. Photo by: Jim Lytle/Dispatch file photo

On a weekend in which 10,000 maroon-and-white-clad fans were scheduled to pack the 45-year-old arena for the first and second rounds of the NCAA women's basketball tournament, Mississippi State coach Vic Schaefer remains in Starkville as his entire 12-player roster has headed home due to the worldwide outbreak of COVID-19, the disease caused by the novel coronavirus.

"I'm extremely disappointed for my players, my coaches," Schaefer told The Dispatch on Friday. "I know how hard they've worked throughout the course of the season and this is what you work for. I felt like this was a team that just like, in the past years, we could get hot and make a run."

Now eight days removed from the NCAA's decision to cancel both the men's and women's NCAA tournaments, the Bulldogs' season has come to an abrupt halt. And while Schaefer remains adamant that basketball is far from the most important thing at the moment, there's a level of disappointment that his 27-6 squad couldn't cap off a resounding "rebuilding" year.

After replacing seniors Jazzmun Holmes, Teaira McCowan and Anriel Howard from last year's Elite Eight team, the Bulldogs welcomed six newcomers to the 2020 squad. In short, Schaefer's and his staff's jobs were taxing. On multiple occasions the eighth-year head coach quipped this year's team might kill him. It didn't. Rather, the Bulldogs thrived -- though it took time.

Losses to West Virginia and Alabama at home were hiccups that past teams with more experience likely wouldn't have endured. Close losses to then-No. 3 Stanford and No. 1 South Carolina were also mitigated by inexperience.

MSU won 10 of its first 11 conference games -- including wins over then-No. 16 Texas A&M and then-No. 23 Tennessee. After being slotted third in the preseason polls by a conglomerate of media members, the Bulldogs placed second in the Southeastern Conference regular season standings.

A run to the SEC Tournament final in Greenville, South Carolina, ensued. So too did a final Associated Press ranking of No. 9 -- marking the fourth straight season the Bulldogs have finished in the AP's top 10.

The Bulldogs took their lumps, sure. But for a program that stands at the zenith of women's college basketball, MSU continued to cement its place among the sport's elite.

"You know, you're just really proud of what this team was able to accomplish," Schaefer said. "And that's why I hate it for them, because I really feel like they could have made a run and we could have gotten hot like we have in the last three or four years and made a big run in the tournament."

And though the successes of the 2020 campaign remain, the stain of a NCAA tournament-less fate endures.

For Schaefer, the offseason brings as much uncertainty as it does hope. It remains unclear when the coronavirus pandemic will cease. Schaefer estimates his team will lose five weeks worth of practice due to recent cancellations. The summer could be similarly difficult.

That said, there's reason for optimism in Starkville. Second team all-SEC performers Rickea Jackson and Jessika Carter are back. So are productive freshmen JaMya Mingo-Young and Aliyah Matharu. Junior sharpshooters Chloe Bibby and Andra Espinoza-Hunter are also slated to return.

Another year brings a set of new faces to Starkville as well. McDonald's All-American Madison Hayes and top-100 prospect Deyona Gaston join the fold. So will former five-star prospect and Michigan State transfer Sidney Cooks, who Schaefer categorized as "unguardable" in practice this season.

Senior guard Jordan Danberry could also theoretically return if the NCAA offers seniors an extra year of eligibility -- though Schaefer isn't sold it will happen.

And while the dust settles on further NCAA legislation and future basketball prospects, the coronavirus continues to spread across the country. Governors in California and New York -- sites of the most widespread outbreak -- have urged citizens to stay at home. According to the Mississippi Department of Health, 140 cases have been reported in the Magnolia State -- including four cases in Lowndes County, one case in Clay County and a death in Hancock County.

It's unclear when society will return to normalcy, let alone basketball season. But to Schaefer, that takes second fiddle. At present, life is about safety -- even if it means Humphrey Coliseum remains empty until next fall.

"This is an unprecedented time right now in the history of our world," Schaefer said. "This time will be in history books 100 years from now. Your grandkids will read about this day in 2020 and what we're going through right now. Unprecedented times require unprecedented measures. And, again, basketball just isn't that important, is it?"