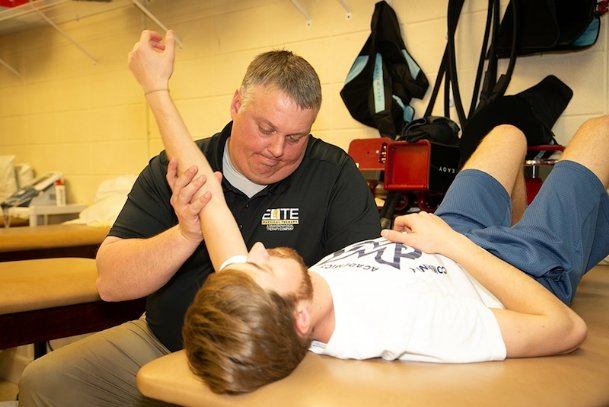 Assigned to write a research paper on a career he might like to pursue after graduating, Miller already had an idea. His brothers John and Scott went on to play college baseball -- Scott at Belhaven University and John at nearby East Central Community College -- but Miller knew he wouldn't follow the same path. Not exactly, anyway.

"I knew I wasn't going to be an athlete at the time, but I wanted to be around something where I could still interact with athletes," he said.

For the subject of his research paper, Miller picked athletic training. He researched the subject, interviewed some local trainers and "just fell in love with it," he said.

"I just realized that's what I felt God was calling me to do," Miller added.

Two years later, Miller started his undergraduate studies at the University of West Alabama, majoring in sports medicine. After getting his master's in health, physical education and recreation at Delta State University, Miller was hired as the assistant athletic trainer at now-defunct Lambuth University in Jackson, Tennessee.

He's never done anything else.

Now the head athletic trainer at the Mississippi University for Women, Miller, 40, has stayed in the career he fell in love with more than 20 years ago. March is National Athletic Training Month, and Miller discussed the ins and outs of a field that is often misunderstood.

"Athletic trainers are there as the first line of defense for many people," he explained.

Treating injuries is likely the most publicized part of Miller's field, but it's only one part of the whole. As an athletic trainer, Miller attends doctor's appointments with athletes, helping them understand what's going on and what they need to do.

He also works to teach relatives, coaches and anyone else who wants to find out more, which can be just as important as training an athlete directly.

"Education is probably the biggest key for athletic trainers because by educating not just the athletes but the people around them," Miller said, "then you can possibly even prevent the injury from happening in those people or happening again with the athlete."

In his career, Miller has been able to educate plenty of athletes, family members and whoever he could. He's worked at The W since February 2019 and became the school's head athletic trainer in June.

Miller works at the Columbus branch of Elite Physical Therapy on North Fifth Street, and he's been on site at sporting events at Columbus, New Hope, West Lowndes, Caledonia high schools as well as Heritage Academy and Columbus Christian Academy.

Currently, athletic trainers in the area "cover" multiple high schools -- Miller always had at least two and as many as five or six at one point. But he expects that to change soon and lessen the burden on each trainer.

"More and more high schools are looking to have somebody there all the time to be there for every athletic event that they have -- not just specific ones -- so that there can be an even higher level of care given," Miller said.

Athletic trainers who enter the field now generally come in with more experience, Miller noted. Many schools offer programs to receive a master's in athletic training -- rather than a degree in sports medicine -- in five to six years, allowing for better preparation.

"They've been introduced to a lot of different things," Miller noted.

The better an education athletic trainers receive, the better they can educate athletes, coaches and relatives -- a fundamental aspect of the job, Miller said.

"We're here to not only make an impact through health care but through the actions that we take as athletic trainers," he said. "Our interest is vested in who we're treating at the time or who we're covering at the time and also the people that are a part of all that."