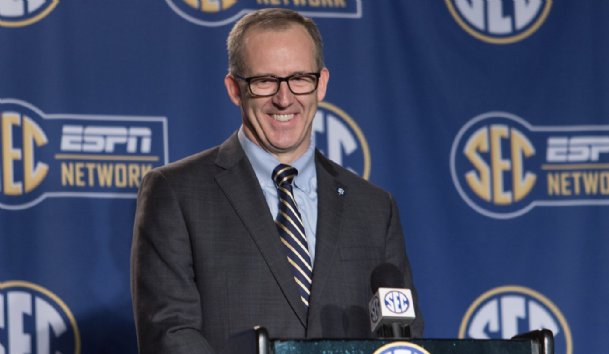 Less than two weeks removed from sitting courtside at the SEC women's basketball tournament in Greenville, South Carolina, as renowned acrobat Red Panda performed a halftime show during a semifinal matchup between Mississippi State and Kentucky, Sankey had clearly shifted his attention swiftly by Wednesday as he fielded questions regarding the SEC's approach to the growing coronavirus pandemic on a conference call with media members.

"Last Wednesday, literally at this time, we were sitting in a athletics directors meeting in the midst of a discussion about the impacts of the coronavirus," he said in his opening statement. "Our imaginations at that time hadn't gone to the extent we've experienced over the last week -- although we had any number of contingency plans."

While the conference officially canceled the rest of its 2019-20 athletic year Tuesday and put a hold on all practices and team meetings -- both voluntary and involuntary -- through April 15, Sankey offered further clarity on the growing impact the coronavirus could have on the impending football season.

"That doesn't mean we'll be back to normal or to practice activities April 16," he said. "It was just a date certain that allows our administrators to communicate with our coaches, our coaches with their student-athletes that has resulted in the departures from campus."

"If you look at the national public messaging about no gatherings above 50 (people)," Sankey continued, "it's certainly difficult to conduct any football practice under that limitation, and even with smaller numbers have been communicated, 10 is often referenced, thereby making it impossible into May, has been stated. So I'm not going to be overly optimistic about the return to practice. We haven't fully pre-closed that opportunity, but I think, practically, that window is pretty narrow."

Sankey also said that his focus remains on going forward with football season as planned when asked if there was a timetable or protocol in which the SEC could cancel football games in bulk, rather than take things week by week.

"We'll obviously think about everything going forward because we're being guided by public health information and decision making," he said. "But my hope is we can return to our normal, organized activities, our normal experiences and be part of that celebration around soccer, cross country, volleyball, football in the fall, but we'll have to see.

"Last week at this time I was preparing for basketball games, and I think all of us will have a responsibility to contingency plan appropriately without making predictions," he added.

Beyond football concerns, Sankey provided added insight into the potential of extra eligibility for those athletes who saw their spring and winter seasons cut short. Given an eight-page analysis of how the issue could be approached by his compliance staff, he and the rest of the conference office are hoping something can be resolved.

"I think that applies to a set of winter sports and would just observe my view we need to work in a time-efficient manner with the spring sports situation," Sankey said. "There does need to be a conversation about the disrupted winter sports, which for us would include both men's and women's basketball, swimming and diving, gymnastics and equestrian. I don't have the answer to that right now, even in my mind."

Sankey also deflected talk of potential for a fall baseball season in which teams could compete for a 2020 league championship in an altered format.

"I've not seen those ideas at this point and would reserve judgment on that in this moment, speaking as a person that played college baseball at a time when you played a lot of games in the fall," he said.