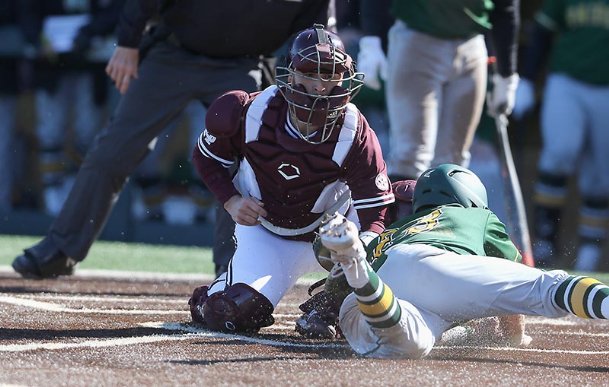 Standing on the bag following his sixth-inning, game-tying, two-run single, Jordan turned to the crowd along the first base line and waved his arms skyward in celebration.

"I thought he was going to get it earlier in the game, but he's a gritty player," coach Chris Lemonis said of Jordan. "That ball kind of got us going -- we'd been waiting for that ball all day long."

After MSU's offense slogged through the game's first half, Lemonis' bunch earned a lead it wouldn't give up by way of a six-run sixth inning.

Following a double from junior Josh Hatcher, a single from freshman Kamren James and a walk by sophomore Landon Jordan -- one of two he earned on the day -- Rowdey Jordan's single through the hole between first and second base drew the Bulldogs and Raiders even.

"The report was that he likes his fastball, heavy fastball guy," he said of Wright State reliever Tristan Haught. "I think it was a 1-1 count, and I knew he was going to come back with it, so I was sitting on it."

On the ensuing at-bat, Foscue flashed the patience that earned him 30 walks to just 32 strikeouts a season ago as he watched Haught deliver three straight balls before he found the zone for a strike.

Stepping into the next pitch, the Huntsville, Alabama, product flipped a ball over the shortstop and into right field as Jordan and sophomore designated hitter Landon Jordan rounded the bags and crossed home.

"We had some pretty productive innings early, and we didn't really take advantage of them, so to get that going was huge," Lemonis said.

While the MSU bats came alive late, it was a middling performance from the Bulldog pitching staff that required its assistance.

Reigning National Freshman of the Year JT Ginn reminded onlookers of his fiery nature as he bounced off the mound and shimmied his shoulders in the second inning after a wicked breaking ball gave him the second of his four strikeouts on the day.

Despite flashes of brilliance, Ginn struggled, as he allowed two earned runs on three hits in just three innings pitched as he worked under a Lemonis-induced 60-pitch limit.

"You've got to tip your hat to Wright State; they grind their at-bats out -- very similar to us -- and they don't chase a lot of pitches, so he was out of there pretty quick," Lemonis said of Ginn. "But I liked what I saw. He competed."

"I don't know if he's walked a guy the entire preseason, and you go out there, and it's just part of it," Lemonis said. "We're going to run him back out there -- he's one of the better pitchers in the country."

Former East Mississippi Community College standout Jaxen Forrester did offer some solace, as he went 1-2-3 and struck out one batter in as the eighth inning, while former Alabama left-hander Jared Shemper pitched out of a bases-loaded ninth-inning jam to close the contest.

MSU and Wright State will meet for game two of their three-game set at 2 p.m. Saturday at Dudy Noble Field.

Lemonis said postgame sophomore catcher Luke Hancock is dealing with a lingering injury that will limit him in the early going this season. Hancock caught three innings, in part due to his past history with Ginn, but he was replaced in the third inning by freshman Logan Tanner.