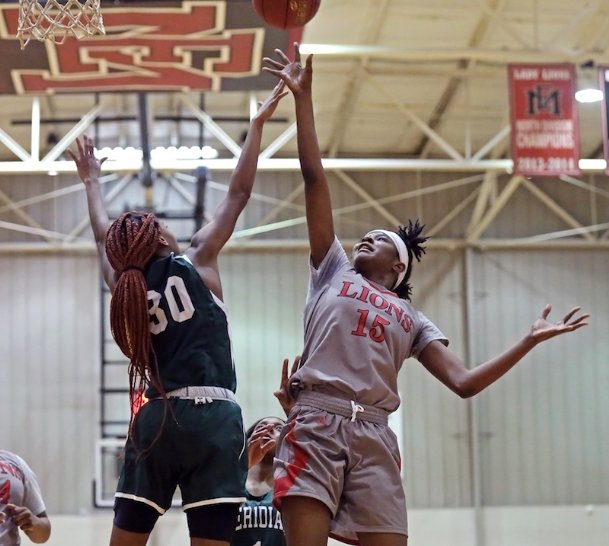 She doesn't stare at the court. Doesn't talk back. Doesn't look away. Doesn't give her coach a funny look.

The 6-foot-1 forward from West Point High School stares right back in the eyes of her coach, no matter Thompson's tone. That's "almost unheard of," the coach said.

"I coach hard, and she accepts that, regardless of how hard I get on her, but I don't have to get on her hard too many days in practice," Thompson said. "She shows up every day."

And when Hollings is there, she's there to learn.

"She listens, and she wants to get better," Thompson said. "It's always, 'Yes, ma'am' and 'No, ma'am.' She's so humble. A kid like that wants it, and a kid who really pays attention, who's paying attention to their coach like that and taking something in? You're gonna get better. You have no choice but to get better."

In her short time in Scooba, Hollings has done nothing but get better. The lanky forward -- whose nickname has been "Sticks" since fourth grade -- has used her size advantage in the post to become a scoring and rebounding force early in her collegiate career.

Hollings is shooting 63.5 percent from the field, averaging 14 points per game and pulling down an average of 9.2 rebounds per night. Helping the Lions to a 19-2 start and a 10-0 record in MACJC North division play, she's won the conference's player of the week award twice this season, crediting her coach for the improvements she's made.

"I've learned a lot from her," Hollings said of Thompson.

Watching game after game in the West Point gym last season, the coach knew what a find she'd made in the Green Wave center. Hollings' 6-1 frame is one thing, but her impressive wingspan is another -- it makes the forward seem two or three inches taller, which stood out even further in high school.

"She did all this stuff in high school: finishes well around the rim, runs the floor well," Thompson said.

Many prep players, Thompson said, require multiple watches to suss out their potential for the next level. Not Hollings.

"Sometimes you go to high school games, it's hard to judge and determine if they'll be successful in college or not," Thompson said. "She wasn't one of those kids."

But Thompson still came back to West Point time and time again "to show some love" -- and to make sure Hollings was sold on staying close to home. EMCC's Scooba campus is basically a straight shot down US-45 Alternate from West Point.

"I'm really close with my family and family oriented, and those are the characteristics and traits that we want within our program," Thompson said. "I think that played a big role: her being less than an hour from her family."

Hollings started her EMCC career taking classes over the summer, and it wasn't long before Thompson saw her studiousness in action. The forward has never missed a class, her coach said, and Hollings picked up a 3.7 GPA in her first semester.

Combined with her basketball prowess, that makes the freshman an intriguing option for Division I programs. Coaches flocked to Monday's home game against Northwest Mississippi Community College to watch Hollings; she had a rare off game, shooting 3 of 8 from the field and scoring just nine points. It was the freshman's first single-digit scoring total since Dec. 16 at Snead State Community College.

Hollings knows she's still in need of work on her defense before playing at the next level. She likes to reach, according to sophomore guard Tye Metcalf, and though her footwork is good on offense, matching that on the defensive side of the ball would go a long way.

Hollings' thin frame -- 'I'm always skinny' -- earned her the "Sticks" moniker long ago, though she said she doesn't mind it. The nickname has become so common that her teammates and coaches never call her anything else.

"They may not always know who 'Ja'Mia' is," Hollings said.

But the Division I programs recruiting her certainly know. Thompson said scouts look to see how Hollings interacts with her teammates and with EMCC's coaches. There, Hollings' willingness to take criticism and improve stands out.

"They're gonna really take note when a coach is getting on a kid: 'How does that kid react to the coach?'" Thompson said. "She passes all those tests."