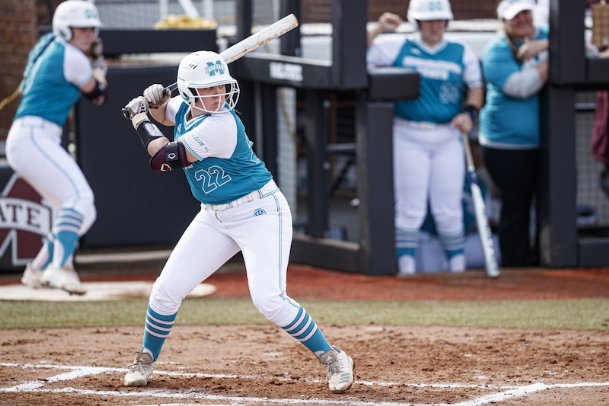 The Bulldogs jumped out to an early lead in Wednesday's home opener against Alabama State at Nusz Park in Starkville, leading 2-0 at the end of two innings.

But in the third, the Hornets woke up. Kindall DeRamus brought home a run with a single up the middle, and Alexis Sydnor lashed a double off the left-field wall. Just like that, the game was evened at 2-2. Mississippi State coach Samantha Ricketts knew the Bulldogs couldn't afford to stay tied for long.

"We know for our expectations if we want to be an elite team that we're gonna need to answer back in a big way, especially when a team ties it up on us," Ricketts said.

On Wednesday, at least, the Bulldogs passed that test. In the bottom of the inning, freshman shortstop Madisyn Kennedy broke the tie with a three-run home run off the netting protecting the scoreboard in left field. Mississippi State (5-0) turned on the jets from there, scoring five more runs in the inning and adding six more in the fourth to speed away to a five-inning 16-2 win over Alabama State (2-4).

Leilua, too, was a big part of the Bulldogs' scoring outburst, opening and closing the scorebook for Mississippi State. In the first inning, she sent the first pitch she saw to straightaway center field for a solo home run.

"If you're gonna make something happen, you've gotta jump on them early, so that's what I was waiting for," Leilua said.

In the fourth, she attacked the trees behind the left-field wall with a no-doubt two-run shot.

"With Fa, it's just another day," Ricketts said. "It's just fun to see her doing what she does best: not missing pitches that are left on the white and hitting them a long way."

The Bulldogs' whole offense was similarly locked in Wednesday, pounding out 16 runs on 14 hits against the Hornets. It was the most runs Mississippi State has scored since an 18-run outburst against Arkansas on April 26, 2014.

Senior second baseman Lindsey Williams led the team with four runs batted in, including a two-run homer that cleared the fence in left field in the fourth inning. She also drove home Anna Kate Segars with a single in the second inning and was hit by a pitch with the bases loaded in the third.

In that third frame, in which the Bulldogs scored eight runs, Mississippi State took advantage of a host of Hornets mistakes. After a pitching change with runners on the corners, catcher Jackie McKenna walked to load the bases, and Williams was hit by the first pitch she saw. Senior left fielder Candace Denis followed with a chopper to second base, but Alabama State second baseman Jamaica Flowers threw high and hard, and the ball was deflected off the first baseman's glove and out of play, bringing two runs home. Sophomore right fielder Chloe Malau'ulu followed with a two-run single just out of Flowers' reach, and the Bulldogs' lead had ballooned to 10-2.

In the fourth, a pair of freshman pinch hitters started the damage. Brylie St. Clair ripped a run-scoring triple to right field, and Kiki Edwards immediately followed with a double to plate St. Clair. Williams and Leilua rounded out the inning with a two-run blast apiece.

Altogether, it was an excellent team effort for the Bulldogs, who improved to 5-0 after going undefeated at the NFCA Leadoff Classic last week in Clearwater, Florida, and capturing the tournament title.

"It's very early, but it does feel good," Ricketts said. "I think the biggest thing for us is getting them to understand that what we're doing. The start we had over the weekend, that comes based on the work we do every day in practice. We talked early on that we've got 100 days together to practice and be out on the field and only 50 game days. We need to work hard and outperform everybody in practice and push each other, because that's what makes those game days really special for us."