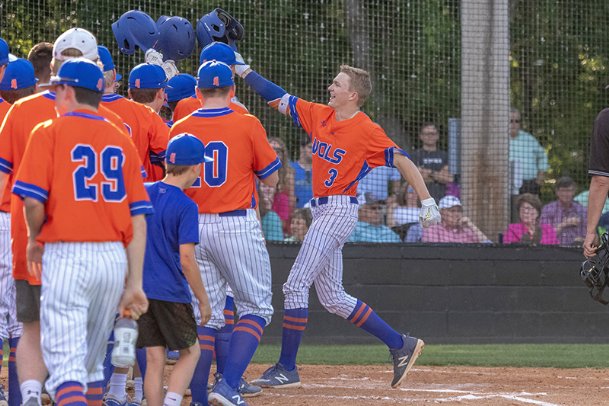 STARKVILLE -- Justin Rook is back home.

"They welcomed me with open arms," he said. "It was almost like I never left."

Rook is just one of the plentiful newcomers on this year's Starkville Academy squad, and after a host of seniors graduated after last season's run to the north state championship series, the Vols will have a different look.

With Rook and fellow Starkville High transfer Kamden Upchurch aboard and the pitching upside of sophomore Ayden Alsobrooks, a transfer from Picayune, Starkville Academy is receiving an influx of skilled players all over the diamond.

"We've got a bunch of young guys that really have a lot of talent," senior center fielder Sam Clark said. "I feel like they can step into those roles that the seniors graduated out of last year."

Griffin Little, Howell Archer and Will Miller were key parts of last year's senior class, but now it's up to last year's juniors to fill their roles for the first time.

"What I've told people is that these guys are good enough to do it; they just have never had to," Starkville Academy coach Thomas Berkery said. "Until that moment happens where they take the bull by the horns and actually get the RBI, get the big two-out hit, they're just gonna have to do it that first time and kind of get over the hump."

If the team's seniors can get over the hump, maybe the Vols can, too. They were stymied by rival Heritage Academy in the north state final, dropping the decisive third game of the series 15-10.

Berkery has made his team's task clear: Don't dwell on that loss.

"I think these guys have long forgotten about it," Berkery said. "It's gonna be one of those things that as we get closer to the series with them we may think about a little bit more, but I think right now we're confident, we're excited, and we've been working hard. We're ready to go."

The Vols were ready as soon as Friday, when they were set to play Oak Hill Academy to start the season. But the game was rained out; so were contests scheduled for Monday and Tuesday. Starkville Academy's season will -- weather permitting -- begin at 4:30 p.m. Thursday at Hartfield Academy, one of the tough teams in a new reclassification for MAIS Class 4A. With the Hawks, Heritage Academy and Magnolia Heights all looming, Berkery and his players know the path to contention won't be easy. But the Vols are still confident.

"I look at this team as a state champion," Rook said. "I think we 100 percent have the talent to go all the way and actually get it done."

With the presence of former MLB star Roy Oswalt, whom Berkery hired as the Volunteers' pitching coordinator before last season, Rook couldn't say no to coming aboard.

"Every time you pitch, he teaches you something new," senior Michael Winfield said. "He's definitely helped me with my velocity and even my spin rate and just grips on any pitch. His knowledge is unlike anybody's I've ever seen."

Oswalt said that his goal is to teach the Volunteers' staff how to pitch deep into a game while minimizing their pitch count.

"If they can do that, we're gonna win a whole lot of ballgames," Oswalt said. "That's how I had success in the big leagues: getting deep into games, winning the games late, and that's what I'm trying to teach these guys."

"He takes off and runs with it. It allows the other coaches to focus on getting our hitters ready and getting our defense ready and not have to even worry about pitching.

"The guys buy into what he's doing, what he's talking about," Berkery added. "The good thing with him is that none of what he teaches, he made up out of thin air. It's all proven fact and stuff that's worked for a lot of years for a lot of big leaguers."

Along with that training, Winfield said, Oswalt tells stories, too: about his time playing at tiny Weir High School. How he pitched every game; how his arm never hurt.

Oswalt is "kinda scary sometimes, but he's a fun guy," Lewis said. "Somebody who made it that far, he obviously knows what he's doing. You've gotta listen to him."