Returning most of last season's title team, Heritage Academy baseball is primed for a repeat 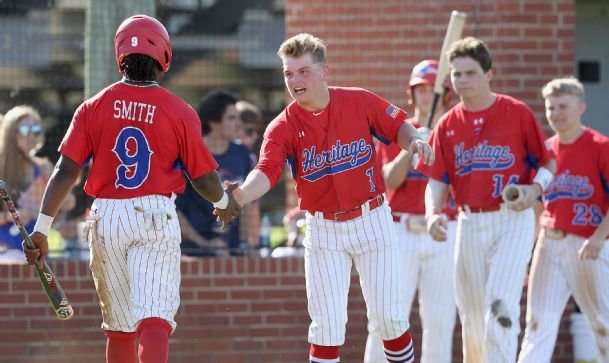 KJ Smith is greeted at home plate by Blayze Berry and his Heritage Academy teammates after hitting a home run in the first inning of a game at Starkville Academy last season. Photo by: Jim Lytle/Dispatch file photo

Even after the poor start last February, the right-hander took stock of the team around him and knew the Patriots still had the talent to win the state championship. That's precisely what Heritage Academy did.

And this season, nearly all of that title-winning team is back for more. Heritage Academy returns its top three starters -- Ketchum and seniors Blayze Berry (a Mississippi State commit) and Banks Hyde -- and seven of its nine regular hitters from last season.

So no matter how the Patriots' season starts, Ketchum said Monday, his faith won't be shaken.

"Even if we lose a couple games in a row, I have no doubt that we'll win the state championship this year," he said.

Heritage Academy beat Wayne Academy in two games in last year's best-of-three title series for the first state championship in school history, and ahead of the team's Feb. 17 opener at Columbus High School -- scheduled games against Madison-Ridgeland Academy on Monday and North Delta School today were rained out -- Ketchum said the Patriots want to prove they're among Mississippi's elite programs.

"I don't think there's any pressure just because I feel like we're one of the best teams in the state," Ketchum said. "I feel like we know that; we've just gotta go out and show everybody else."

With a rematch against Jackson Prep on Feb. 22 and a possible playoff meeting with Magnolia Heights down the line, the Patriots can avenge last year's losses to those two teams. If they can do that, Ketchum said, Heritage Academy would be well on its way toward reaching the elite status attained by schools like Madison Central and DeSoto Central.

Reclassification in the Midsouth Association for Independent Schools will bring changes for the Patriots this year. Heritage Academy head coach Justin Flake pointed to Class 4A opponents Oak Forest Academy and Silliman Institute -- both of Louisiana -- as well as Magnolia Heights, Hartfield Academy and Simpson Academy.

"It's a new challenge," Flake said. "Different classification, different road, different teams that we'll have to go through to get there."

But at least one of those opponents will remain the same, seemingly forever: Starkville Academy, whom the Patriots outlasted in a back-and-forth three-game series to win the north state title this past May.

"It's the Golden Triangle's version of the Yankees-Red Sox," Flake said. "All bets are off whenever you're playing because it can get crazy like it did last year in the postseason."

Ketchum, who committed to Ole Miss the summer after his freshman season, was confident the Patriots' roster could rival that of the Volunteers -- or any team around.

He said he, Berry, Hyde or senior Carter Putt could all be the No. 1 pitcher for any school and that the Patriots are lucky to be able to rotate all four. In the Pats' potent lineup, Ketchum said the same thing holds true.

Junior third baseman Aaron Downs, in his first year with the Patriots after transferring in from Pella, Iowa, is sure to make an impact -- as soon as he makes his return from a wrist injury. Flake said the power-hitting University of Louisville commit will likely be out until spring break, which starts March 9.

But while Downs and senior left fielder KJ Smith are examples of players who are "staples" at their positions, Flake said there's still a lot up for grabs as the start of the season nears.

"There's playing time available for guys who want to step up and get it," Flake said.

With only two starters having departed -- JR Lott and Parker Ray -- Smith said he's confident that the Patriots' familiarity will play to their advantage.

But no matter how much experience the Patriots have, it's a new season with the same expectation: not merely backing up their title but in active pursuit of a repeat.

"It's not like we're 'defending,'" Flake said. "We're going in to try to get another one."