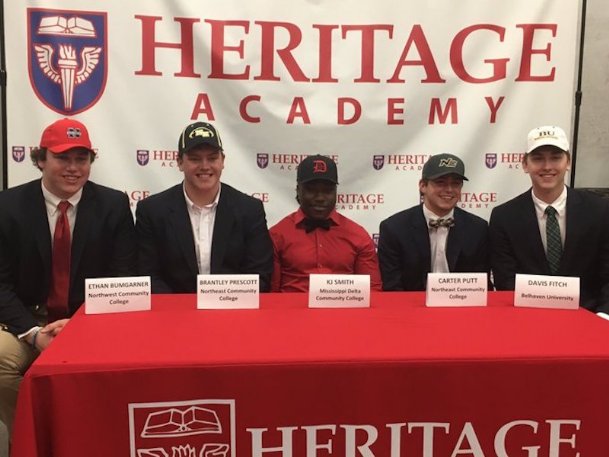 Heritage Academy football coach Sean Harrison knows he can't be in two places at once.

Seniors Eli Acker (Ole Miss) and Jared Long (Central Arkansas) signed their national letters of intent Dec. 18, and during a ceremony Wednesday for National Signing Day, five more of Harrison's players signed theirs to four different schools around the state.

That has Harrison conflicted when he seeks out former players to watch next fall.

"That's what I told my wife: I'm trying to figure out how in the world I'm gonna get to see them all," Harrison said.

It's a good problem to have for Harrison. His team romped to a state title without a single loss, allowing fewer than 10 points per game and enacting the mercy rule Friday after Friday.

"I think it's a testament to them, their parents, the school community," Harrison said. "I think having over 50 percent of your senior class sign is unprecedented here and probably a lot of places. We were blessed with a great group of kids. Seven signings shows you why we went 14-0."

To Putt, the accomplishment is more than that. With Smith coming to Heritage Academy from Columbus High and Prescott coming in from New Hope, the special season is an example of the Patriots coming together to reach their goal.

"It just shows that no matter where you come from, you can do anything," Putt said.

He'll again team up with Prescott, who joked Wednesday that he and Putt are undefeated together after their first year playing football on the same team.

"It's neat that the center-quarterback exchange is gonna keep going," Harrison said.

For Prescott, it's "all family" even when he and Putt match up with their former high school teammates next season.

"We're all proud of each other, even though some of us will play each other next year," Prescott said.

Fitch, who signed with NCAA Division III Belhaven, will likely be the odd man out when it comes to scheduling. He didn't receive much recruiting interest until Belhaven made the short trip across Jackson to watch the Patriots rout Starkville Academy 55-10 in the MAIS Class 5A title game.

"We tell these kids all the time, 'You never know who's watching,'" Harrison said. "Nobody was on Davis, and then Belhaven sees him in the state championship game and falls in love with him, watches his film and comes and offers him."

It was a similar case for Smith -- Harrison said he was "shocked" at how long it took for a school to offer the talented back, though a few opportunities came in late.

But at Delta, Smith will be reunited with his brother, former Heritage Academy assistant Tobias Smith, now the offensive coordinator for the Trojans.

"KJ ended up with a couple offers, and I had a feeling that he'd go to Tobias," Harrison said. "We hated to lose Tobias but so proud for him and his opportunity. That's gonna be a neat deal: KJ knows he's gonna be featured."

For Bumgarner, too, it was sort of a family affair. The lineman was able to fulfill a promise he made to his parents long ago: They wouldn't have to pay for him to go to college.

"It means the world to me," he said Wednesday. "It's just surreal."

It's the same for Harrison, who said Bumgarner will always be special to him. After starting the first two games his sophomore season, Bumgarner didn't play much the rest of the year. But he didn't get down -- he got better.

"He took it as motivation," Harrison said. "He wasn't sour about it. He was the ultimate teammate and worked his tail off in the weight room and has gone and earned everything he's gotten. I'm excited to see his next signing day and where it is."

Indeed, that could be the case for all five Patriots who signed Wednesday. They all hope to play at the Division I level, and all of them have confidence in each other, too.

"Just know my 2020 class, we're coming for everything they said we couldn't have," Smith said.