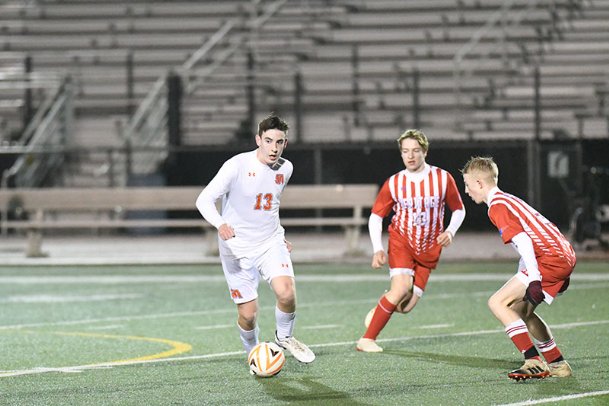 The scoring problems that had plagued the Starkville Academy boys soccer team all last season arose again in the team's MAIS North semifinal against rival Heritage Academy in the rain at Starkville High School. Down 2-1, the Volunteers had their chances -- 12 corner kicks in the match; a couple late shots -- but couldn't scratch across an equalizer.

It left Pollan, then a freshman defenseman for the Vols, disappointed -- yet determined for his next season.

With Tuesday's opener against Laurel Christian, that promised next season is here, and Pollan and the Volunteers have put in the work they needed to overcome their offensive shortcomings.

"Not being able to finish, that was a big thing for us last year," junior Wilkes Stubbs said. "We just know what needs to be done, and we're gonna get it done."

After the Volunteers graduated three starting midfielders, a reserve midfielder and last year's starting goalkeeper, first-year head coach John Morgan knew a change had to be made.

Both Stubbs, typically a forward, and Pollan were moved to the midfield position. They'll anchor a position grouping among the strongest on the team.

"It's a switch-up, but I'm confident in it," Pollan said. "Defensive mid's more fun to me."

The Volunteers are still young -- Noah Aweau, a wide receiver and safety on the football team, is their only senior. But the team's been together a while (Pollan has played with several teammates since they were 10 years old in recreation and travel leagues) and doesn't depend on the play of one single star.

"We have a very solid group that's played together for a while and are veterans and are pretty experienced with each other, and that's pretty good to have," Morgan said. "Where most teams have one or two key players they try to go to, we have five or six. At a level like this, that's extremely important to have."

Morgan isn't done evaluating his team, which practiced Monday for just the fifth time all year. With the Vols' football team in the state championship, he said, practice time was hard to come by.

"We have guys that can fit in pretty quickly, but regardless, when you have four days, it's a bit of a challenge to get everybody on the same page," Morgan said.

But with the talent they possess, the familiarity they've long had and the work they've put in, the Volunteers are getting there.