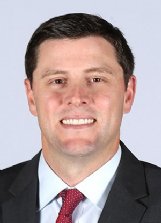 OXFORD, Miss. -- Mississippi athletic director Keith Carter wants to find a football coach who can bring new energy to the program and excite a fan base that has grown apathetic.

Carter is seeking a replacement for Matt Luke, who was fired Sunday after going 15-21 in three seasons. Luke posted a 6-18 record in Southeastern Conference competition.

"We've got to find a head coach who can walk into a room, and absolutely take over that room and galvanize people, bring them back," Carter said. Ã think people want to support, they want to come back, they want to come to Ole Miss football games, but we just lost some of that luster.

"I think bringing someone in who has energy, who can walk in and kind of own a room and be charismatic and make sure they're talking about the future and vision of Ole Miss football, I think we can get people back quickly."

Carter cited a lack of fan support and declining ticket sales as a reason for the change.

Luke began his tenure as Ole Miss' interim head coach after Hugh Freeze resigned in the summer of 2017. After Ole Miss went 6-6 in 2017, Luke got to keep the job.

When Luke was hired by former athletic director Ross Bjork, it was considered a potentially hard sell because Luke had no previous head coaching experience aside from that season-long interim stint.

"What I just kept coming back to is while we could see some progress in certain areas and we've been competitive on the field in most games this year," Carter said. "It just felt like the apathy around the program and the lack of support were going to be hard to overcome."

Carter is launching this search less than two weeks after having the interim tag removed from his own title. He was named Ole Miss' athletic director Nov. 22 after filling the role on an interim basis since May.

During his introductory press conference 10 days ago, Carter said he believed the football program was "headed in a great direction" and added that he was "so excited" about Luke.

Since that news conference, Ole Miss lost 21-20 to rival Mississippi State in the Egg Bowl to finish a 4-8 season. Ole Miss missed a potential game-tying, extra-point attempt from 35 yards out in the closing seconds after Elijah Moore received an unsportsmanlike conduct penalty for celebrating a touchdown by hiking his leg like a dog and pretending to urinate on the field.

"We are not seeing enough success on the field," Carter said. "From a recruiting, academic and cultural standpoint, Matt did a tremendous job and I am grateful to him for that. However, as I said, winning is important and we know that we can win at Ole Miss and compete in championships."

Luke was popular with his players. Carter acknowledged that about 8-10 players walked out of a Sunday night meeting announcing Luke's dismissal before the meeting had ended.

"I'm not mad or angry at those players," Carter said. "It was an emotional day yesterday. They loved coach Luke. We all love coach Luke. I totally understand the emotions. I remember when I was 18-19-20 years old. Emotions sometimes can get the best of you. We absolutely are going to do everything we can to support those guys."

Carter hinted that a search for the next head coach had already begun. Carter helped lead the Ole Miss basketball coaching search that resulted in the 2018 hire of Kermit Davis, who led the Rebels to an NCAA Tournament berth in his debut season.

Carter is using the Ventura Partners search firm, which also assisted in the Davis hire. Carter said he would prefer a sitting head coach or a Power Five coordinator but would remain open-minded in finding the best overall fit.

"We are going to work very quickly," Carter said. "We will be efficient. When it comes to sitting down with candidates, it will just be me. We will be very competitive. We will go out and find the best head coach for us and do we will do what we need to do financially to get that coach."