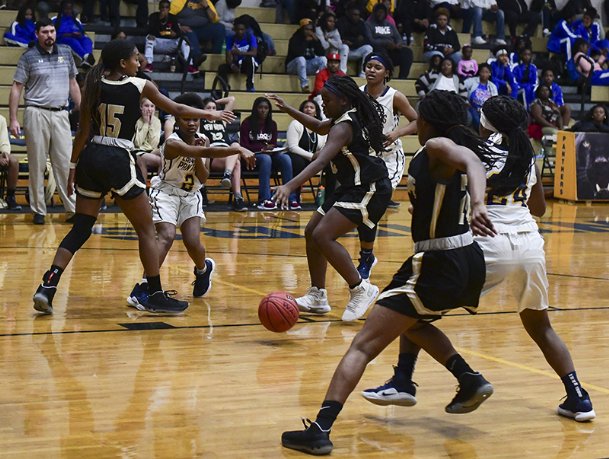 When West Lowndes senior guard Averi Sanders jumped the passing lane for a steal and a breakaway layup with under a minute to go in the third quarter Saturday, she did more than simply double the Panthers' lead to four points.

She continued to frustrate visiting New Hope, brought her own home crowd to a crescendo and gave West Lowndes the spark it needed.

"That's really what got us motivated and ready to play some defense," West Lowndes coach Takeea Bozeman said.

The Panthers (3-0) held the Trojans (2-3) to just four points in the fourth quarter, sealed the game at the free-throw line and walked out of their home gym with a 55-42 win over their rivals.

New Hope coach Nick Christy, who led the West Lowndes boys team for the past two years, also felt great -- until around halfway through the fourth quarter.

The game was still manageable for the Trojans, facing a three-point deficit, until West Lowndes junior Tydajasha Hood buried a 3-pointer with 4 minutes, 7 seconds to go, and junior Quankeria Halbert followed with a layup. The Trojans, soon forced to foul with under two minutes left and an eight-point deficit, put Hood at the line five times, and she converted on five foul shots in all to ice it, playing through a jammed finger earlier in the quarter.

"I just wanted to win, and I didn't want them to catch back up," Hood said.

Hood achieved her goal and then some, notching a major win for the Class 1A Panthers and ending Christy's homecoming on a sour note.

"It was good to come back," Christy said. "I just definitely wish the outcome would have been a little bit different for us."

It looked that way after New Hope went on an 11-0 run in the first quarter, keyed by six points from senior center Juquala Sherrod alone.

For Christy, who challenged his post player to play with aggression, it was a welcome sight.

But after 10 points in the first half, Sherrod scored just four in the second as the West Lowndes defense clamped down and its pace sped up.

"Because we didn't control our composure, we missed some opportunities to her in the second half," Christy said.

"Our goal was to hold the ball as long as we could," Bozeman said. "We run the floor. We practice getting back at a quick speed."

That effort in practice showed on the court, and it helped the Panthers to a rivalry win after each school won once last season. The two teams will play again Dec. 9, but for now, West Lowndes will enjoy its victory.

"It feels good," Bozeman said. "We split it last year, so this feels good."