Anatomy of an upset: How Joe Moorhead led FCS Fordham to wins over two FBS opponents 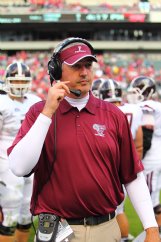 While coaching at Fordham, Joe Moorhead led his team to several notable wins against FBS programs.
Photo by: Fordham athletics

STARKVILLE -- Fordham wide receiver Brian Wetzel raced across the back of the end zone at Lincoln Financial Field in Philadelphia.

Stopping, planting and throwing, Nebrich lofted a ball toward the corner.

Wetzel thought the pass was headed his way -- Nebrich had even told him as much before the play. It wasn't.

Leaping skyward, Ajala grasped the ball and tapped his feet before crashing to the ground for the game-tying 29-yard touchdown.

The Rams were an extra point away.

"We had a defensive lineman about half a foot away, ready to sack him" then-Temple coach and current Baylor coach Matt Rhule told The Dispatch. "Their receiver did a great job of stepping up and boxing our guy out."

On the ensuing extra point, Rhule twice called timeouts in an attempt to ice Brooklyn-born kicker Michael Marando. It didn't matter. Marando booted the ball through the uprights one last time. Upset secured.

Six years on from Fordham's historic win over Temple -- its first against an FBS team -- Mississippi State coach Joe Moorhead -- then the head coach of the Rams -- finds himself on the flip side of that matchup as FCS foe Abilene Christian heads to Starkville Saturday.

And while the Bulldogs come into the contest as heavy favorites, Moorhead is well aware of the attitude the Wildcats will bring with them.

"In an FCS program, the kids look at this (game) with a chip on their shoulder and a chance to compete against players at the highest level," Moorhead said Monday.

'You went into that game expecting to win'

In Moorhead's four years in the Bronx, he guided the Rams to a 2-2 record against FBS competition with wins over Temple in 2013 and Army in 2015.

"Not a whole lot real positive," Rhule said with a laugh, recounting Fordham's win over Temple.

Rhule -- who was in his first year guiding the Eagles at the time -- was fresh off near-upsets of No. 14 Notre Dame and a Houston team that would win eight games that year.

As for Moorhead, the Rams entered the contest having already knocked off FCS No. 8 Villanova in arguably the biggest win in program history.

With a steady game plan drawn up and a productive week of practice, Moorhead's Fordham squad rolled into Philadelphia confident in its ability.

"We didn't go into Temple hoping to win or go in there hoping to play in the game," running back Carlton Koonce told The Dispatch. "You went into that game expecting to win."

Riding the arm of Nebrich -- who completed 23 of 36 passes for 320 yards and two touchdowns on the day -- the Rams jumped out to a 13-7 halftime lead courtesy of a Koonce touchdown run and two field goals from Marando.

Fordham further distanced itself when Wetzel beat his man for an 18-yard score on a post route to put the Rams ahead by 13 to open the second half.

The Eagles responded. Rattling off a 21-3 run, Temple led by six points with 4:29 remaining and the Rams taking over at their own 29 yard-line.

First, Nebrich hit receiver Tebucky Jones with a seven-yard pass. Koonce followed with a six-yard scamper. Nebrich then hit Ajala for a five-yard gain. Nebrich next added one and two-yard rushes of his own.

With fourth down upcoming at the Temple 49-yard-line, Moorhead called timeout. Another Nebrich run followed. He got it. Barely.

"It was the perfect play for Fordham and I'm sure it was a dreadful day for Temple," Ajala told The Dispatch.

Players spilled into the end zone as a dog pile began to form at the pylon. Ajala was at the bottom. Wetzel was right beside him.

After a 1-10 season two years prior, Fordham had secured its first win over an FBS team in school history.

"We were all up against the wall getting hugs and cheering with (the fans) and it was just a surreal feeling," Wetzel said.

"There's no better feeling than winning a game like that," he continued.

While Fordham's win over Temple was among the signature victories of Moorhead's time in the Bronx, perhaps no win tasted sweeter than a payback victory over neighboring Army on Sept. 4, 2015.

Having stabilized Fordham's program with a 29-10 record over his first three seasons, Moorhead and the Rams entered the year confident, but young.

Thirty seniors had graduated that spring -- 18 of whom were starters. The Rams were so thin on experience, then-sophomore quarterback Kevin Anderson -- who hadn't thrown a competitive pass since high school -- was named a captain.

But for what Fordham lacked in number of veterans, it made up for in running back Chase Edmonds. Edmonds -- now a member of the Arizona Cardinals -- ran for 1,848 yards and 23 touchdowns on 294 carries the year before, earning FCS Rookie of the Year honors.

"I wasn't even really old -- I was just a sophomore," Edmonds told The Dispatch, laughing through his response. "I knew everybody was looking up to me just because of the year I had my freshman year and I just went at it with the mentality that I was the best player on the field and had to prove it."

Despite being ranked in the FCS preseason poll, the Rams were given little chance against the Black Knights after they were defeated 42-31 the year prior.

Clambering off the buses and into Michie Stadium, the Rams could see a small pocket of Fordham fans that made the hour-long drive from New York City to West Point as Bear Mountain stood watch in the distance.

Anderson had a read to make. Taking the snap on the game's first play from scrimmage, he was to watch the defensive end. If he crashed, he'd hand the ball off. If he stayed on the running back, he'd tuck it and run. He chose the former -- at least in theory.

Reaching out to hand the ball off, Anderson bobbled it before it fell to the turf. Army recovered.

Heading to the sideline, the wide-eyed sophomore was greeted by Moorhead -- who remained confident in his youthful signal-caller.

One possession later, Anderson capped off a six-play, 77-yard drive with his first collegiate touchdown run. The Rams were back.

As the back-and-forth affair waged on, Anderson concedes he made plenty of mistakes -- including taking a knee instead of spiking the ball as the Rams drove for points at the end of the first half.

"I think I remember coach Moorhead saying something explicit to me that I definitely deserved," Anderson quipped.

Despite the miscues, the Rams took an eight point lead into the final three minutes of the game.

The Rams' belief in an upset persisted.

Sitting in his dorm room a few days before the game, linebacker Caleb Ham facetimed his father Tracy, a College Football Hall of Famer and former quarterback at Georgia Southern -- one of the birthplaces of the triple-option offense.

Facing a similarly-styled attack that weekend in coach Jeff Monken's Army team, Caleb hoped his father could provide some more insight into what he'd see Saturday.

For over two hours the pair watched film together as Tracy helped dissect the Black Knight offense.

"When we sat down that one time and watched film, it did something to my brain," Ham said. "It clicked in my head -- 'This is how you prepare for games.'"

After an equally contested second half, Army inched closer to the underdog Rams. Quarterback Ahamad Bradshaw hit Jordan Asberry for a 33-yard touchdown strike with 2:47 remaining.

Needing a two-point conversion to tie, Army lined up at the Fordham two-yard-line.

Standing at outside linebacker, Ham had been tasked with taking the pitch man in whatever version of the option the Black Knights ran -- until now.

As Bradshaw took the snap, Ham ducked the fullback and lunged forward. Clipping Bradshaw's feet, Ham crashed to the ground. So too did Bradshaw. Fordham had the stop it needed.

"For that to be our second win over an FBS team at that point in the year with who we had on the roster -- it was a great win for the program," Moorhead told The Dispatch.

Hanging in the head coaches' office at Fordham, a picture of the scene following the win at Army hung as a reminder of the win at West Point.

Snapped moments after Anderson took the final knee against Army, the photo depicts he and Edmonds embracing on the field.

In the background, Anderson could even make out a sign held by his family at the top of the scattered remnants of the Fordham faithful wishing him and the Rams good luck.

"That was just an incredible moment for me as an athlete," he said.

Saturday, Abilene Christian will enter Davis Wade Stadium with the hopes of etching itself into the FCS history books with a win over an SEC school. But if Moorhead has his way, the Bulldogs will find themselves in anything but a close contest.

"I know (Abilene Christian) is going to be fired up and I know they are going to be excited," he said.