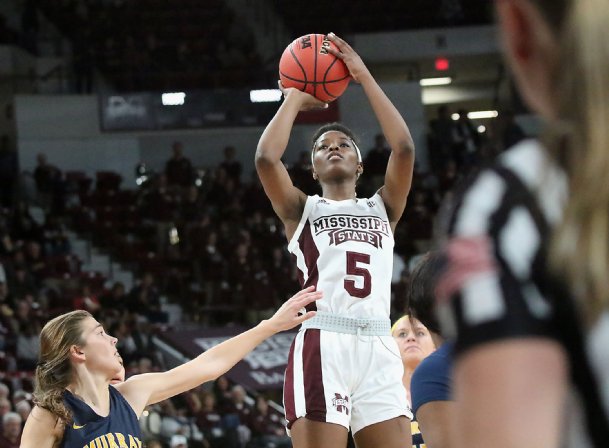 Shaking off a handful of low-scoring outputs, Jackson finished her night with 13 points on 6 of 13 shooting as she guided Mississippi State (5-0) to a 92-53 victory over Jackson State (1-4) at the Williams Assembly Center.

"I thought she provided a great spark in the first half," coach Vic Schaefer said. "Thought she was solid all night long -- she didn't settle, she attacked."

Despite having scored in double-digits just once this season entering Thursday, Schaefer has remained complimentary of Jackson's play publicly. That said, he brought his star freshman off the bench for the first time this year Thursday -- starting junior guard Andra Espinoza-Hunter in her place -- in hopes of sparking his former five-star recruit.

"It definitely gave me a different look," Jackson said postgame. "Just to see the person I'm trying to guard how she plays -- it gives me a heads up. I kind of like it."

After not playing the first quarter, Jackson recorded 11 of her 13 points in the game's second 10 minutes. Flashing dynamic ability in the post and from beyond the arch the former McDonald's All-American gave the Tigers fits throughout the period.

Taking a pass in transition, Jackson bore down on an isolated JSU defender. Planting with her left foot before stepping around the defender with her second move, Jackson flicked a finger-roll layup off the glass and as the 2,305 fans in attendance oohed and ahhed.

"Myah (Taylor) always takes charges on me (in practice)," Jackson said postgame. "And in high school I would just go into them -- so Myah actually taught me how to euro-step around so I don't hit the charge."

Jackson also knocked a 3-pointer for the third-straight game, hitting a shot from the top left corner -- bumping her average up to 39.6 percent from behind the line this year.

"She's a really good athletic player and we have to know where she is at all times," Jackson State coach Tomekia Reed said. "We went to sleep. We let her get lost. And bringing her off the bench was key because we were practicing for her to start."

This isn't to say Jackson's night was seamless. As the Bulldogs pulled away in the waning stages of the third quarter, Jackson set a screen for Taylor at the top of the key, but was dinged with an offensive foul for shuffling her feet on the play.

Jackson also forced Schaefer to use a timeout as she dribbled off her foot 40 seconds into the fourth quarter before falling on the loose ball.

"She's got all the tools, we've just got to get her in the right positions to put them to use and be successful," he said.

And while Thursday's result wasn't perfect for Jackson or the Bulldogs, Schaefer was adamant that a productive Jackson changes the trajectory of his squad.

"I've got to get her right -- that's the bottom line, that's my job," he said. "So maybe this will kind of get her moving in the right direction tonight."