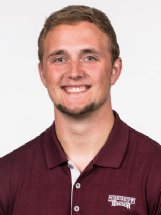 While fraternity houses are decked for the occasion and alumni have begun their descent on campus, the Mississippi State football team (4-6, 2-5 SEC) welcomes FCS foe Abilene Christian (5-6, 4-5 Southland) to town at 6:30 p.m Saturday.

Quarterback Luke Anthony -- who's passed for 2,270 yards and 16 touchdowns this season -- and the Wildcats boast seven receivers with at least 10 catches on the year.

Leading the way are Kobe Clark and Josh Fink, who boast 76 and 63 receptions, respectively, and have combined for 1,543 of Abilene Christian's 2,973 receiving yards this season.

Running back Tracy James has also recorded 34 catches for 270 yards and five touchdowns -- tying him for the team lead with Fink.

"Like most teams that operate in a spread, up-tempo offense, they're looking to isolate playmakers in space," Moorhead said Wednesday. "I think their quarterback does a good job of distributing the ball to all different guys and I think they run the ball somewhat effectively. So you can't focus on one guy -- you've got to have good awareness of where they're all at, where they're all aligned and the routes they run from those formations."

On the ground, the Wildcats boast a two-headed rushing attack in James and Sema'J Davis. While James has shouldered most of the load -- 812 yards and 14 touchdowns on 172 carries -- Davis has been a nice complimentary runner having totaled 590 yards on 93 attempts.

"They did a good job of matching up some of the things we were trying to do," Stevens said of Alabama last week. "They were running with a lot of the deep shots we had called and ultimately the best thing to do with the ball was to check it down and try to have one of those guys make a play."

Facing an ACU defense that ranks a meager 55th of 124 FCS teams, the Bulldogs should have no such trouble Saturday.

Junior running back Kylin Hill will also look to get back on track after a 16-carry, 36-yard performance last week against the Crimson Tide.

Granted the Bulldogs shouldn't need a big day from Hill to down the Wildcats, senior Nick Gibson and freshman Lee Witherspoon should also factor into the run game.

On paper, Saturday's game lacks the high profile matchups that past weeks of SEC play have brought to Starkville. But with a season finale against Ole Miss that should determine MSU's bowl eligibility, the Bulldogs can ill-afford to take the Wildcats lightly.

"It's just another opportunity for us," Stevens said. "We're going to treat everything the same, treat it how we have throughout the season. Your preparation shouldn't change based on an opponent. Everyone should be treating it the same."