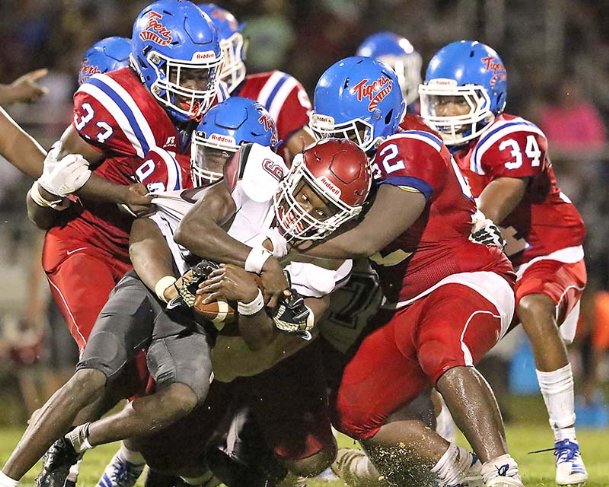 MACON -- The road to Hattiesburg is paved with good defense.

That's what Noxubee County head coach Teddy Young has been telling his team since the start of the playoffs: Play well on defense, and you could be playing for the MHSAA Class 3A championship in a few short weeks.

"We're gonna ride our defense all the way there," senior quarterback and linebacker Marlon Windham said.

Noxubee County mauled Coahoma Agricultural 53-0 at home in the first round two weeks ago. Last Friday, they Tigers traveled to No. 3 Senatobia and shut out the Warriors, too. Windham intercepted three passes and returned two for scores in a 21-0 victory.

"We just knew that our defense was gonna carry us, and they did, so we got a win," Windham said.

The Tigers (8-5) are bringing a resurgent defense reminiscent of past Noxubee County teams into Friday's north state semifinal against Houston (10-3). Shutouts in their two prior games up the total to four on the season -- the Tigers blanked Louisville and Columbus to open the year.

Hatcher and Windham have had key roles on offense, too. The Tigers rely on Hatcher's bruising form in short-yardage rushing situations, and Windham has impressed in his first season at quarterback.

"He's our team leader," Young said of Windham. "He can play both sides of the ball for us. When he's on defense, the defense has become way better. I feel like I've got one of the best players in the state."

Windham credited the Tigers' recent crackdown to an experienced defense returning most of its starters. And while Noxubee County hasn't done much wrong so far in the playoffs, Windham still aims to improve.

"We've been playing alright so far, but we're trying to up it every Friday," he said.

That continues with the matchup against Houston, which Noxubee County beat 19-12 in Macon on Oct. 4. But the Tigers know better than to coast off their prior success.

The Hilltoppers followed the loss with a defeat at the hands of Choctaw County. Then they won four straight games, including playoff wins over Winona and North Panola. A change at quarterback from sophomore Martravius Parker to the more mobile junior Derrion Pulphus adds a new wrinkle for the Tigers.

"We've gotta make sure that we keep him contained and stop him from running," Brown said.

Noxubee County has managed just that in its first two playoff games, shutting down the run games of Coahoma Agricultural and Senatobia, allowing just 50 yards on 23 carries in their first-round matchup and just 41 yards on 21 carries the following week.

The Tigers are more than prepared to bring that dominant defense onto their home field, aiming to get one week closer to their ultimate goal.