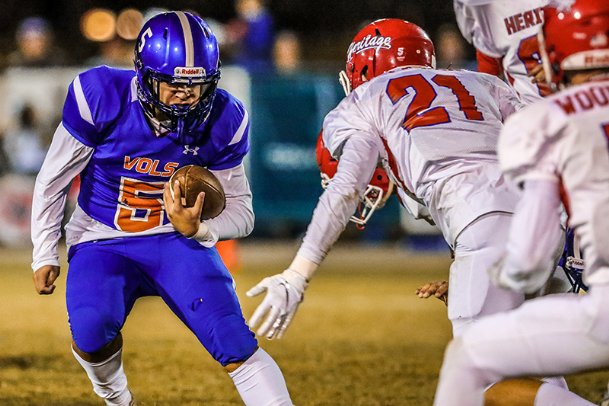 Starkville Academy running back Charlie Guest runs for a first down during the fourth quarter against Heritage Academy on Oct. 18. Photo by: Mike Brown/Dispatch file photo

Seven characters that define the Heritage Academy football team's mission this season flash in big red block letters on the LED video board outside the school's main office Wednesday morning.

It's what head coach Sean Harrison has been preaching since the beginning of the Patriots' summer practices, and it was soon adopted by the players as the team's unofficial rallying cry.

"Everybody has a motto, and especially with me, it ends up being lip service," Harrison said. "But it's something the kids bought into this year."

The Patriots finished in the regular season: A 12-0 record is proof of that. They finished off Pillow Academy by the first half of last week's state semifinal. Now they've got one thing left to finish: rival Starkville Academy, whom they'll face in Friday's MAIS Class 5A championship game at Jackson Academy.

"It's always fun to play that game, and now being able to take it on a bigger stage, really looking forward to it," Harrison said.

If the first game between the two teams is any indication, Harrison has a lot to look forward to. The Patriots whipped the Volunteers 42-7 on Starkville Academy's home field.

But whenever his players relied on "well, last time" when looking ahead at the rematch, Harrison made sure they will take Friday's game seriously regardless of any prior results.

"I think they understand that regular season is regular season, and whoever you play in the state championship game is obviously a really good team to get there, and that's how they treated them," Harrison said.

Both teams know the Starkville Academy squad that the Pats blew out on Oct. 18 is far different than the one they'll see Friday.

"That was a long time ago," Volunteers coach Chase Nicholson said. "Our guys have continued to grow and gotten better and better and better. They've seen a lot more since the last time we played them that will help improve them as football players."

The Vols have made an improbable playoff run in front of hostile crowds. They roared back in the fourth quarter with 28 unanswered points to beat Magnolia Heights. They upset second-seeded Lamar on a last-minute, tiebreaking safety. And they outlasted Adams County Christian in the state semis with a fourth-quarter surge.

Now the Volunteers face their fourth straight playoff game away from home against a heavy favorite.

"We're about used to that, being the underdogs and everybody doubting us and counting us out," junior running back CJ Jackson. "People still count us out to this day like we're not gonna win."

Jackson helped put a stop to that last Friday in Natchez, running for 219 yards and two scores to help the Vols beat the Rebels. He and Starkville Academy's offensive line combine to form a dangerous rushing attack of which the Patriots will have to be wary.

"All of CJ's big games, it's been because of the linemen," Starkville Academy senior defensive back Sam Clark said. "CJ's an awesome athlete. He makes big runs and everything. But the offensive line has been big."

Harrison said the Patriots might shift to four-man defensive lines with senior Ethan Bumgarner providing 'a little extra meat' in order to stop the run.

Smith opened the scoring against the Vols in the two teams' first matchup, but it was through the air where the Pats found the most success. Quarterback Carter Putt threw three touchdown passes. Even Smith recorded a passing touchdown on a trick play.

"We let them catch balls that were uncontested," Nicholson said. "We've got to go up and make some plays on those."

But take it from Clark, who had two interceptions in the Vols' win against Lamar: The Starkville Academy defensive backfield is much improved.

"We've just really gotten our secondary together, gotten our coverages right and everything," Clark said.

The Vols will need a pristine defensive performance to stop a Patriots offense with a wealth of options: Putt has his pick of wideouts among Jared Long, Banks Hyde, Noel Fisher and Sam Hannon. Long, the team's top receiver, had just one catch last week against Pillow Academy, but the Pats are more than willing to spread it out when needed.

"We obviously know they'll be difficult to stop, but we can stop them if we play perfect defense, and that's our expectation," Nicholson said.

Starkville Academy knows it will have to play a perfect game to get another upset win, and the Vols are excited for the chance.

"This is the very last game we could possibly play as a team, the thing that we've been working for, the goal that you reach out for," Nicholson said. "Here it is. If you can't get excited and have fun with this one, there's just something wrong. ... We're gonna go out and play great football Friday night and have a great time."

But for Heritage Academy, it's just a matter of playing the way the Patriots have done all year, ever since those scorching summer practices where their goal first came into view.