Laden with offensive playmakers, Starkville prepares to host Olive Branch in Class 6A second round 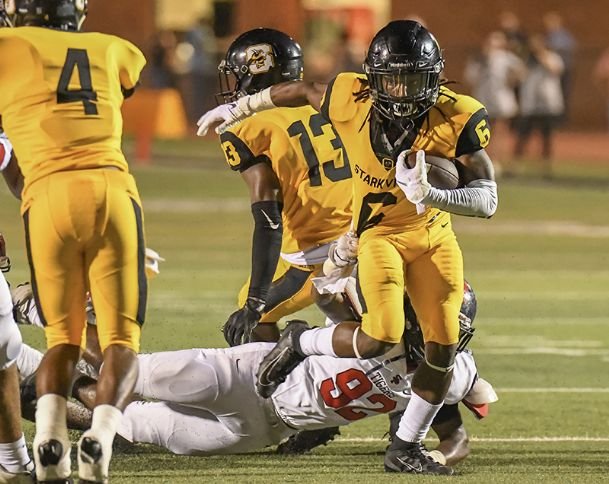 Starkville receiver Rufus Harvey carries a defender after a catch over the middle against South Panola on Sept. 27. Photo by: Austin Frayser/Dispatch file photo

"'Don't think plays,'" he recalled hearing from one of the Yellow Jackets assistants. "'Think players.'"

Jones, at the helm of the state's top-ranked team, has done just that, and Starkville has the players to make it easy.

And it's an ensemble cast for Starkville that's led to such dominance. On offense, the Jackets' playmakers are numerous. Quarterback Luke Altmyer, running back Amariyon Howard and wide receivers Tae Lucious, Joshua Aka and Rufus Harvey provide Starkville with plenty of talent at the skill positions.

Harvey, in particular, figures to be Altmyer's go-to target again Friday. He caught eight passes for 179 yards and three touchdowns against Horn Lake, and Jones knows his importance to Starkville's offensive game plan.

"When I'm thinking about what play to call, I'm just trying to make sure I just find 6," Jones said, referencing Harvey. "Just throw the ball to No. 6. It's always great to have a kid like that on your team who can get everybody going when you need a big play."

But as Jones knows well, Starkville can't afford to bank its success on just one player.

"This time of the year, you just can't be one-dimensional," he said. "You just can't have one guy. It's always good to have guys that can make plays other than relying on one guy."

The Jackets know they don't have to worry about that. Howard, their junior running back, provides another dimension to the offense altogether, and Altmyer can turn to Lucious, Aka or Orien Thompson if Harvey is having an off night.

"I think that's why we've been as successful as we've been this season: We've got a cast of players who can make plays at any given moment, and we're gonna just try to keep it going," Jones said.

As talented as Starkville is on offense, the Jackets know defense will be critical against an Olive Branch team with a pair of star running backs. Both Preston Jeffries and Gary Banks II ran for over 100 yards in the Conquistadors' 24-7 conquest of Madison Central.

"We just want to make sure that we do a good job of containing them and try to box them in and run to the ball and gang tackle," Jones said.

Jones expects Olive Branch, looking another upset, plans to come right out at the Jackets and catch them off guard. But he knows his team has the depth and the playmakers to weather the storm and hold serve on its home field.

"Hopefully we'll play good in all phases and come out with the victory," Jones said.