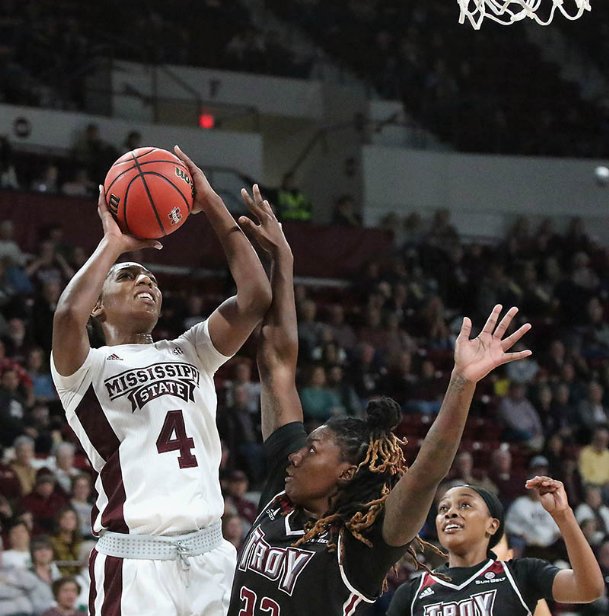 Mississippi State's Jessika Carter (4) shoots over Troy's Kate Rodgers (32) during the second quarter of their NCAA college basketball game Monday night in Starkville. Photo by: Jim Lytle/Special to The Dispatch

STARKVILLE -- Less than 24 hours after Mississippi State coach Vic Schaefer offered a sermon on his team's effort following Monday's 122-82 win over Troy, he hopped behind the podium once more.

Speaking with more than 150 fans on the second floor of the Mize Pavilion for the first of his weekly luncheons, he revisited the postgame spiel.

"It felt like someone died in there, y'all," he said -- only half kidding.

While he didn't beleaguer the point, Schaefer's message was clear -- his squad's talent is there, but the maturity remains a work in progress.

"We are skilled offensively -- we need to do work on things defensively and with rebounding," he said Monday. "It is early, only November, so I always have to keep that in mind. "

Just four games into the season, it's still early to draw many meaningful conclusions from MSU's efforts, but the Bulldogs do remain a team that is fresh-faced and wide-eyed as they replace three starters from last season's Elite Eight team.

Speaking with the media following the luncheon, Schaefer pointed to freshman guard Aliyah Matharu's instinct to crash the boards despite playing point guard as an example of the learning curve. While he appreciates the effort, as the No. 1 guard on the floor he said he needs her in transition defense -- a place the Bulldogs struggled monday night, allowing 32 points on the break.

"Aliyah wants to rebound, but I've got her at point guard, and I can't have her rebound," Schaefer said. " But she wants to get every rebound -- well, I've got to get her back (on defense)."

And while Matharu's youth is just one instance of the Bulldogs' inexperience, there's been plenty to like over the season's first two weeks.

Sophomore Jessika Carter, who was named the SEC Player of the Week, notched back-to-back double-doubles against Murray State and Troy and is averaging 18.8 points and 12.3 points per game.

A different player than the now departed Teaira McCowan -- who was chosen No. 3 overall in the 2019 WNBA Draft -- Schaefer noted her ability to back down defenders and spot up from outside the paint make her more of a finesse threat than her predecessor.

"She's confident and knows that I'm confident in her," Schaefer said. "She's got the green light. There's not a shot that I don't want her to take. She's really improved her range."

Further, while the Bulldogs were outrebounded 51-48 Monday by the Trojans -- the nation's No. 1 rebounding team -- junior forward Chloe Bibby has shown promise on the interior. Though she played just 18 games before suffering a season-ending knee injury, she finished the season averaging just 4.1 boards per game. By contrast, she's notching 6.8 rebounds per night through four games this season.

With Bibby hauling in nearly double as many rebounds as she did a season ago, Schaefer is also looking for more production from freshman forward Rickea Jackson. In a perfect world, he said, both would average about seven rebounds per night.

"I need (Jackson) and Chloe at about seven, and if we can keep Jessika in that eight, nine, 10 range -- now you've got a chance to make up for what you lost in Teaira and Anriel (Howard)," Schaefer said. "You're not going to get two people that take up what you lose in those two, but you can do it by committee."

Speaking on his team's defense and the youth that continues to test him as a coach, Schaefer spent most of the hourlong luncheon cracking jokes -- both at his and his own team's expense.

Having had a night to digest the win coupled with a few quips for the crowd, he's confident Monday's letdown can serve more as a learning experience as his squad looks to make its fourth straight Sweet 16.