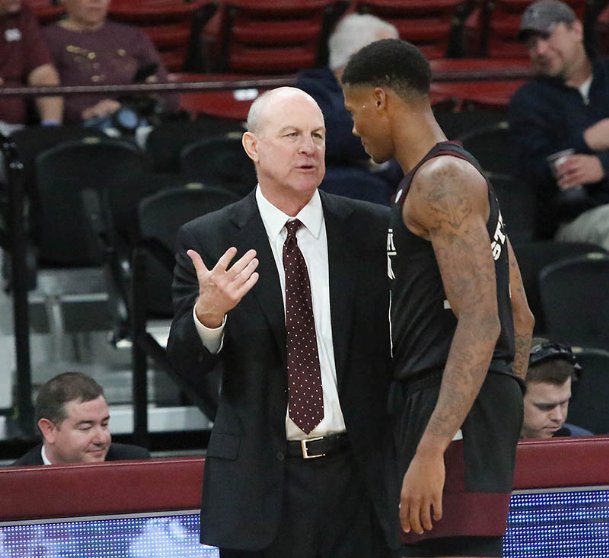 Mississippi State head coach Ben Howland talks to D. J. Stewart (3) during a time-out in the second half of their NCAA college basketball game against the University of New Orleans Sunday in Starkville. Photo by: Jim Lytle/Special to The Dispatch

STARKVILLE -- For the first time this season, the Mississippi State men's basketball team is going on the road.

The Bulldogs will play three games in four days at the Myrtle Beach Invitational at Coastal Carolina's HTC Center in Conway, South Carolina, starting with Tulane at 1 p.m. Thursday.

Depending on the result of MSU's matchup against the Green Wave, the Bulldogs will either play No. 17 Villanova or Middle Tennessee in the afternoon Friday. They'll take Saturday off before playing one of Utah, Coastal Carolina, Ohio or Baylor Sunday at a time to be determined.

"There's a lot of benefits (to this tournament)," MSU coach Ben Howland said. "You're playing really good teams on a neutral court. A lot of teams don't want to play a home-and-home. They don't want to come to Starkville and I don't want to go to Philadelphia. So you get three games where you stay in the same place. It's good for camradie for the players."

Meanwhile, crowds could be small for MSU's games, considering the Bulldogs couldn't play tournament host Coastal Carolina until the final day of the tournament.

"You just have to bring your own energy," MSU guard Tyson Carter said of playing in neutral site tournaments.

Regardless of the outcome of Game 1, Howland and the rest of the coaching staff are going to have a quick turnaround to gameplan for Villanova or Middle Tennessee State.

"When you play that second game, there's not a whole lot of preparation for it in terms of going through their stuff," Howland said. "Especially when you're playing in the afternoon the next day. We'll do a walkthrough that night after we play Tulane and probably do one in the morning as well."

MSU will stick to its eight-man rotation for the tournament, and likely won't make any adjustments to players' minutes despite the packed schedule.

"The toughest part is playing three games in four days," Howland said. "It's a lot of games all scrunched together. We're playing eight guys and those guys are playing a lot of minutes. I am happy it's not like the SEC Tournament where there's no off day in-between. That day off on Saturday helps all teams and it helps the health and safety of the players."

Like MSU (4-0), Tulane enters the matchup undefeated, boasting a 3-0 record. Yet, the Green Wave sit at No. 265 in KenPom.com's rankings (out of 365 teams), not having bested an opponent ranked better than 317th nationally.

According to KenPom.com, Tulane hasn't been efficient on offense (270th nationally in adjusted efficiency) or defense (255), but has forced opponents into a plethora of turnovers, getting a takeaway on 25.2 percent of defensive possessions.

"They're going to play all zone for 40 minutes," Howland said. "They run a matchup zone, a 1-1-3 where they match up with you. You also have to prepare for a press. They have four high-major transfers that are starting for them now."

Tulane is led by Teshaun Hightower, a Georgia transfer averaging 19.3 points per contest. Despite having a potential showdown with national powerhouse Villanova looming, Howland didn't overlook the matchup against the Green Wave.

Bulldogs No. 1 in offensive rebounding

MSU has been all over the offensive glass. The Bulldogs are No. 1 in offensive rebound percentage (45.7) according to KenPom.com, which is partly why MSU's shooting percentage sits around 49 percent after four games. Against New Orleans Saturday, MSU collected 18 offensive boards.

"That's our best attribute this year," MSU forward Reggie Perry said of offensive rebounds. "That's one of Robert (Woodard II's) best attributes, KeyShawn (Feazell) and Abdul (Ado) are all really good at it. I feel like that's one of my best skills. I guess that's just a matter of us being on the court more this year."