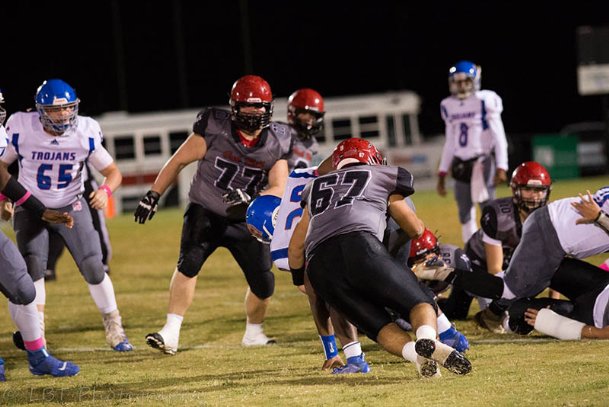 Oak Hill Academy linebacker Jaden Craven makes a tackle against Central Holmes Christian on Oct. 18. Craven received the NFL Way to Play award for a tackle he made that night against the Trojans. Photo by: Courtesy of Liz Thompson

Oak Hill Academy senior linebacker Jaden Craven wasn't sure why. It was Nov. 12, and football season was over -- what could his teammates even be talking about in the team's group message? Whatever it was, he found out, they wanted him to see it.

"They just kept saying, 'JJ, look at this,'" Jaden recalled.

Scrolling up through previous excited messages, it took him a while to find it: a screenshot of a tweet from the official NFL account to its 24.8 million followers. A tweet with his name in it.

"'You're not gonna believe this,'" Jaden told his father, Oak Hill football coach Chris Craven, who was driving him to school while Jaden's truck sat in the shop. "He said, 'What?' And I just started reading."

Jaden broke the news, news he still couldn't believe: He'd won the NFL Way to Play High School Award, a national prize awarded for demonstrating excellent technique on the football field. His award-winning play had been shown on the NFL Network the prior Saturday morning, and his win netted a $1,500 equipment grant for Oak Hill through USA Football. The school is still deciding where to spend its newly acquired funds.

"'You gotta be kidding me!' coach Craven exclaimed. Shocked, looking at his son in pride, he nearly drove the truck into the white fence outside the school on the way into the parking lot. 'Did that really just happen?'

Jaden, excited and overwhelmed, couldn't seem to shake the feeling: Out of hundreds, maybe thousands: him?

"I just never thought that a small-town boy like me from West Point, Mississippi, would be able to have my name get out there and to be noticed," he said.

But for his father and head coach, while surprising, the honor was a well-deserved one -- something to take pride in.

The video clip of Jaden's play aired on the NFL Network's "Good Morning Football" program on Nov. 9, is only about two seconds long. That was all he needed.

Oak Hill trailed 14-0 on senior night against Central Holmes Christian on Oct. 18, and all the momentum lay firmly on the visiting sideline.

On the Trojans' next drive, they moved the ball quickly to midfield. After a first-down stop, Jaden knew how much the Raiders needed a big play.

On Central Holmes' next play, Jaden shot through the offensive line into the Trojan backfield and delivered a perfect form tackle on the opposing running back, picking him up and slamming him down neatly into the turf.

"When I saw it unfolding in front of me, I thought, 'Man, that was textbook right there,'" coach Craven said.

Jaden's big play energized his teammates and killed the Central Holmes drive. The Trojans punted, and Oak Hill scored on its next drive. But the Raiders had dug themselves too big of a hole, and the Trojans ran up the score late. Oak Hill lost, 56-27.

Despite the defeat, the play stuck in coach Craven's mind. Reviewing film the day after, he realized the play was more than just a big hit; it met the criteria of the Way to Play Award for linebackers: recognition, reaction, feel and tackle.

"You could take that particular play, regardless of it being my son or everybody else, and you could use that as teaching how to play linebacker correctly and how to correctly tackle a player," coach Craven said. "It was like a teach tape almost."

With technological help from his son, Craven sent a video highlight of Jaden's play to the NFL.

"'What are the chances of him getting picked for that?'" he thought.

Jaden was asleep and coach Craven was at a coaches meeting in Jackson regarding the MAIS All-Star Football Game (Jaden was selected for the first time) when the video of his play aired on the NFL Network on Nov. 9.

The Cravens didn't know, after all, that Jaden had been selected -- and maybe that was for the best.

"If I would have walked up in there and turned it on and saw them call my name out over my TV, I probably would have ran around the house screaming," Jaden said.

But he didn't know anything until Tuesday, when his teammates saw it on Twitter and promptly freaked out.

"They were like, 'Man, you're famous. Don't forget about us,'" Jaden said. "I told them it wasn't really that big of a deal. I just was on the NFL Network. I don't really think that I'm famous or anything. I just feel like I made a good play and got recognized for it."

Jaden got into school and told his girlfriend as he walked her to class. Proud, she told her teacher, who deputized her to go from classroom to classroom, showing Jaden's video to everyone who would watch.

And when the Oak Hill Academy Facebook page shared the news of Jaden's honor, the texts began to pour in: Friends, friends' parents, and relatives. Some phone numbers for his extended family Jaden didn't recognize and had to clarify with his parents.

"One of my great aunts, she texts me," Jaden said, "and I didn't have her number. And I accidentally said, 'Who is this?' instead of saying thank you and all that. She said, 'It's your favorite aunt.' So now she's gonna have something on me the next time I see her."

No famous athletes congratulated Jaden -- he checked; who wouldn't? -- but plenty of strangers did. On Twitter, the video has nearly 36,000 views.

"I thought it was too good to be true, and I kept telling myself that, 'This ain't happening,'" Jaden said. "There's no way 35,000 people have seen me make a tackle that the NFL said is technical and sound, and, 'This is the way you're supposed to do it.' I never really thought that would happen.

Briefly, Jaden said, the sudden publicity was almost too much.

'Look at this kid'

Coach Craven might have been surprised Jaden's play was picked for nationwide recognition, but he knows it's no fluke, no mistake.

It's Craven's fifth year coaching Jaden on the varsity team, and he knows the effort his son has put in over the years -- whether he was playing linebacker, offensive guard, center or long snapper.

Craven has taught proper tackling since seeing a video of Seattle Seahawks coach Pete Carroll teaching rugby-style tackling -- keeping the head outside rather than leading with it to minimize concussions and other health risks. Jaden said this is the fourth season since the Raiders made the change.

"It's just a smart tackling system, and I believed in that and still do and always will," coach Craven said.

Jaden's play was the perfect example of what the Raiders preach: a so-called "profile" tackle with his head away from the offensive player's body and his shoulder aimed at the player's chest.

It was the definition of a perfect tackle, coach Craven said, and seeing national appreciation is all he can ask for and more.

"That's really cool to get recognized for, hey, 'This is how you play the game. Look at this kid,'" coach Craven said. "And for people from the NFL to recognize that was very flattering and humbling at the same time. So it was awesome."