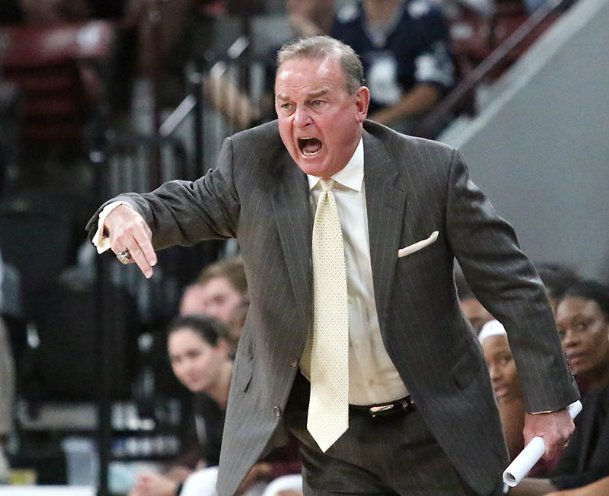 Mississippi State head coach Vic Schaefer shouts instructions to his team during the first quarter of their NCAA college basketball game against Troy Monday night in Starkville. Photo by: Jim Lytle/Special to The Dispatch

Irritated with his squad's tardiness, Schaefer said he was tempted to start four players on the floor and take a technical foul in Monday's 122-82 win over Troy until sophomore point guard Myah Taylor talked him out of it.

Visibly perturbed by his team's inattention to detail postgame, Schaefer maligned his "immature" squad while taking the blame for not having his players ready to play against a Trojan team that outrebounded the Bulldogs 51-48 and scored 32 points in transition to MSU's 24.

"It's nice to score all those points, but all we did was show the country is we can't get back in transition defense, and we have a hard time picking up in transition, and if you play just a little bit harder and add a little more toughness you can get a bunch of rebounds from us," he added.

While Schaefer's frustrations marred his postgame press conference, Monday night did offer a look at an MSU offense that notched its second-highest scoring output in program history just three days after torching Murray State for a school record 124 points.

In the backcourt, Danberry and Taylor coupled for a dynamic one-two punch, finishing with 24 and 20 points, respectively, while the latter also notched a career high seven assists to just one turnover.

But more pressing, it was Carter's second straight double-double -- a 19-point and 14-rebound performance -- that further solidified her place in the MSU lineup.

Now four games into the season, Carter has totaled 75 points and 49 rebounds. By contrast, 2019 first-round WNBA draft pick Teaira McCowan recorded 70 points and 51 rebounds through her first four games a year ago.

Not quite the physical presence of the 6-foot-7-inch McCowan, Carter's refined offensive ability and athleticism were on display Monday.

Swiping a ball off Troy guard Kayla Robinson in the first quarter, she raced through the open court and kissed a right-handed transition layup off the glass for two of MSU's 24 transition points.

Running back down the floor on the ensuing Troy possession, Carter positioned herself on the left block. As Troy guard Japonica James worked her way underneath the hoop for an up-and-under layup, Carter patiently waited before swatting James' shot into the MSU cheerleaders seated beneath the hoop.

"She is so athletic and agile and she can really do some things -- it's just convincing her sometimes," Schaefer said following MSU's exhibition game victory over Lubbock Christian Nov. 4. "Her battle is between her ears in realizing, 'I can be everything he thinks I can be,' because I think she can be a monster."

Through parts of seven-plus seasons at MSU, Schaefer has coached his share of dominant post players. McCowan concluded her career as the program's all-time leader in field goal percentage and rebounds, while center Martha Alwal (2012-2015) became the school's fifth-leading scorer for a forward/center.

And though McCowan and Alwal's names are firmly entrenched in MSU basketball lore, Monday was another night in which Carter seems poised to join her prolific predecessors -- whether Schaefer was pleased with the effort or not.

"We just waited our turn, and now it's here," Taylor said in reference to her and Carter. "We just embrace the opportunity, get better each and every day and embrace the roles that we have."

Monday marked the annual Teddy Bear Toss at Humphrey Coliseum. During halftime, fans threw stuffed teddy bears onto the court that were collected and are to be donated to Le Bonheur Children's Hospital in Memphis ... Jordan Danberry suffered an apparent ankle injury in the first quarter of Monday's win. After a spell on the bench, she returned to action with 7:43 remaining in the second quarter ... The Bulldogs will sign autographs and take pictures at the Hilton Jackson at 5:30 p.m. Wednesday ahead of their game at Jackson State at 7 p.m. Thursday.